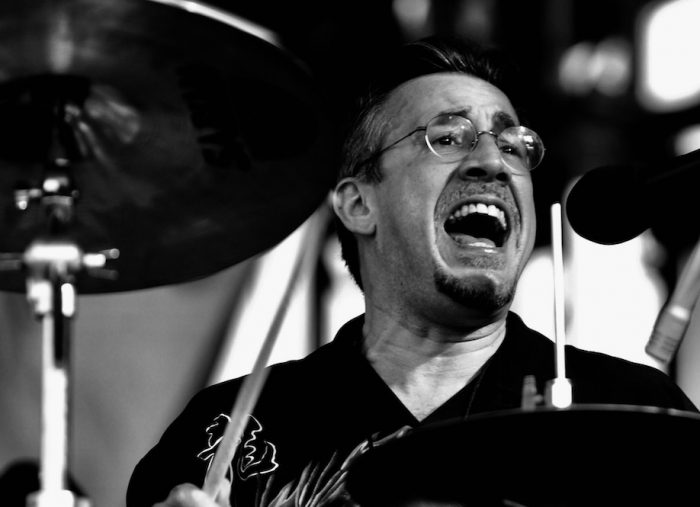 During the 90s, he was the drummer for Mario Bauza’s Afro-Cuban Jazz Orchestra. He appears on the landmark Mario Bauza recordings Tanga Suite (1992), My Time is Now (1993), and 944 Columbus (1993), two of which were nominated for a Grammy.

His Grammy-nominated recordings include:

In 2012 Sanabria, and fellow musicians Mark Levine, Benjamin Lapidus, and Eugene Marlow, filed a historic, class-action lawsuit against NARAS (The National Academy of Recording Arts & Sciences) after it attempted to eliminate several ethnic and regional categories, including the Latin Jazz category and failed.

Sanabria was an associate producer and appeared in the documentary films, The Palladium: Where Mambo Was King, winner of the Imagine award for Best TV documentary (2003), and the Alma award-winning film From Mambo to Hip-Hop: A South Bronx Tale, for which he composed the score. Also, in 2009 he consulted and was featured in the films Latin Music U.S.A., and We Like it Like That: The Story of Latin Boogaloo and composed the score for the 2017 documentary film, Some Girls.

Sanabria is on the New School University and the Manhattan School of Music faculty.
He has conducted hundreds of clinics in the States and internationally under the auspices of TAMA Drums, Sabian Cymbals, Remo Drumheads, Vic Firth Sticks, and Latin Percussion Inc.

Sanabria’s critically acclaimed video instructional series, Conga Basics Volumes 1, 2, and 3, are the highest-selling videos in the history of video instruction and set a standard. Sanabria is also the Co-Artistic Director of the Bronx Music Heritage Center, part of Jazz at Lincoln Center’s Jazz Academy and The Weill Music Institute at Carnegie Hall.

Sanabria’s most recent recording titled West Side Story Reimagined is an impressive reworking of the original West Side Story score. Also, it’s a celebration of the show’s 60th anniversary and composer-conductor Leonard Bernstein’s centennial. Partial proceeds from the sale of the double CD go to the Jazz Foundation of America’s Puerto Rico Relief Fund to provide aid to the island after the devastation caused by the hurricanes Irma and Maria.

Sanabria and a reduced version of his big band are featured in episode 4 of the hit TV series, The Marvelous Mrs. Mazel (2018). Also, he recently was awarded the 2018 Legends of Jazz Lifetime Achievement Award for his work as a musician and educator in the field of Latin jazz by the Jazz Education Network.

Sanabria is the host of the Latin Jazz Cruise, a weekly radio show heard on WBGO FM Jazz 88 wbgo.org on Friday evenings from 9 to 11 pm EST. In 2019, he was named “Padrino (Godfather) of the National Puerto Rican Day in New York City, and the New York International Salsa Congress bestowed him with a 2019 David Melendez Lifetime Achievement Award for his extraordinary contributions to Latin music as a musician, teacher, historian, radio host and dedication to preserving the art of Latin music and Latin jazz.

Bobby Sanabria is a man for all seasons and one of the hardest-working “cats” in the music, bar-none!