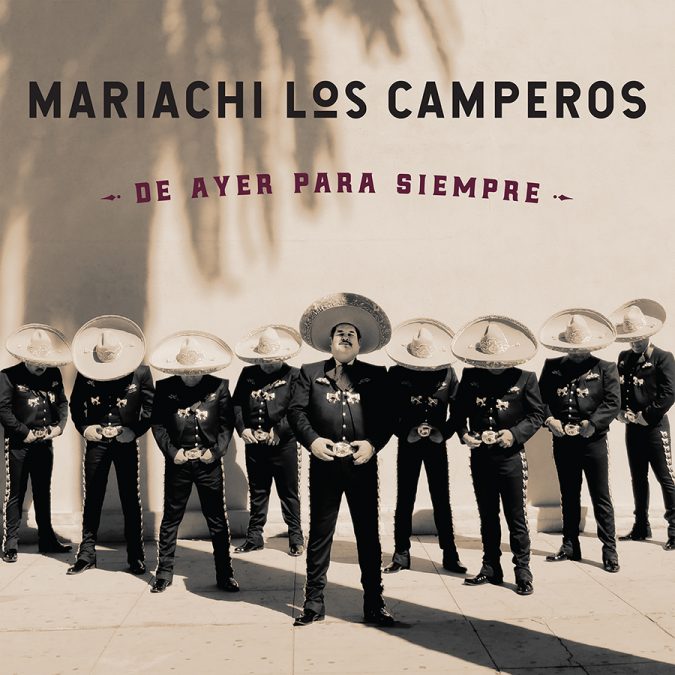 Legendary mariachi ensemble Mariachi Los Camperos has announced the release of De Ayer para Siempre, out August 23, 2019, on Smithsonian Folkways Recordings. Their tenth studio album follows multiple Grammy Award wins and nominations, as well as collaborations with notable musicians such as Linda Rondstadt and performances at Carnegie Hall, the Kennedy Center, and more. It is the first album under the leadership of Jesús “Chuy” Guzmán following the death of iconic bandleader Natividad “Nati” Cano in 2014.

Guzmán remembers being six years old back in Ensenada (circa 1970), watching in rapt amazement as the mariachi bands performed traditional favorites on television, dressed in their exquisite matching suits. Even at that young age, he could sense that this music was in his blood and signified a powerful representation of his family’s cultural heritage. And if anyone of the featured ensembles captured the Mexican ethos perfectly, it was Mariachi Los Camperos, led by maverick visionary and world-renowned music teacher Natividad “Nati” Cano.

Young Chuy had decided then and there that his future was to be a mariachi musician. With the blessing of his musician father, he would spend every evening after school playing old family records and fingering out the notes to teach himself the guitarrón, the vihuela, and the violin (which would later become his instrument of choice). By age nine, Chuy had put together his own band with two of his brothers and a few neighborhood friends. He recalls turning to his guitarrón player after practicing one day and announcing assuredly, “You know, someday I will be a member of Mariachi Los Camperos.”

Nearly five decades later, that childhood declaration reads like prophecy. Not only has Guzmán had the privilege of serving as a member of Los Camperos and premier student of Nati Cano for over 25 years, in 2014 a dying Cano chose Guzmán to succeed him as music director of the group with the task of ensuring it continues to thrive into posterity. Now Guzmán continues Cano’s mission to bring the voice and aesthetic of the Mexican working classes to new audiences and to challenge the racism, classism and high-brow attitudes that have traditionally led the formally trained musical establishment in both Mexico and the U.S. to look down on mariachi as working-class music.

“Un sueño …a dream,” says Guzmán of the experience. “To be in charge of this historical institution that is Mariachi Los Camperos is a privilege, it’s a lot of responsibility and a challenge for me within the mariachi world.”

Mariachi comprises a central aesthetic building block in the construction of a unified national identity in Mexico, in large part, due to its embodiment of mestizaje: the racial and cultural mixing of Spanish and Indigenous culture. This unique blend of cultural traditions, social attitudes, and musical expression metamorphosed into a new regional musical tradition that became wildly popular throughout Mexico, Latin America, and Latino enclaves of the U.S. as it was featured in hundreds of movies, radio programs, recordings, and stage performances throughout the mid 20th century. The sound of mariachi has since become a Mexican national symbol, expressing collective authenticity through the blood, sweat, and tears of its performers and its performances.

De Ayer para Siempre is a testament to Guzmán’s commitment to that heavy sense of responsibility to heritage and the challenge he feels to carry it forward through dynamic new manifestations. The album is a masterful embodiment of the complement of tradition and creativity, featuring new songs in traditional styles, as well as familiar classics presented in creative new arrangements. With a carefully curated selection of songs from various regional styles, the album reads like an ethnographic road map of mariachi, from the driving rhythms and sexual innuendo of son jaliscienses like “El Pasajero – The Passerby,” and the passionate, often embittered heart-ache of the canción ranchera (country song), through the spirited, harp-driven son jarocho’s such as “Pájaro cú”, and the swooning boleros, like those of “María Grever,” “Estrellita,” and “Mexicali Rose,” titles that little by little have been forgotten and are special to Guzmán because they are songs that he grew up with.

“Our goal in choosing these songs;” says Guzmán, “is that the people will enjoy the selection and the musical arrangements with a combination of emotions honoring the composers and a process of creating a musical memory, by preserving the songs that have been forgotten.”

This process involves dressing up old songs in new musical attire in a way that complements the original. For Guzmán, this music that his forbearers have composed already has a unique sound, so he only makes a few changes to the music. “I believe that there should always be a combination of preserving and improvising. Even though creating new music is not bad, the compositions can lose their originality if one isn’t conscious. There are songs that already have made their mark and to make too many changes is to lose the essence of the song. We only make it sound a little fresh and new.”

Simultaneously, Guzmán extends this philosophy of balance toward continuing a more personal commitment to education and social change. Since the founding of Mariachi Los Camperos in 1961 it was a central mission of Nati Cano to expand mariachi performance and its appreciation beyond its traditional venue, the cantina, and to make forays into new performative landscapes: international stages, respected music schools, and prestigious concert halls. To this end, Cano always insisted his musicians focus on professionalism. “Mariachi Los Camperos always had a different sound and interpretation than other mariachis,” reflects Guzmán. “They had discipline, a passion, and a lot of dedication. Nati’s leadership and focus were always in attaining perfection and in truly feeling the music.”

In transition under Guzmán’s new directorship, Los Camperos acquired new blood, young musicians who want to belong in Mariachi Los Camperos. Recalling his own childhood dream of one day performing with the premiere group, Guzmán, like Cano before him, puts a heavy emphasis on his personal mission to educate the youth–and the world–about mariachi.

Nowadays, mariachi classes are available at all levels for students to learn, both in Mexico and in Los Angeles where Guzmán has now taught mariachi at UCLA for 29 years. But Guzmán’s generation didn’t have that luxury. Guzmán himself came up the ranks, earning his musical chops and training the hard way, playing for several years al talón (roughly translated as “heeling it”), in which musicians walk from customer to customer in a bar or a restaurant and charge by the number of pieces played.

Guzmán is pleased to have the vehicle of formal educational establishments to teach new generations about mariachi and sees it as a sign that Cano’s vision of bringing mariachi out of the cantina and into the arena of formative musical performance is becoming a reality.

“I am trying to preserve mariachi music in the youth through performance and dedication in the classroom. The message is preservation, passion and to keep the mariachi music alive.”