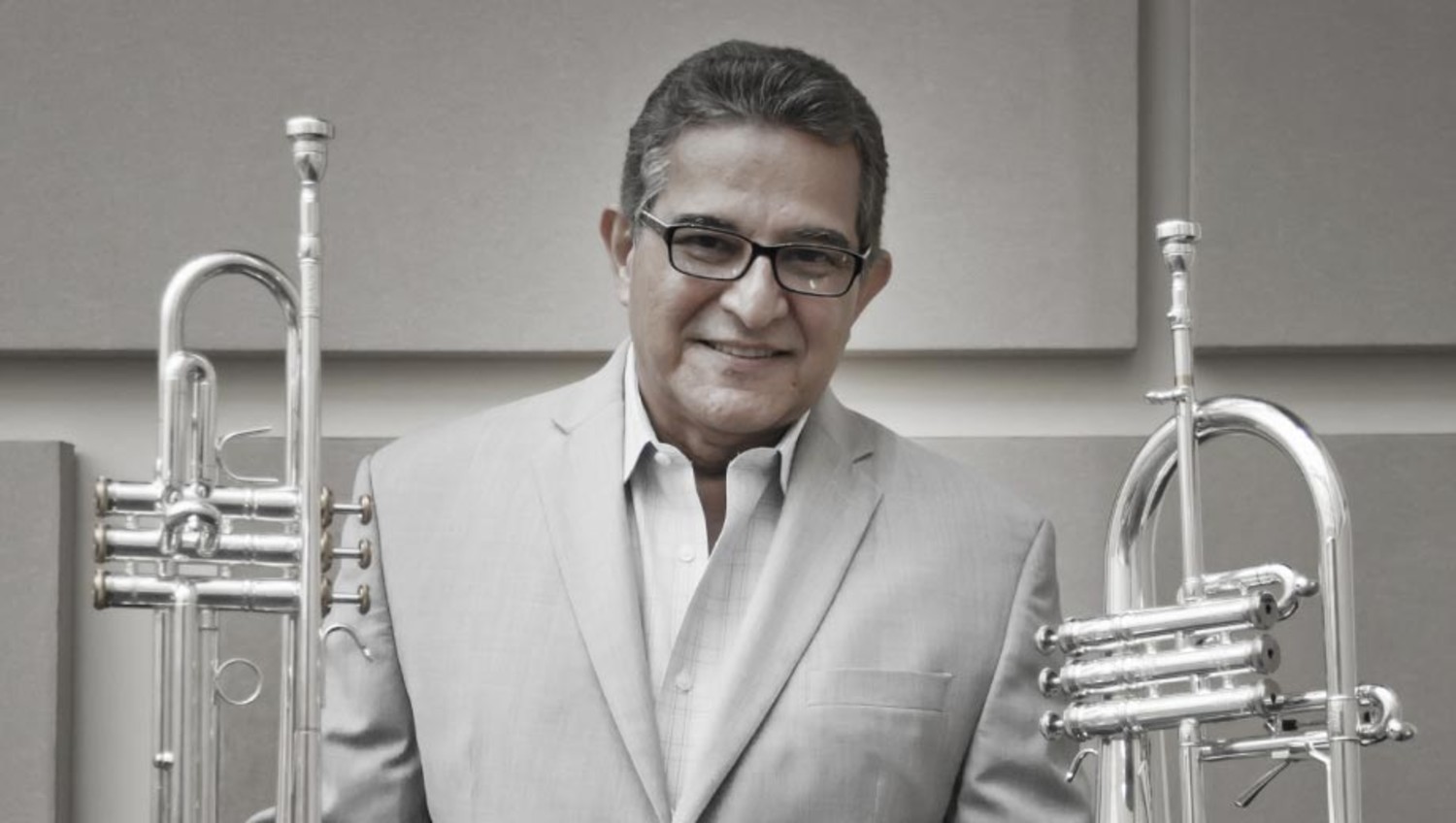 Luis Ortiz, also known as “Perico” is a painter of emotions. From Classical to Pop, from Pop to Jazz, from Jazz to Latin-Jazz to Salsa, his music reflects the vast experience of a career that spans more than thirty years.

He has worked for all the TV stations in Puerto Rico and served as the first trumpeter for the most renowned hotels on the island. Also, he has accompanied great artists such as Ann Margaret, Dionne Warwick, Diahann Carroll, Trini Lopez, Engelbert Humperdinck, Sammy Davis Jr., Tony Bennett, Paul Anka, The Supremes, and many well-known international artists.

In 1970 Ortiz moved to New York where he developed as an artist, trumpeter, arranger, composer, and executive. He became one of the greatest trumpet players in the Latin American field as well as a renowned arranger, composer, and producer. Also, he developed Sunrise Productions, Perico Records, Dialen Promotions Inc., Dialen Publisher (with representation in the U.S., Europe, and Japan), and Dialen Recording Studios.

1977 Recorded his first Solo Album under the label Turnstyle (a subsidiary of Latin Percussion Corp.)

1978-80 – Established his Orchestra. Wins “Diplo” Trophy as the best trumpeter of Puerto Rico. In New York during the Latin New York Magazine Awards celebrated in 1978 he was awarded the following trophies: Trumpet Of The Year, Arranger Of The Year, Best Orchestra Of The Year, and Musician Of the Year.

1981-87 – Acknowledgment received in 1981 by Association De Cronistas De Espectáculos {ACE} as best interpreter of Salsa/Música Caribeña with Julio Iglesias. In 1982 he received another Acknowledgment by ACE as Best New York Orchestra. During the Summer Of 1987, he composed and directed the score for the movie “Mondo New York” with Johnny Pacheco. Also, he traveled the U.S.A., Puerto Rico, South America, Central America, and Europe with his Orchestra.

1988-93 – In 1988 Ortiz produced, arranged and directed Mr. Barry Manilow. Project “Hey Mambo”. During the same year, he opens his company Dialen Promotions Inc. Become the first Latin company that offers multiple services in the production and recording area with his own recording studios (3 Rooms) Analog/Midi. Through his involvement with the company, “Perico” gets involved in the area of “advertising” producing, composing, sound engineering, and arranging “Jingles” for Radio and Television, Videos, and Film Scoring. In 1992 Ortiz and his Orchestra toured Japan.

1995 – Participated as a guest artist in a Tour for the country of Colombia (RMM Records “La Combinación Perfecta”) where he performed, in a total of four concerts. As a Latin Jazz Artist “Perico” performs with his Latin Jazz group at the Puerto Rico Heineken Jazz Fest ’95.

1999 – He was the Musical Director for Iglesia Del Nazareno De Levittown ministries. He also developed a music school (Harmony School of Music). He also opened a recording studio at the school facilities to serve as a producer, arranger, computer programmer, musician, etc. It will serve his company (Suave Instrumental) as well as outside work (productions, arrangements, record companies, etc.) During the month of January “Perico” performed in Panama. Also, Roberto Lugo accompanies “Perico” during his concert. After his last performance together in Miami, Luis Perico Ortiz and Arturo Sandoval meet again. This time in Puerto Rico. It is a historical event since is the first time they perform together on the Island. Perico performed as a guest artist for the Historical Tribute to Hector Lavoe in Puerto Rico.

2000 – During the beginning of the year 2000 Perico established his commitment to Harmony School Of Music. He released four of his master’s catalogs in CD format. They are: “Sabroso”, “Sabor Tropical”, “El Isleño” & “In Tradition”. They include vocals by Domingo Quiñones and Roberto Lugo. Also was released in CD format his first solo album, “My Own Image” originally under Turnstyle Records, a Martin Cohen company (Latin Percussion). Perico just finish his latest production with guest artists such as Domingo Quiñones, Bobby Valentin, Papo Lucca, Cachete Maldonado, Endel Dueño, Elias Lopéz, Rafi Torres and many more. The project is called “Jamming” and will be released under the AJ RECORDS label. One of the most important assets to his life is ISABEL ANNA, his niece, born March 31-2000.

2001 – “Perico” is currently serving as Producer and A & R Director for AJ Records (sister company of Casa De Los Tapes). He just finished the production of Tommy Olivencia 40 Aniversario/LIVE

2004 – Produced the first SALSA GOSPEL concert and DVD. He participates as a professor of the Conservatory of Puerto Rico. His role appoints him as a Faculty Member for the Jazz Performance & Caribbean Music Bachelor Degree. He produces a tribute concert and DVD for Marvin Santiago. Produces a Christmas production concert and CD-DVD for ACISUM GROUP & UNIVERSAL MUSIC.

2005 – Perico composes, arranges, orchestrates, and produces the soundtrack for the TV movie “Pa’ Eso Estamos by Jacobo Morales. Second-year in a roll he is invited to be part of the production staff for the BANCO POPULAR Christmas special. He is selected to be the intellectual artist for the TV series HUELLAS MUSICALES. The producers will work to create a retrospective of his musical contribution so far to music in general.

2006 – Currently very active with the Conservatory Of Music Of Puerto Rico and his business (Suave Instrumental & Dialen Publisher.) Visits Columbia Collage of Chicago to give Master Classes and concerts with Jon Faddis, Eddie Gomez, and the Conservatory of Music of Puerto Rico Jazz Performance and Caribbean Music faculty. Produces Japanese flutist Rie Akagi. He visits France as a guest artist for the TORO & SALSA Festival (September 9-11).

2007 – Perico was officially named “Artist In Residence” for the Music Conservatory of Puerto Rico along with fellow musicians Eddie Gomez and David Sanchez. He represents the Jazz Performance & Caribbean Music Bachelor Degree. March 23 he started his world tour in Puerto Rico with his original singers, Rafael De Jesus y Roberto Lugo. He will perform throughout the year with his Salsa Band, Latin Jazz Big Band, and his Latin Jazz Combo as well as his Master Classes in Schools, Colleges, and Universities around the globe.

2008 – At the Forty-Five (45) Graduation of the Music Conservatory of Puerto Rico, Maestro Luis Perico Ortiz was invited to be the Main Speaker to the 2008 Class. An Honor and historical event in his life. Perico enter the CMPR in 1966 and his dream came thru when he graduates first class for the Jazz & Afro Caribbean Bachelor degree 2008. He was assigned to be the Artist Director for the new Plaza Gigante de la Musica of Carolina, Puerto Rico.

2009 – Perico is assigned to be the Music Consultant for Escuela De Bellas Artes De Carolina. Also, he is the current Artist Director for Special Events at Municipio Autónomo de Carolina. He went for the first time to Peru to the prestigious event CHIMPUM CALLAO. He played in front of a record audience of 42, 000 people.

2010 – This year is emblematic of “Perico” since he is celebrating his 50th Anniversary as a musician. In January was given the PREMIO SAN SEBASTIAN for his career achievements. He also went to the Lehman College where he performed with his founder’s singers Rafael de Jesus and Roberto Lugo. He directed and produced for Carolina, P. R. the 6th Festival Internacional del Jazz de Carolina. He performed with Paquito D’ Rivera, Mario Grillo, Tito Puente Jr., Tito Rodriguez and Gilberto Santa Rosa.

In November he visited New Mexico where he was the invited guest artist for the New Mexico Symphony Orchestra. He also performed a Latin Jazz Concert and a Master Class at the New Mexico University.

2011 – Luis “Perico” Ortiz was the coordinator of the 3rd International Bolero Fest for Carolina, Puerto Rico. The guest artists for the two days event during the month of April were Lourdes Robles, Nydia Caro, Elías Lopés, Braulio, Lilly y su Gran Trio & Trio Los Condes. During the month of August, he was the Artist & Musical Director for the 7th Festival Internacional del Jazz de Carolina, which was dedicated to the art of the piano. His guests were Mariano Morales, Luis Marin, Angel David Mattos, Yan Carlos Artime & Michel Camilo. He conducted his big band with a superb night full of guesses all in the Piano Sit. On December 2nd, Luis was the Artist and Musical Director for the Encendido de la Navidad of Carolina featuring Tony Vega, NG2, Pedrito Guzman, Juan Vélez and El Gran Combo de Puerto Rico.

On December 23 after almost a year of hard work, Luis was the composer, arranger, and Artist, and Musical Director of one of the most important concerts in his career, the Inaugural Concert of the Museo del Niño de Carolina. He conducted a Symphonic Orchestra with a 30-piece Male/Female Choir and a 56 member Dance Group from Escuela de Bellas Artes. Also, he collaborated with the Maestros Cucco Peña and Frankie Suárez.

2014-2020 – “Perico” continues as the cultural adviser for the town of Carolina. In 2015 he inaugurated the Hospital San Fernando de la Carolina and in 2016 he officially inaugurated the Orquesta de Conciertos de Carolina.

Ortiz was honored for the second time in 2019 where it dedicated the 36th Día Nacional de la Salsa Z-93 before a crowd of 20 thousand. Also, he produced his first theatrical concert, Luis Perico Ortiz – MI VOZ. In 2016 Ortiz was invited to be the Main Speaker for the 53rd graduation of the Conservatorio de Música de Puerto Rico, of which he is an alumnus.

Ortiz is currently writing his biography.

1. My Own Image – Turnstyle Records 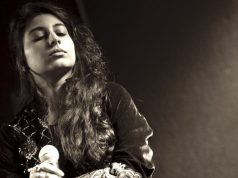