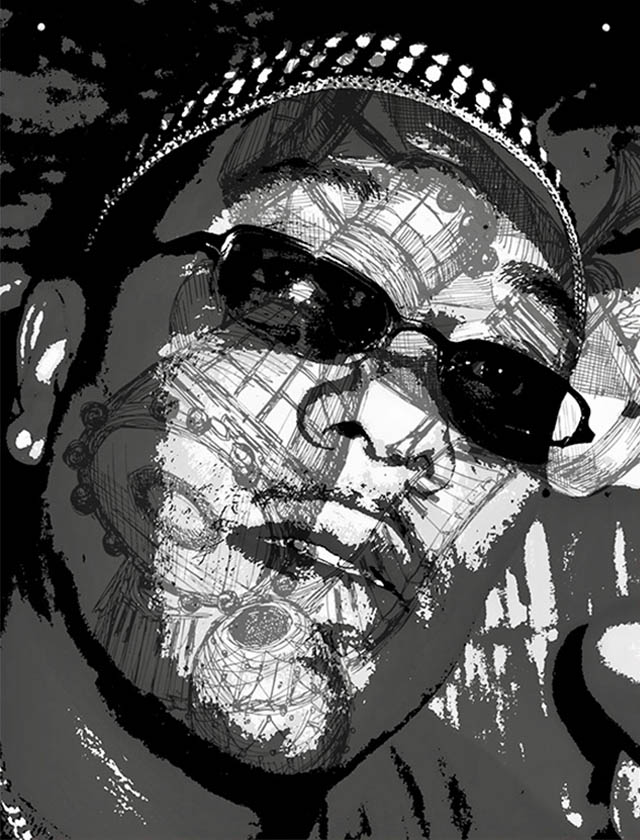 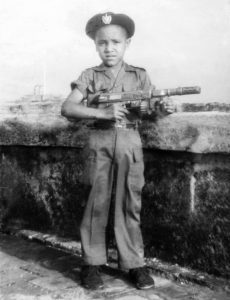 renowned rumbero and founder of the rumba ensemble Yoruba Andabo, Pancho Quinto, started “Juanito” on the drums. In his teens, Oliva studied with legendary percussionists Jose Luis Quintana “Changuito” and Tata Guines, among others. Also, he idolized and was strongly influenced by Chucho Valdes and Irakere, and drummer Jorge Alfonso “El Nino.”

Oliva graduated from the Conservatorio de la Habana Amadeo Roldan, where he was exposed to the music of Charlie Parker, Herbie Hancock, Thelonious Monk, John Coltrane, and Dizzy Gillespie. Oliva’s passion for jazz was so great, he dubbed himself the “Jazz Rumbero.”

ARRIVAL IN THE U.S.

Oliva arrived in the U.S. in 1980 with compatriots such as Orlando “Puntilla” Rios, Daniel Ponce, and Ignacio Berroa, among others. His past biographies fail to mention that Oliva was passionate about baseball and would have pursued a career as a professional athlete were it not for the sport’s discriminatory practices.

OLIVA AS A SIDEMAN 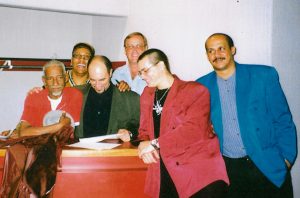 The same year Oliva relocated to New York and was a member of Orlando “Puntilla” Rios’s “Nueva Generacion.” Next, Oliva ventured to Puerto Rico and performed with the progressive ensemble, Batacumbele (Oliva’s name does not appear on any of the ensemble’s recordings). Also, he played lead percussion on Zaperoko’s classic recording, “Cosas de Locos” (Montuno Records).

Shortly after, Oliva moved to Los Angeles and found work with the renowned Puerto Rican percussionist, Willie Bobo, and his Pan-American band. “When Willie saw me play for the first time, he moved Michito Sanchez to the bongos,” said Oliva to Luis Tamargo in a 1988 interview. “From that point forward, I was the lead percussionist. Willie noticed that I have access to the Yoruba tradition and allowed me to explore that part of my personality. He also gave me the name ‘Long John’ (for his ability to play tasty, lengthy solos).

After Willie died (1983) Oliva participated in projects with Rudy Regalado, Bobby Matos, Eric Bobo and Strunz, and Farah, who he toured and performed with for seven years. Also, Oliva was the musical director and lead percussionist for the groups Okanise and Nueva Okanise.I

OLIVA AS A LEADER

In 1999, Oliva met Peggy Jo at a Muñequitos de Matanzas concert at the Wiltern Theater in West Hollywood. In 2000, they wed and made a vow to pursue a dream. In 2001, Oliva and Peggy Jo founded Lucumi Productions and the AC (Afro-Cuban) Project was conceived.

The repertoire ran the gamut, from “Cubanized” American standards to traditional rumba, songo, elements of the Yoruba tradition, and jazz improvisation. Shortly after Lucumi was released, Nelson Rodriguez of Latin Beat magazine declared it “One of the top 100 Latin Jazz Recordings of All Time.” Listen to: Zarabanda Culle.

In 2004, Oliva released “Cuba Rico,” whose title represents the “two sides of Oliva’s heart” (Cuba and Puerto Rico). The same year Oliva altered the title to “Buleya” (after his mother) and the tracks. Why Oliva made the changes are unclear. The theory is, Oliva was entering a new phase in his life and career. Regrettably, he died the same year.

After Oliva’s death, the AC Project performed at the KCET 24th Annual Christmas Celebration, performed at a high-profile fundraiser at MOCA with host Paula Abdul, showcased the IAJE Conference in New York City (after receiving the Best Latin Jazz Award), and received a standing ovation at the Long Beach Jazz and Playboy Jazz Festival (Pasadena Rose Bowl) and various festivals, including the Jazz Aspen Snowmass and the Utah Arts Festival, among others.

Also, in 2013, under the direction and vision of trumpeter Josiel Perez, the AC Project released “Conga Buena,” which was well-received and produced several hits, including Tamaya Tumbao and El Dano Esta Hecho.

Twenty years after his death, Oliva’s recordings are arguably forgotten classics. Thanks to the efforts of producer and graphic artist Peggy Jo Oliva, a “Lucumi 20th Anniversary 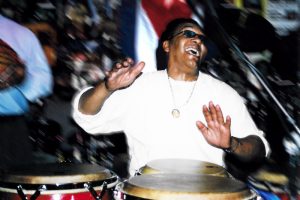 Collector’s Box Set” is in the works. Set to be released in 2023 (date to be announced), “Lucumi” will expose Long John Oliva’s music to a new generation of listeners and hopefully, lead to a renewed interest and appreciation of Oliva’s body of work.

In this writer’s view, and in the opinion of Oliva’s peers, enthusiasts, and listeners who were on the scene when Oliva’s music ruled the airwaves, his name deserves to be mentioned in the same breath as Pancho Quinto, Tata Guines, Jose Luis Quintana “Changuito,” Mongo Santamaria, Francisco Aguabella, Willie Bobo, Tito Puente, Candido Camero, Carlos “Patato” Valdes, Anga, Jerry Gonzalez, Ray Barretto, and other legendary percussion masters.

Brace yourself for the long-awaited release of Long John Oliva’s seminal recordings as a leader, beginning with “Lucumi” in 2023 (date to be announced).

DISCOGRAPHY AS A SIDEMAN