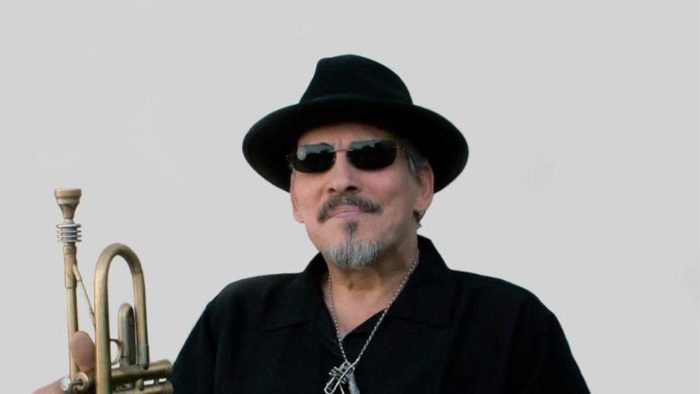 Jerry González was born in 1949 in Manhattan and raised in the Eastchester section of the Bronx. He grew up surrounded by Latin, Afro-Cuban and jazz, establishing his musical appreciation and future work as an artist. His father, Jerry González, Sr., was a master of ceremonies and lead singer for bands during the Palladium era.

In junior high school, Jerry played trumpet and congas and jamming with local groups. After deciding this was his calling, González completed his formal studies at New York College of Music and New York University. He started his professional career playing with Lewellyn Mathews in the 1964 New York World’s Fair. In 1970 he joined Dizzy Gillespie. With Gillespie’s support and encouragement, González fused African-based rhythms with jazz elements without compromising the essence of either.

The next year, González joined Eddie Palmieri’s band until 1974, when he moved on to work with Conjunto Libre, the group led by timbalero Manny Oquendo and Jerry’s brother, bassist Andy González. Also, Jerry and Andy were the founders of the Conjunto Anabacoa and later the Grupo Folklórico y Experimental Nuevayorquino, which recorded two albums: Concepts of Unity (1974) and Lo Dice Todo (1975). Jerry performed with Tito Puente’s ensemble (1984 to 1999), McCoy Tyner’s band (1984 to 1990), and Jaco Pastorius’s band (1984 to 1987).

In 1979, González recorded Ya Yo Me Curé, his first as a leader. Afterward, he formed (the original) The Fort Apache Band, which included his brother Andy and Kenny Kirkland, Sonny Fortune, Nicky Marrero, Milton Cardona, Papo Vázquez and the late Jorge Dalto. The ensembles’ first two albums: The River is Deep (1982), and Obatalá were recorded live at European jazz festivals in Berlin and Zurich. In 1988, Rumba Para Monk was received the Record of the Year award from theFrench Academie du Jazz. Shortly after, the band went from 15 members to a sextet featuring Larry Willis (piano), Andy González (bass), Steve Berrios (drums) and Carter Jefferson (saxophone) and Joe Ford (saxophone).

Then Fort Apache released Earthdance (Sunnyside,1990) and Moliendo Café (Sunnyside, 1991). These albums demonstrated the band’s ability to play Latin-inspired jazz with genuine sensitivity and virtuosity. After Moliendo Café, Carter Jefferson died and was replaced by John Stubblefield. 1994 saw the release of Crossroads, followed by Pensativo in 1995. Each earned Grammy nominations. Also, the ensemble was awarded The Beyond Group of the Year by Down Beat Magazine (1995, 1996).

1996 saw the release of the highly acclaimed Firedance, recorded live at Blues Alley (Boston). Fort Apache was voted Best Jazz Group by Playboy magazine’s Reader’s Poll (1997) and Downbeat’s Beyond Group of the Year (1999).

The group paid tribute to Art Blakey and the Jazz Messengers on their 2005 release Rumba Buhaina.

González’s popularity rose after his contribution to the documentary film Calle 54, directed by the Oscar-awarded Fernando Trueba, where Tito Puente, Paquito D’Rivera, Gato Barbieri, Chucho Valdés, Dave Valentin, and Israel “Cachao” López and other leading names in jazz participated. After the premiere of Calle 54 in 2000, González relocated to Madrid and immersed himself in the flamenco scene.

His time in Spain resulted in Los Piratas del Flamenco (2004) with the flamenco guitarist Niño Josele, the percussionist Israel Suárez “Piraña” and the singer Diego El Cigala. A novel approach is evident, as it was done without the bass, drums or piano and presented jazz and flamenco with a twist. The album was nominated for a Grammy Awards in the Latin jazz category. Also, it won the Critics Award in New York for best Latin-jazz album of the year. Throughout his years in Spain, Jerry collaborated with Enrique Morente, Paco de Lucía, Javier Limón, and Jorge Pardo, Martirio and Andrés Calamaro.

His next releases were with the Spanish contrabass player Javier Colina, a duet album with the flamenco guitarist Niño Josele and Fort Apache Live at the Blue Note (2012), which has yet to be released.

In October 2018, Jerry Gonzalez died of smoke inhalation as the result of a fire at his home in Madrid.

Jerry was affectionately known as the “last pirate of the Caribbean.” His body of work and his legacy precede him.