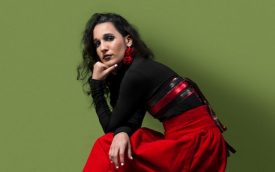 iLe is the stage name of Ileana Mercedes Cabra Joglar. Before becoming a soloist, she was best known as a singer and rapper with the group, Calle 13 under the nickname PG-13. She is Visitante’s (Eduardo Cabra Joglar) sister and Residente’s (Rene Perez) stepsister.

A formerly trained singer, ile is the daughter of actress Flor Joglar de Gracia and musician and producer José Cabra González. Her vocal and piano studies began while she was in elementary school and sang in the choir. In high school, she worked with Puerto Rican soprano Hilda Ramos and Cuban singer Gema Corredera (the latter of Gema y Pavel). One of her biggest influences is the singer La Lupe.

At 16, Residente asked her to sing on a demo he and Visitante were working on. The track “La Aguacatona” became Calle 13’s calling card. Afterward, she became a collaborator on their singles and albums and featured in their videos. When not in school, she toured with Calle 13 and became an integral part of their stage show.

In 2012, she participated in Puerto Rico’s Banco Popular TV Christmas Special and was chosen by boxer Miguel Cotto to sing the Puerto Rican National Anthem before his fight against Floyd Mayweather, Jr.

In 2015, iLe announced her stage name and a solo album of Afro-Caribbean boleros, Bugalus, mambos and, Danzones with co-producer Ismael Cancel. Most were classic tunes, but there were also songs written by her father, sister, and grandmother. The set featured some of Puerto Rico’s most famous musicians, including her father, brothers, Cheo Feliciano (in his final recorded appearance), Piro Rodríguez, Charlie Sepulveda, Bayrex Jiménez, and Ciro’s Fofé Abreu. Her first single and video, “Canibal,” was issued in April, followed by the release iLevitable, which placed in the Top 15 of the Latin albums charts.

On May 10th, 2019 ile will present Puerto Rico and the world with her intimate sophomore album, Almadura. A play on the word Armadura (armor), the title literally means “strong soul.” Fans can expect a varied repertoire and original material (the exception being “De Luna,” written by her sister Milena Perez), and a focus on the sounds that move her, including Bomba and Salsa rhythms. Special guests include Eddie Palmieri.