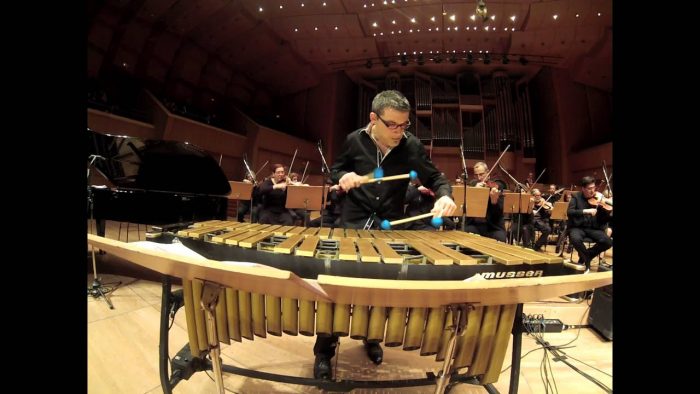 “Christos Rafalides is forging a new direction for the vibraphone/marimba, one that ricochets off of the likes of Joe Locke, Bill Ware, Stefon Harris, and Gary Burton. Rhythmically driven and spatially exact, Christos Rafalides’ music reaches deep into the Latin consciousness and pulls out the perfect vibe.” All About Jazz

Rafalides has toured extensively throughout the world as a leader and guest soloist. Highlights include performances with the Lincoln Center Jazz Orchestra and Wynton Marsalis, a tour with the Charles Mingus “Epitaph” Band featuring bassist Christian McBride and conductor Gunther Schuller, performances at the Kozani Jazz Festival, a recording with the Harmony Ensemble of NY of Henry Mancini’s “Peter Gunn” featuring Lew Soloff. Also, a tour through India and China with Dario Boente, a guest faculty member at the Zeltsman Marimba Festival, and an Artist Residency at the “Music Village” in Greece.

Christos has led groups at many of New York City’s top venues including the Blue Note, the 55 Bar, the Jazz Standard, and Dizzy’s Club Coca-Cola.

Influenced by his elder brother, which led him to the piano, Rafalides began playing music in 1979. At age fourteen he began studying classical percussion, and at twenty he started working with orchestras around Greece.

Initially, Rafaildes intended to pursue a career as a classical percussionist until he heard the pianist George Cables. “Here was this guy playing with his shoes off, conveying so much feeling through his instrument. I knew I wanted to be able to express myself like that.”

In the early ’90s, Rafalides received a scholarship to Berklee College of Music and moved to Boston where he completed his Bachelor of Arts degree studying under Ed Saindon.[16] Following this, he moved New York City to achieve a Master’s degree and study with acclaimed jazz vibraphonist Joe Locke at the Manhattan School of Music. During this time Rafalides began to perform within the New York City jazz scene alongside artists including Ravi Coltrane, Antonio Sanchez, Donny McCaslin, Hector Martignon, and Ron Affif.

Rafalides began a recurring band project in the early 2000s named ManhattanVibes. ManhattanVibes sought to combine Latin and other world musical styles imparted by the band members and their stylistically diverse backgrounds. In 2002 ManhattanVibes released a self-titled CD featuring of Grammy award winner John Benitez on bass and Steve Hass on drums and Randy Brecker on trumpet. Jazz Times’ magazine’s 2002 Year In Review issue labeled the recording was as, “…one of the top-ten jazz recordings of 2002”.

By 2005 Rafalides had begun a collaboration project with his previous mentor, Joe Locke, which lead to the release of the album ‘Van Gogh by Numbers.’ This album was debuted live in front of an audience at the 2005 PASIC convention in Columbus, Ohio.

In 2007 Rafalides released a duo album titled ‘Dark Sand’ with American pianist Sergio Salvatore. The duo performed the material at Carnegie Hall, Lincoln Center, and cities throughout the US and Europe. Rafalides was also hired to perform a series of concerts with the Charles Mingus’ Epitaph’ Band which featured conductor Gunther Schuller and bassist Christian McBride. Also, he performed with Wynton Marsalis and the Lincoln Center Jazz Orchestra at Lincoln Center during this year.

In 2008 Rafalides began a collaboration with Mimis Plessas a well known Greek composer which culminated in the release of two projects based on Plessas’ music: the album’ Ηχώ/Echo featuring Evi Siamanda on vocals which consisted of the music of Mimis Plessas; and the duo recording ‘We Two’ featuring Mimis Plessas on piano and Christos on vibraphone.

In 2014 Rafalides teamed up with Greek bassist Petros Klampanis to release the duo Bass/Vibes album ‘Point Two.’ Stylistically, Point Two combines a number of their influences including styles that are Middle Eastern, Greek, and Latin based to affect the original compositions, standards, and folk songs that make up the album.

In addition to ‘Point Two’ Rafalides collaborated with the ‘Chronos Ensemble’ in 2014 working alongside Greek singer-songwriter, Dimitra Galani. The group went on to release the album ‘Chronos Project.’ In 2014 Rafalides also worked on a recording project titled ‘Peter Gunn – (The Music Of Henry Mancini)’ with the Harmony Ensemble of NY which featured artists including Lew Soloff, Lew Tabackin, Ronnie Cuber, and Victor Lewis.[

Rafalides has been a recurring guest faculty member at the ‘Zeltsman Marimba Festival,’ a summer percussion festival that takes place in different parts of the world each year. Rafalides also has a continuing Artist Residency at the ‘Music Village’ in Greece. He is also on faculty at Queens College teaching private lessons.