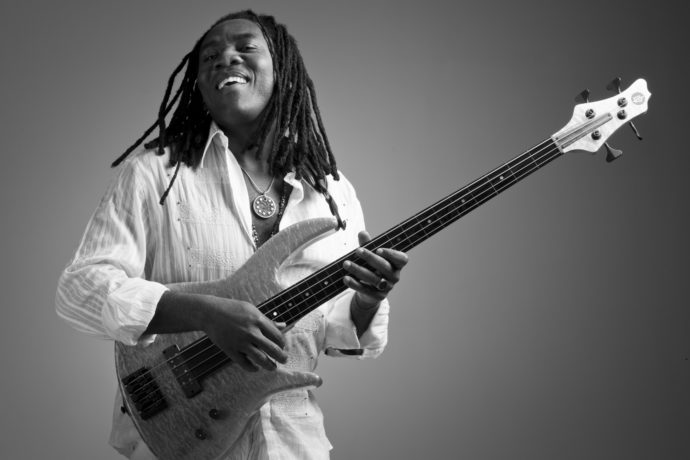 “Richard Bona is running his smile, his tranquility, and his musical elegance all over the world.” – L’EXPRESS

Fans call him “The African Sting,” critics call him a pro, but it’s his unique and electrifying style of connecting with his audience that titles him what he is—a true musician. Richard Bona’s seemingly effortless voice, fierce skills on the bass, unique songwriting/arranging expertise and ability to learn just about any instrument simply from watching, position him as a rare African artist to have established an unscalable reputation on an international platform.

Originally from Cameroon, Bona remains true to his roots, with African rhythms reflected in each of his seven albums; the first three, “Scenes from My Life,” “Reverence” and “Munia” display his unique approach to storytelling through sounds. Seeking inspiration from his origins, the themes of Bona’s albums address international issues which mirror his desire of using music to take a stance on issues affecting the oppressed. As an artist with a purpose, he expanded into new musical territories and teamed up with Congolese star, Lokua Kanza and Antillais singer/composer Gerald Toto to create the 2004 collective, “Toto, Bona, Lokua” on which Bona wrote four tracks.

The trio then hit the road and toured across France; however, Bono remained in Europe to tour with guitarist Mike Stern and guest star on Japanese guitarist Kazumi Watanabe’s album “Mo Bop 2.” Shortly after, the pair embarked upon a tour of Japan, providing Bona with the opportunity to incorporate the culture and sounds of a new territory into his work. Furthermore, he toured with Pat Metheny and appeared as a guest on two of Bobby McFerrin’s albums, along with numerous notable collaborations.

He later garnered recognition at the Victoires du Jazz Awards where he won the trophy for “Best International Artist of 2004;” such a prestigious award confirmed his ability to appeal to a multitude of audiences ranging from jazz, pop, bossa nova, traditional, afro-beat, and funk. In 2005, Bona guest appeared on Mario Canonge’s album “Rhyzome” and contributed to the soundtrack for Pascal Plisson’s film “Massai, Les Guerriers de la Pluie.” Also known for his role in the group, Steps Ahead, Bona has performed on many stages such as the Adelaide International Guitar Festival and with many luminaries such as John Legend for his album, “Tiki,” which was also nominated for a Grammy in 2007 for “Best Contemporary World Music Album.”

   Despite the fact that he spent the entirety of 2008 and 2009 on a non-stop tour, Bona released “The Ten Shades of Blues,” which illustrates his experience with different shades of the blues that he interacted with during his tours throughout locations such as the Sahel, Brazil, India, United States and Cameroon. Shortly after, Bona was honored by the Festival International de Jazz de Montreal with the Antonio Carlos Jobim Award; as one of seven recipients, he is distinguished as an artist in the field of world music whose influence on the evolution of jazz is widely recognized. He also received the prestigious SACEM Jazz Award (Grand Prix Jazz SACEM) in 2012 for the Jazz Grand Prize. Additionally, his certified Gold 2013 album, “Bonafied,” demonstrates a fusion of cultures in which he is continuously developing into a new album that will be toured internationally. With numerous awards, performances, and years of expertise, Bona has become one of the most accomplished and sought-after musicians of this generation. As he continues to redefine his sound, Richard has released his Afro-Cuban project Mandekan Cubano on June 2016 with his new album “Heritage.”