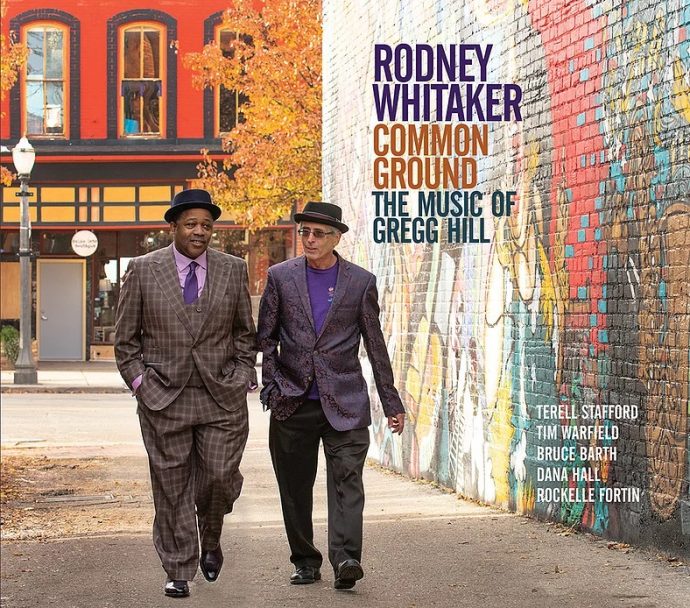 Bass player Rodney Whitaker moves in the highest circles of the jazz world. But when he meets a self-taught artist, his ears perk up. “They’ll say ‘you don’t want to listen to me, I’m not trained.’” Whitaker says. “But I do. People who have figured things out themselves really know something.” So when Whitaker met Gregg Hill, a self-taught jazz composer, he was ready to listen.

Whitaker has worked with the likes of Wynton Marsalis and Roy Hargrove. He teaches the next generation of rising stars as director of Michigan State University’s jazz studies program. Whitaker often crossed paths in the Lansing jazz community with Gregg Hill, who only began publishing his lifetime’s work in recent years. In time he discovered that despite their differences, they shared that essential trait: “We both know how to listen,” Whitaker reflects. “Our common ground is the music. It’s really the great neutralizer.” Their unlikely friendship led to Whitaker’s latest album Common Ground: The Music of Gregg Hill (Origin Records release: April 12, 2019)

“The important thing is that this project was born out of friendship and mutual respect,” Whitaker says, and he takes a respectful approach to arranging his friend’s tunes just as he does with well-known standards. “I change the groove, but the melody is the story,” Whitaker explains. “I am offended if a melody I composed is changed, hence, I wouldn’t do it to other composers.” He sees recording other composers’ work as part of an essential give and take: “The only way composers are fulfilled is if someone plays the work, so we do it for each other. I’ve known that from early on: Roy Hargrove’s Of Kindred Souls (1993) was one of the first recordings of my music.”

Common Ground is just one part of a larger project close to Whitaker’s heart. To celebrate his 50th birthday, he is releasing one album for each of his five decades. “So many musicians I admire died before this age,” Whitaker reflects. “I grew up in a community where people died very young, through illness or violence. Fifty is a milestone.” The five-album series gives free flow to musical ideas that have been bubbling up during the past five years but didn’t find an outlet while Whitaker worked with Mack Avenue Records. Look for Whitaker’s next project All Too Soon: The Music of Duke Ellington in the fall.

For Common Ground, Whitaker has assembled a line-up of acknowledged masters who are also his friends and frequent collaborators—“die-hard brothers,” as he calls them. Terell Stafford (trumpet & flugelhorn), Tim Warfield (saxophone), (Bruce Barth (piano) and Dana Hall (drums) are all close to the mid-century mark too, give or take a few years. That’s no coincidence. “When I play with young musicians in the classroom or the recording studio, they want me to be a mentor, a teacher.” Whitaker muses. “I wanted to be a peer for a while. People my age don’t need me to be in control all the time, even when I’m the bandleader. Sometimes you just want to be creative.”

The youngest member of the ensemble is an artist Whitaker has known for a lifetime: Vocalist and lyricist Rockelle Fortin is his eldest daughter. To create the lyrics for four tracks on Common Ground, Rockelle interviewed Gregg Hill to learn what inspired his work. “I knew she was good, but her lyrics for these tunes just knocked me out,” Whitaker smiles proudly. “She really captured Gregg’s stories.” On the track “Phoenix,” Rockelle’s rich voice carries Hill’s melancholy melody over a spare arrangement. Her lyrics describe the beauty that comes from ruins, the mythical bird rising from the ashes after flames, and each word is both evocative and shaped perfectly, like a pearl bead strung on the tune.

For Gregg Hill, jazz composition was a creative outlet apart from his working life, one that helped him express his own stories of joy and loss. After retirement, he began collecting over thirty years’ worth of work into a series of books, with performances and recordings to follow. When Whitaker first played some of Hill’s tunes, he was delighted by Hill’s versatile voice, evoking Thelonious Monk in one, then soul jazz in the next. That flexibility matches Whitaker’s own musical philosophy. “I come out of all traditions. I believe that jazz genres are colors you can draw on to express something emotionally,” he remarks. “My musical expression sometimes sounds like contemporary jazz or avant-garde. I’m not a chameleon, it’s all in me.”

Whitaker has spent years doing his life’s work in Lansing and raising his creative family—all his seven children are musicians or artists. “But Detroit is where my heart is,” he says “That’s where most of my creativity happens.” And it’s where his musical family tree is rooted: Whitaker names among his musical parents Detroit pianist and singer Alma Smith, Etta James’ pianist Kenny Cox, Oberlin and U of M prof Donald Walden, and trumpeter Marcus Belgrave. Whitaker carries the tradition forward, mentoring Belgraves’s son Kasan.

Time in the Lincoln Center Jazz Orchestra with Wynton Marsalis completed his education, and set him on a path to perform, teach, and record with the world’s leading artists—and with kindred spirits closer to home like Gregg Hill. “Gregg just wants to tell his story, and that’s what all humans want. Some of us are lucky enough to have music. That just increases who we can reach with our stories.“