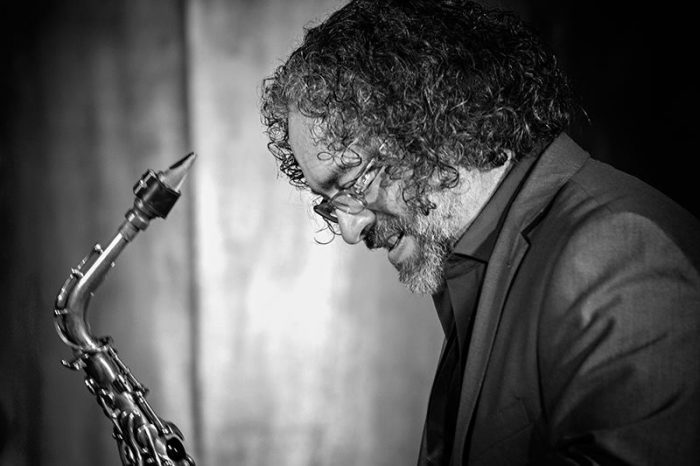 He was born in San Juan in 1968. At eight, he attended Puerto Rico’s Escuela Libre de Musica where he studied the saxophone, bassoon, clarinet, and flute. “I was in the eighth grade when I played with a group of students older than me,” says Rios. “Two of the group members listened to jazz, and they introduced me to stuff like Dexter Gordon, Sonny Rollins, and (Charlie) Parker. When I first listened to Parker, I said, ‘What is this?’ It was like someone took me to another planet or galaxy. So I started buying and collecting jazz records. That was back in 1981-82.” Rios also cites John Coltrane, Sonny Rollins, and Ornette Coleman as primary influences.

Later, Rios played with the vocalist Joe Valle. Also, he credits trumpeter, Elias Lopes, for teaching him how to play correctly. In 1984-85 he performed with the orchestras of Bobby Valentin and Cano Estremera. After a brief stint in Las Vegas, where he performed at the Latin Quarter, Rios returned to Puerto Rico and accompanied Sophy, Lucecita, Glenn Monroig, Paloma SanBasilio, Rocio Durcal, Roberto Carlos, Jose Jose, and Marco Antonio Muniz. Also, he did commercial work and jingles.

In 1986 he enrolled in Berklee’s College of Music in Boston, where he studied with Bill Pierce and Andy McGee and attended Master Classes with Michael Brecker. Also, he excelled on the alto, tenor, soprano, and baritone saxophones, flute, clarinet, and as a composer-arranger.

In the 90s, he and Pablito Rosario formed the group Orinoco, which made its debut at the 2009 San Juan Jazz Fest. Also, he appeared as a guest with the dynamic all-star salsa group, Descarga Boricua.

On his first recording as a leader titled, The Time 6:38 Rios composes, arranges, produces, directs, and plays a multitude of instruments. The guests include saxophonist David Sanchez and the late great trumpeter, percussionist Jerry Gonzalez and others.

In 2015 Rios released Standard Bomba, followed by Standard Bomba II (2018), where he ably and remarkably fuses straight-ahead jazz classics and original compositions with traditional Puerto Rican bomba. Also, in 2017 he composed the soundtrack for the acclaimed documentary film Nuyorican Basquet.

His credentials as a clarinetist with Puerto Rico’s Symphony Orchestra and performances of the works of Mahler, Bartok, and Ravel among others, are lesser-known but significant.

To date, Rios appears on over 300 recordings. Also, he is directly responsible for whetting the Puerto Rican public’s appetite for jazz and making it accessible to the masses. His impressive credentials and diverse body-of-work have earned Furito Rios the title, Maestro!