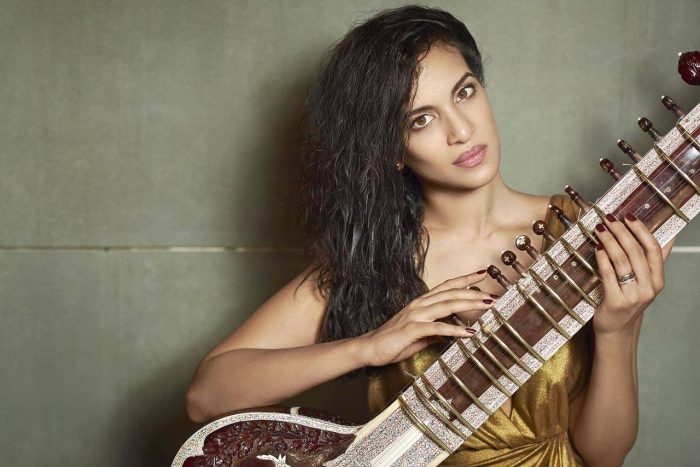 Sitarist, composer, producer: Anoushka Shankar is a singular, genre-defying figure within the classical and contemporary, acoustic, and electronic world music scenes. Her dynamic and spiritual musicality has garnered several prestigious accolades, including six Grammy® Award nominations, recognition as the youngest and first female recipient of a British House of Commons Shield, credit as an Asian Hero by TIME Magazine, two Eastern Eye Awards for Music, and a Songlines Best Artist Award. Anoushka has the notable honor of becoming the first Indian musician to perform live at the Grammy® Awards.

During her twenty-five years as a live, touring sitarist, Anouska has come to be known for her deeply emotional and fiery playing style, surprising and inventive instrumentation, and intense rhythmic interplay. Whether it’s Carnegie Hall in New York or the psytrance festival Boom in Portugal, the Sydney Opera House or Glastonbury, Anoushka is equally at ease presenting classical Indian ragas with tabla accompaniment, soloing with world-renowned orchestras like the Berlin, London or New York Philharmonic, or live-looping with her pedal-board over a screeching bass, sharing her passion for the spirituality and depth of the sitar whilst breaking it out of the constraints of cultural expectations.

Anoushka studied the sitar and Indian Classical music from the age of nine exclusively under her father and guru, the late, legendary Ravi Shankar, and made her professional debut at the age of 13. By twenty, she had toured the world extensively and made three classical solo recordings for EMI/Angel Records: Anoushka, Anourag, and Live at Carnegie Hall. With the latter, she became the first Indian woman to be nominated for a Grammy® award, and the youngest-ever nominee in the World Music category.

Having worked full-time as a musician throughout her teenage years, in her early twenties Anoushka took a break from making albums and looked towards other creative outlets. She authored a biography on her father, Bapi: The Love of My Life, and became a regular columnist for New Delhi’s First City magazine and India’s national newspaper The Hindustan Times. She experimented with film by acting in Pamela Rooks’ Dance Like a Man, for which she trained as a Bharatanatyam dancer and was nominated for India’s prestigious National Award for Best Debut. However, her explorations in writing, dancing, and acting only served to confirm that her first love was music.

Feeling a deep desire to create music that more closely represented her multicultural life and identity, in 2005 Anoushka released her self-produced, self-composed breakthrough Rise, which found her stepping into a new cross-cultural sound-world and earned her a second Grammy® nomination. In 2007 she spread her wings further and released the experimental, conceptual album Breathing Under Water in collaboration with producer/multi-instrumentalist Karsh Kale. In this period she also began a fulfilling journey as a guest artist, demonstrating the versatility of the sitar by collaborating with varied artists starting with Sting, Herbie Hancock and Thievery Corporation, moving through Lenny Kravitz, Joshua Bell, MIDIval Punditz and Rodrigo y Gabriela, and most recently Gold Panda, Deva Premal, and Milos Karadaglic.

In 2011 she signed to the prestigious Deutsche Grammophon label and enjoyed a fertile creative period, releasing four more solo albums, each of which received Grammy® Award nominations: Traveller (produced by Javier Limon) examined the relationship between Indian Classical music and Spanish flamenco, and featured legends Pepe Habichuela, Shubha Mudgal and Duquende; Traces of You (produced by Nitin Sawhney) found Anoushka collaborating with her half-sister Norah Jones on deep meditations of love and loss; Home was an offering of Indian Classical ragas recorded as a tribute to her late father; and Land of Gold was written in response to the global humanitarian refugee crisis, and featured guest artists M.I.A, Vanessa Redgrave and Alev Lenz. Finally, in 2019 she released the fifth album under Deutsche Grammophon: Reflections, a compilation album mapping highlights from her 20-year recording career.

Anoushka’s artistic output increasingly reflects her impassioned support of women’s rights and social justice. In response to the horrific gang-rape of Jyoti Singh Pandey in Delhi in 2011, Shankar threw her weight behind the campaign One Billion Rising on Change.org. When touring her album Land of Gold she used the opportunity to speak about the refugee crisis and raise funds for the charity Help Refugees. Other recent projects include hosting a radio show about gender equality to promote the United Nations Sustainable Development Goals and coordinating a call-to-action to the UK government in response to the European refugee crisis. She narrated Stolen Innocence, a documentary film about human trafficking, which released in Autumn 2017.

Anoushka was made Associate Artist of London’s iconic South Bank Centre from 2019, where she will perform a series of concerts across the center’s multiple venues in the coming seasons. Current and future projects include a live duo with electronic musician Gold Panda, orchestral performances of her compositions (arranged by Jules Buckley), live performance/screenings of her new film score to 1928 silent film “Shiraz,” and special gala performances in 2020 commemorating the centenary of her father Ravi Shankar’s birth.