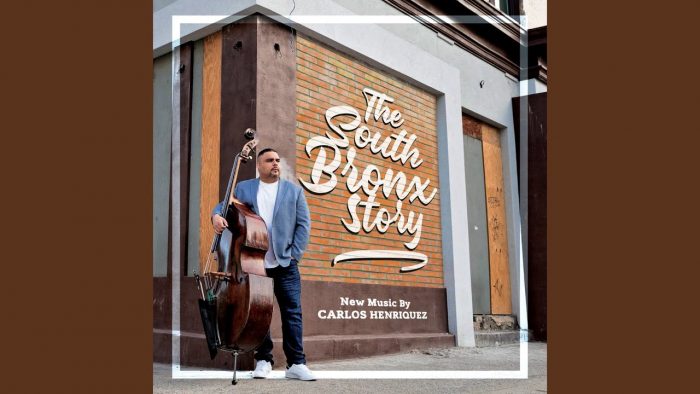 Tiger Turn is delighted to announce the release of The South Bronx Story, a bold multi-movement work by celebrated bassist and composer Carlos Henriquez. Due out on August 27, 2021, this career-defining release is a retrospective of the social history of the South Bronx and draws from Henriquez’s personal Puerto Rican heritage. For the occasion, Henriquez has enlisted an elite ensemble of musicians for the date in trombonist Marshall Gilkes, saxophonist Melissa Aldana, pianist Robert Rodriguez, drummer Obed Calvaire, trumpeters Michael Rodriguez and Terrell Stafford, and percussionist Anthony Almonte as well as the multifaceted Jeremy Bosch on flutes and vocals.

Carlos Henquriez is one of the preeminent bassists of his generation. A member of the Jazz at Lincoln Center Orchestra for over two decades, Henriquez is one of the first truly bilingual musicians, in that he is a master of both jazz and Afro-Latin traditions. His upbringing in the South Bronx, a rich musical hub that boasts local legends such as Tito Puente, Eddie Palmieri, Celia Cruz, played a major role in the virtuoso’s musical and personal development. On The South Bronx Story, which is Henriquez’s third release as a leader and a follow-up to his 2018 tribute to Dizzy Gillespie, Dizzy Con Clave, the bassist, and composer takes listeners on a wide-ranging musical journey through his stomping grounds. This project first premiered in 2018 at Jazz at Lincoln Center to wide acclaim.

“[On The South Bronx Story], I am using my music, experience, and heritage as a Puerto Rican growing up in the Bronx to tell a story that looks back and forward,” says Henriquez. “Jazz is American, born out of the melting pot of our Afro-American experience. And in the American spirit, jazz has adapted to different cultures, cities, people, and places and become an expression of one’s identity. This project represents just that–the tragedy, violence, and history aren’t over, but there is hope in the future. Music, dance, and the arts can bring that all together and transcend to showcase common humanity.”

On The South Bronx Story, Henriquez takes inspiration from personal experience and history. Movements like Soy Humano (I Am Human) speak to Henriquez and his family’s obstacles in dealing with the housing system and financial turmoils growing up. Guajeo De Papi is a testament to fatherhood in honor of his father, Jorge Henriquez, who provided for his family even during tough times. “My dad is loved by many and a pure example of how a man can be defined. I am so proud of him and truly honored to have written this tune for him,” Henriquez shares. Another standout, the salsa-tinged Hydrants Love All, was written with Henriquez’s brother in mind, and the summer days they shared playing amongst the fire hydrants on the hot Bronx streets.

Other tracks ingeniously reference significant people and events that created the diverse culture of New York’s South Bronx. Movements include Black Benji, a piece inspired by Cornell Benjamin, who is credited for promoting peace among the gangs in the Bronx; Mama Lorraine about the life and work of activist Lorraine Montenegro who, along with Evelin Lopez Antonetty, founded the United Bronx Parents but tragically died in Puerto Rico in the aftermath of Hurricane Maria; Borough of Fire for the devastating burnings of low-income buildings during the 1970s; and Moses and the Cross about the divisive legacy of Robert Moses and the construction of the Cross Bronx Expressway.

The album features many moments of inspired soloing. On Black Benji, Melissa Aldana gets plenty of room to stretch, showing absolute command of the horn. Marshall Gilkes and Terrell Stafford trade colorful phrases over the form in Guajeo de Papi, while Michael Rodriguez spins many beautiful lines with a gorgeous Flugelhorn tone on Mama Lorraine. Throughout, the versatile Jeremy Bosch (widely known as one of the lead singers in the GRAMMY-winning ensemble Spanish Harlem Orchestra) pivots between burning on the flute and singing, particularly his soneo on the mambo section of Moses on the Cross recalls the great singers of the Fania era.

This seamless blend of lineages into a cohesive whole underscores the massive impact of the Puerto Rican diaspora in the music and culture of the borough, reminding listeners that Latino culture cannot possibly be separated from New York culture and Bronx culture cannot be separated from Jazz. “Being a born breaded Bronxnite, I have seen first hand the values and instincts which allowed me to understand the family of my community. Integration, which was the key growing up for me, was a cultural aspect that made me appreciate those I grew up playing with. As we listen to the different songs on this project, you will see how influential the streets have proven to be for me.”

Carlos Henriquez was born in 1979 in the Bronx, New York. He studied music at a young age, played guitar through junior high school, and took up the bass while enrolled in The Juilliard School’s Music Advancement Program. He entered LaGuardia High School of Music & Arts and Performing Arts and was involved with the LaGuardia Concert Jazz Ensemble, winning first place in Jazz at Lincoln Center’s Essentially Ellington High School Jazz Band Competition and Festival in 1996. In 1998, swiftly after high school, Henriquez joined the Wynton Marsalis Septet and the Jazz at Lincoln Center Orchestra, touring the world and featuring more than 25 albums. Henriquez has performed with artists including Chucho Valdes, Paco De Lucia, Tito Puente, Eddie Palmieri, Danilo Perez, Gonzalo Rubalcaba, the Marsalis Family, Willie Nelson, Bob Dylan, Stevie Wonder, Lenny Kravitz, Marc Anthony, and many others. He has been a member of the music faculty at Northwestern University School of Music since 2008 and was music director of the Jazz at Lincoln Center Orchestra’s cultural exchange with the Cuban Institute of Music with Chucho Valdes in 2010.<iframe