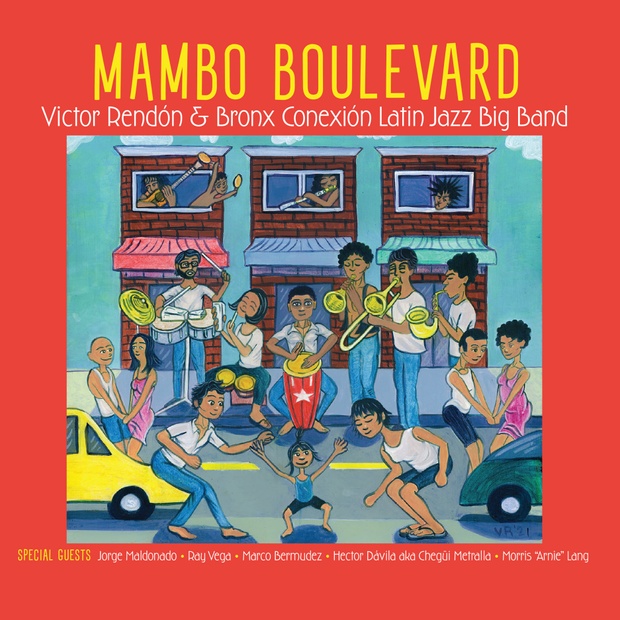 The ensemble’s ongoing “mission” is to keep the big band tradition alive and create a diverse, exciting repertoire that appeals to a broad audience. Mambo Boulevard does not disappoint!

Victor Rendón’s El Chocante, Chale, and Nueces River reflect his passion for straight-ahead mambo with elements of Latin jazz. Biwa Lake is a lush, old-school bolero. Rick Faulkner’s Leeway (a play on words) tips its hat to the renowned jazz trumpeter, composer Lee Morgan and his signature Blue Note Sound. Dancers will revel in the ensemble’s versions of Arsenio Rodriguez’s Mami me gustó and Orquesta Aragon’s Aprende muchacho, soulfully sung by lead vocalist Jorge Maldonado and backup singers Marco Bermudez (a leader in his own right) and Hector Dávila. The album closes with the descarga Aguacero, an improvised jam session that is bound to move even the most casual listeners.

Initially, The Bronx Conexión Latin Jazz Big Band modeled itself after the orchestras of Tito Puente, Frank “Machito” Grillo, and Mario Bauza. According to Rendón, “it began mainly as a rehearsal band playing stock charts.” Later, Rick Faulkner and Joe Mannozzi brought in new compositions, arrangements, and remakes, and the rest is history. Another significant factor is an extensive residency at lower Manhattan’s renowned Nuyorican Poets Cafe, which gives the ensemble the freedom to experiment with new material and perform in front of a live audience. The experience was crucial to expanding the ensemble’s repertoire and the development of its trademark sound.  On a more sweeping scale, Mambo Boulevard is a testament to Rendón’s leadership and the ensemble’s commitment to excellence. In brief, Mambo Boulevard is the next best thing to experiencing the band in a live setting.

As an author/transcriber, his work has appeared in Modern Drummer, Percussive Notes, LP Newsletter, Music in Motion Films, DCI Music Video, Drum! Magazine, and Warner Bros. Publications. He is the author of The Art of Playing Timbales distributed by Alfred Publishing. For several years Victor also published his own semi-annual magazine, Latin Percussionist. Rendón, who holds a Bachelor of Music from the University of North Texas and a Masters degree in education from Hunter College, in the New York City Public Schools. A successful clinician, he conducts workshops in Latin percussion styles. Mr. Rendón is an LP, Sabian, Vic Firth, and Evans performing artist and educator.

MAMBO BOULEVARD WILL BE AVAILABLE ON ALL PLATFORMS APRIL 16, 2021. HARD COPIES: https://cdbaby.com/ AND https://bronxconexion.com.