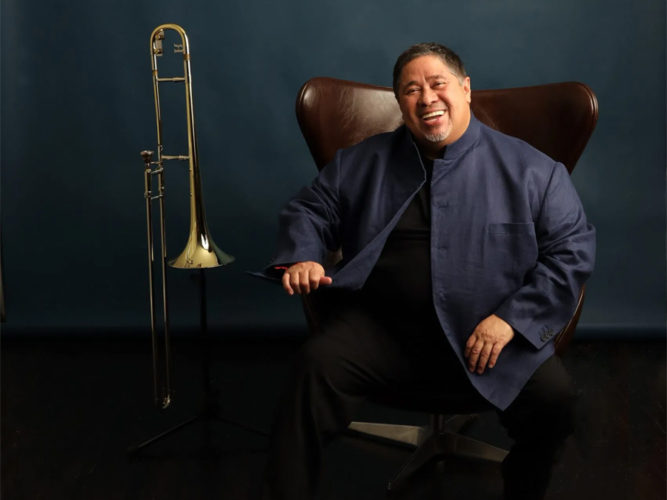 “ADMIRAL” PAPO VAZQUEZ and his MIGHTY PIRATES TROUBADOURS will perform two sets at CHELSEA TABLE AND STAGE on WEDNESDAY DECEMBER 1, 2021 @ 7 PM and 9:30 PM.

Known for an iconic career that spans 40 years, GRAMMY-nominated Latin music luminary Papo Vázquez is one of the leading voices of the contemporary Latin jazz scene. Vázquez was described by The New York Times as “brash and precise… helping to drive the music, giving it snap and ferocity.” His deep knowledge of the indigenous music of the Caribbean peoples, intertwined with his decades-long dedication to jazz (sparked by a love for John Coltrane and J. J. Johnson) affords him to be an expert in fusing these two idioms.

Vázquez’s reputation as a jazz musician grew, as he became a leading player in New York’s burgeoning Latin jazz scene of the late 1970s. He was a founding member of Jerry Gonzalez’s Fort Apache Band and Conjunto Libre, as well as Puerto Rico’s popular Latin fusion band Batacumbele. With Batacumbele he performed, composed, arranged, and recorded on several albums from 1981 to 1985. During this time, Vázquez first began experimenting with “bomba jazz”; a fusion of jazz and traditional Puerto Rican bomba rhythms. Upon his return to New York, he joined Tito Puente‘s Latin Jazz Ensemble, traveling with them as a principal trombonist, and toured Europe with Dizzy Gillespie‘s United Nations Orchestra.

For the next two decades, Vázquez appeared on countless albums as a recording artist. Among the dozens are Wayne Shorter’s Alegria; Ruben Blades’ Amor y Control, Antecedente, and Caminando; Dave Valentin’s Tropic Heat; Bebo Valdez’s Bebo de Cuba; Arturo O’Farrill’s Bloodlines; and many, many others. In 1993, Vázquez released his debut as a leader, Breakout, and in 1999 and 2000, he released At the Point, Vol. 1 and subsequently Vol. 2., with the group that would eventually become known as the Mighty Pirates Troubadours. In 2008, he released Marooned/Aislado with the expanded Pirates Troubadours (a 19-piece Afro-Puerto Rican Jazz Orchestra) which went on to receive a GRAMMY nomination for Best Latin Jazz Album.