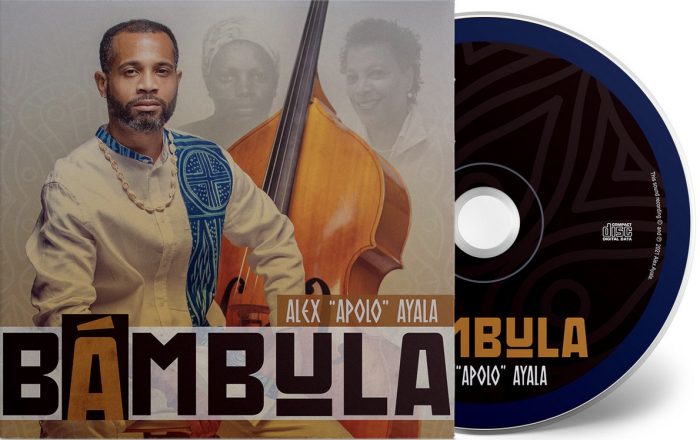 Alex “Apolo” Ayala pays tribute to his ancestors with Bámbula, his debut as a bandleader, due out February 11, 2022, via Truth Revolution Records.

Bámbula is a remarkable celebration of Ayala’s Afro-Puerto Rican culture, a rumination on identity, and a stirring tribute to his late mother and grandmother. Over the course of seven original compositions and one reimagination, the San Juan-native artfully blends Afro-Caribbean styles with the jazz language, making an impactful musical statement.

With Bámbula, Ayala comes into his own as a leader. The album was heavily inspired by the social unrest that unfolded in the summer of 2020 and the killing of George Floyd. “I found myself reflecting about both my race and my ethnicity. A word that kept resonating in my mind was ‘identity.’ Specifically, Afro-Puerto Rican identity”,” Ayala shares. He also thought about his ancestors. With these sentiments in mind, Ayala began to construct his debut album.

The title Bámbula means “the memory of a forgotten place.” Ayala shares that the Kikongo (Bantu language) word is “the act of re-remembering who you are as a person, tapping into the collective unconscious. The Bámbula is the oldest known rhythm of the Bomba complex.” “Bomba is the music that our African ancestors brought with them to the Americas. It is the most authentic expression of Puerto Rican Blackness,” he reflects. Each song on Ayala’s debut has a purpose, and each is an homage and tribute to these ancestors, specifically, his late mother and grandmother.

For the occasion, the bandleader turned to the rich Puerto Rican diaspora in New York City, employing an impressive crew of talented musicians. Consummate improviser and instrumentalist Ivan Renta displays an arresting lyricism and rhythmic control as the main melodic voice, supported by the vigorous drums and percussion of Fernando García and Nelson Mateo Gonzalez.

“Renta on saxophone was my first option from day one,” Ayala says while discussing his band. “He is a multilingual player equally at home in jazz and Afro-Puerto Rican languages. Garcia is a master in applying the languages of Bomba and the barril de bomba vocabulary into the drum set and Nelson Mateo Gonzalez is to me, the premier Afro-Puerto Rican drummer. His vast knowledge of the language of Bomba and the bomba drum is amazing to behold.”

The bright “Café y Bomba” features the sultry voice of Anna Louise Andersson singing both lyrics and melodic parts that blend beautifully with the ensemble. “Anna Louise is like a breath of fresh air. Her voice is clean, her intonation is remarkable, and her vocal range and skill are incredible,” Ayala adds.

As a composer, Ayala finds compelling ways of orchestrating, resulting in the small ensemble truly maximizing the potential of their instruments. On “Bozales,” one can hear Renta doubling bass lines with the bandleader and playing rhythmic background parts while García and Gonzalez play intricate drum breaks in perfect unison. This is just one example where the sound is greater than the sum of its parts. Another highlight is “Jíbaro Negro” which features an outstanding solo by Ayala and displays the excellent synchronicity between García and Gonzalez. The record ends with an enigmatic arrangement of the “Tite” Curet Alonso Catalino’s classic “Las Caras Lindas,” a profound song about the beauty of Afro-Caribbean heritage. The group’s rendition offers a more subdued approach, making it a masterstroke as the album’s closer.

Alex “Apolo” Ayala’s Bámbula Project will celebrate the release of Bámbula at DROM on January 28, 2022, at 9 PM. Purchase Tickets HERE.