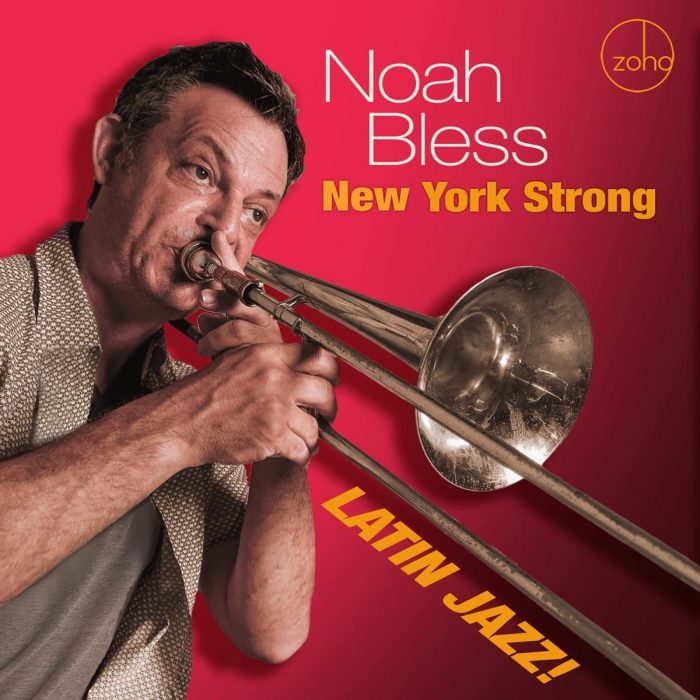 NOAH BLESS is NEW YORK STRONG. I’ve seen him on the finest bandstands representing this great city, in a manner that honors that NYC tradition of purposefulness. He is equally at home in swing, rumba, or samba, but always strong. He’s brought together a band of New York Strong. Amongst them the great bassist Boris Kozlov, Flautist Alejandro Aviles, and percussion Maestro Luisito Quintero. If Strong is Yin, then Yang is gentle. This lovely recording, made by lovely musicians, in a scary time in history will give the listener strength and respite. – Arturo O’Farrill

A 30-year veteran of New York’s rich Latin jazz scene, trombonist-composer Noah Bless has immersed himself in Afro-Cuban music, soaking up mambo and rhumba while getting the clave ingrained into his DNA. A graduate of internationally renowned Cincinnati Conservatory, with a master’s degree in jazz from the Manhattan School of Music, Bless didn’t intend on pursuing the Latin jazz path when he arrived in the Big Apple in 1990. Indeed, the Thad Jones-Mel Lewis Orchestra was more in his personal wheelhouse. But as all working musicians know, especially those fresh arrivals to the city looking for a means to pay their rent, you go where the gigs are. “There were a ton of clubs in New York at that time, and if you were a brass player and you could read music, you could do Latin gigs.”

Bless found himself playing for dancers at the fabled Club Broadway on 96th & Broadway. “At that time, I was living on the Upper West Side on 114th Street and I used to walk down to that gig,” he recalled. He persisted on the salsa scene and by 1992 was touring the world with Afro-Cuban jazz pioneer Mario Bauza, ultimately appearing on the maestro’s 1993 release, My Time Is Now. He subsequently put in time with salsa stars Celia Cruz, Oscar D’Leon and La India, Latin jazz innovator Eddie Palmieri, arranger-conductor Ray Santos, the Spanish Harlem Orchestra, and Arturo O’Farrill’s Afro Latin Jazz Orchestra.

Fast-forward to 2020 and Bless is now confident in saying, “I consider myself a salsa trombone player after all these years.” And as such, he is part of a potent lineage that goes from Willie Colón to Barry Rogers (with Eddie Palmieri’s La Perfecta), Conrad Herwig (with Palmieri’s La Perfecta II), Luis Bonilla, Jimmy Bosch, and his contemporary Chris Washburne.

“This was something I was planning to do in my 30s or 40s,” he said of New York Strong – Latin Jazz, “but I honestly think that it probably couldn’t have been made until now.” Perhaps it took this long to acquire the seasoning and lyricism that Bless demonstrates on his melodic opener, Chasing Normal, or his relaxed, soulful readings of the beautiful Jobim ballad Ligia, Baden Powell’s beguiling Afro-samba number Canto de Ossanha or James Taylor’s mellow folk-rock anthem, Fire And Rain. Or maybe Bless was waiting all this time to truly master the intricacies of churning polyrhythms and mesmerizing montunos at the heart of Afro-Cuban jazz. Whatever the case, he has emerged with the rhythmic assuredness, affinity for descargas, and considerable chops to speak as authoritatively as he does on his instrument throughout New York Strong.

“That melodic thing has always been my strong suit,” said the trombonist. “And, of course, it’s great for ballad playing in more of a straight-ahead swing tradition. But I found that it also applies well to playing in Latin bands, particularly on montunos, where you’re supposed to play something that’s very melodic in the clave. So that idea — how to feel that rhythm while playing simply but still melodically — has been marinating for years. It’s something I’ve been working on for decades at this point.”

Bless pointed to his interpretation of Taylor’s Fire and Rain as a deceptively difficult track on New York Strong. “In some ways it was the simplest tune, being a pop tune, but in this case, it gets the most complex arrangement on the album. Because if you really ‘check under the hood’ on this piece you’ll hear that it’s a ‘nested polyrhythm,’ where it gives the sonic illusion of being a 6/8 Venezuelan joropo rhythm and a 4/4 melody at the same time. So if you happen to focus on the rhythm section, it may throw your ear off. But that 4/4 melody is so strong that you just kind of settle into it.” He mentioned that his inspiration for this piece was a Michael Brecker composition, Escher Sketch (A Tale of Two Rhythms),” from the 1990s Now You See It…(Now You Don’t), where two different but coinciding rhythms interact and intersect.

Regarding Baden Powell’s Canto de Ossanha, Bless explained, “I learned this tune playing with Susan Pereira and Sabor Brasil. And before recording it, I checked out every version of it I could and basically took what I liked from probably a half dozen different recordings.” The fade at the end of the tune, he added, was done to create a kind of Carnival effect. “It’s like a street parade where the musicians are literally marching away from you.”

Elsewhere on New York Strong, Bless and his talented crew — bassist Boris Kozlov, pianist Mike Eckroth, Venezuelan percussionist Luisito Quintero and Venezuelan drummer Pablo Bencid — deliver spirited interpretations of Ray Santos’ Sunny Ray and Rudy Calzado’s Ganga, while putting their own stamp on these Afro-Cuban jazz classics. “Those two tunes I probably have the longest relationship with, and I wanted to record them for years,” said Bless. “Of course, Ray Santos did not do Sunny Ray in 7/4 as we do. And Ganga, which is originally a vocal tune for an incantation in the Palo religion, is an Afro-Cuban one-chord vamp that we played in Mario Bauza’s band. And I would live for the opportunity on gigs to blow on that tune, but it wouldn’t come very often. So on this version, I felt like I could really go ahead and express myself. And when you bring that jazz background with knowledge of the clave, you can go deep.” Kozlov’s tumbao groove carries “Ganga” while conguero Quintero and drummer Bencid fuel this lively descarga that builds to exhilarating heights on Eckroth’s mesmerizing montuno.

Bless turns Bill Mobley’s 49th Street, an intricate number with a Lennie Tristano-like line, into a percolating Afro-Cuban burner. “Bill is a great, underrated hard bop trumpet player and composer who had a wonderful big band that I used to play in at Smoke,” he explained. “And ‘49th Street’ is a devilishly difficult number, so I needed to find a way to open it up a little bit because it was almost unplayable by a single voice, let alone a trombone. There’s hardly any break in the line; it’s a constant stream of very angular eighth notes. So technically, it’s almost beyond the capability of a trombone to play it.” His answer was to re-imagine the tune as a rhumba. “I wasn’t sure how Boris would come up with a rhumba bass line over what is essentially an atonal kind of angular thing, but he nailed it.” Special guest Alejandro Aviles makes an appearance here and also on Noah’s rhythmically-charged “The Key”, which nimbly shifts back and forth from a breezily swinging 4/4 melody to a churning funky Afro-Cuban songo beat. The trombonist is particularly melodic form here while Kozlov turns in an outstanding bass solo and Quintero is turned loose at the tag.

The collection closes on a scintillating note with Santos’ Sunny Ray. “I wanted to preserve the mambo big band feel on it and represent all of the hip section from the original,” said Bless, “but I always wanted to update it a little. And playing it in 7/4 just felt really natural.”

On the band’s remarkable versatility heard throughout New York Strong, Bless said, “We’re dealing on a high level in all the different styles. And when you have guys like Mike, Boris, Luisito, and Mike and Pablo, you can do that.” Together they bring a fresh twist to the tradition on the trombonist’s long-overdue debut as a leader.