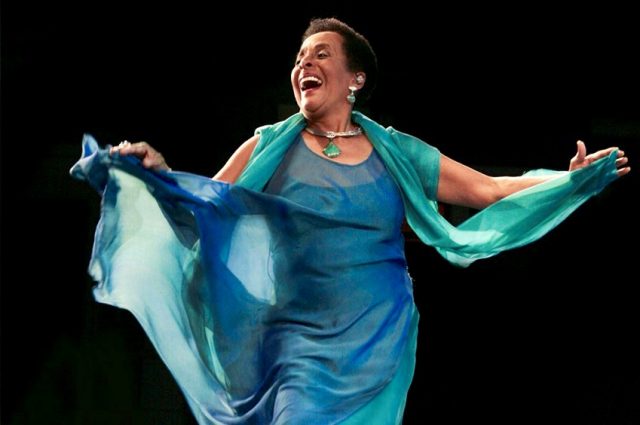 “Our greatest challenge is to find the one true rhythm of freedom—something like the wind that allows a bird to fly, or a new language more powerful than speech, which holds you.” Susana Baca

The Afro-Peruvian singer-songwriter Susana Baca made a rare appearance PIONEER WORKS, sprawling art and exhibition space in the heart of Red Hook, Brooklyn.

The songstress has come a long way since her interpretation of “Maria Lando” appeared on David Byrne’s Luaka Bop compilation, THE SOUL OF BLACK PERU (1995), which launched her career and sparked a revival of Afro-Peruvian music.

Dressed in a stunning, royal blue outfit and backed by a spectacular 4-piece group that included a guitar, violin, bass, and Afro-Peruvian percussion, she was the spitting image of the Yoruban deity, Yemaya, Goddess of the sea and mother of all. The repertoire consisted of poetic songs (with lyrics by some of Latin America’s premier poets) and traditional and modern songs whose themes revolve around work, love, struggle, sorrow, and Black pride.

Susana Baca’s shows have as much to do with basking in her presence as they do with the music. She is a Diva and a consummate show-woman who knows how to work a crowd, get her message out and present centuries of passionate tradition.

Nothing tops seeing Baca in a small, intimate setting but watching her convert a large, noisy crowd – many apparently first-time listeners, and turn them into “believers” is a sight to behold.

What’s next for Peru’s former Minister of Culture? Given her amazing trajectory, anything is possible. Whatever the future holds, let’s hope it won’t be long before she returns to New York and graces us with her light and presence.

Thank you, WORLD MUSIC INSTITUTE and PIONEER WORKS for making the event possible.