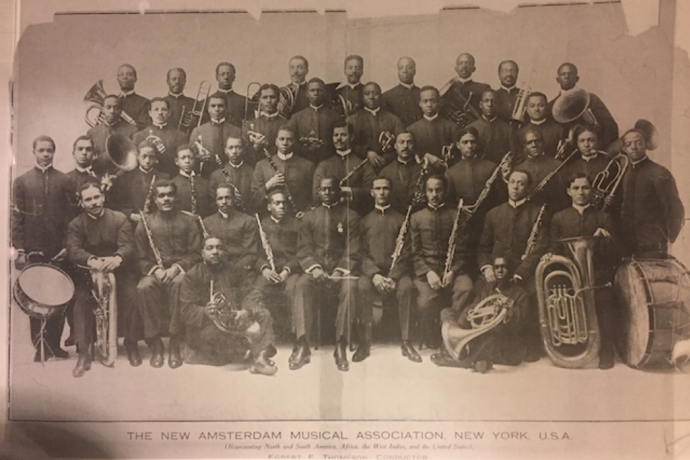 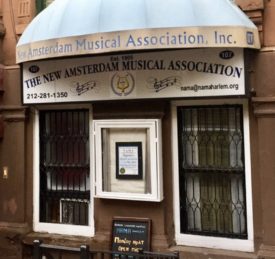 NAMA MISSION STATEMENT: “To voluntarily promote and encourage the study and production of instrumental music in all the various branches; to draw together trained musicians in the State of New York, in a musical association for mutual intercourse and encouragement and to establish in the City of New York, a central meeting place for the instruction and for social intercourse between its members”.

In 1904, African American musicians were barred from joining the American Federation of Musician Local 310 (now Local 802), so they started their own union, and New Amsterdam Musical Association was born. The association was conceptualized by James Reese Europe and became a cultural reference point for jazz from the 1920s to the 1950s.

In () NAMA purchased the brownstone, which once served as a rehearsal space and boarding house for musicians such as Jelly Roll Morton, John Coltrane, and Max Roach among others.

These days the marquee at NAMA is only lit on Monday nights for an open mic session or a spoken word performance, but President Willodene Robins is determined to keep it going. “This place belongs to us. This is a historic place in Harlem U.S.A. My vision is for a new NAMA to rise higher and higher.”

At a recent induction ceremony, plans were announced to bring NAMA back to its former glory and to take its rightful place in the history of New York City.

Currently, the organization is launching a membership and raising funds to fix the ceiling in the performance space, hire a decorator, and apply for state and federal landmark status. Also, it intends to turn the basement, which once served as a speakeasy during Prohibition to be converted into a recording studio.

Currently, NAMA offers lessons to vocalists and instrumentalists at low to no cost. It also holds a host of community events such as jam sessions and barbecues that both serve as gathering times for the Harlem community and fundraising events.

There is speculation that James Reese Europe learned about highly skilled Puerto Rican musicians and recruits for the 369th Infantry (aka Harlem Hellfighters during WWI) through bass and tuba player, Rafael Escudero, a member of Europe’s Clef Club Orchestra and NAMA.

The NAMA Teaching and Learning Program is a comprehensive musical training program that prepares both children and adults to interpret and perform various styles of music. Participants may choose from a wide range of instruments, including voice, piano, bass, guitar, trumpet, and violin. Supporters are encouraged to participate in our “Sponsor a Child” Fund, donate, musical instruments or volunteer to give free or low-cost lessons to our roster of current and prospective students. Our primary piano teachers: Mr. Charles Lovell and Yovanne Pierre (Adults) and Ms. Dolly Allen (Children).

JazzArt is a program developed by Board Chairman, Willie J. Mack, formerly MusArt. JazzArt focuses on the strong connection between art and music. Visual artists are invited to display their talents during individual showcases or on the easel placed on stage!! Dancer, Loretta Abbot is often featured, and JazzArt also supports rappers, poets, and spoken word artists. Our poet laureate, Dr. Ruby Reeves often graces the crowd with her thoughtful and reflective writings. The ensemble provides the musical ambiance.

Stylings of a Songstress created by President Antoinette Adams-Hamlin showcases three NAMA female vocalists. This allows them to perform music in their repertoire that highlights their genre of expertise. Backed by the house band, it is an excellent addition to our performance roster, and can usually be seen on the first Friday of each month!

The Friday Night Jazz Jam Session is our newly created program developed by Board member Roberson (Robey) Norton. Unlike the Monday Night Jam Session, this session every other week concentrates on the music of jazz with an added bonus of inviting vocalist to the stage. Joining Roby, who plays saxophone are: Charles Lovell on Piano, Sam Greshen on Drums, and Michael Young on Trumpet.

Children’s Activities include Columbus Day and Halloween Open House, where any child can receive a free music lesson and light refreshments.
The Akua Weeks Scholarship Program provides free music lessons for youth living in the community. Students are given instructions in musical technique, composition, and literacy by our master musicians. The program was named after one of our long-time members Ms. Akua Weekes, who passed away July 3, 2015.

Administration, Membership, and Development
The administrative and financial abilities of the New Amsterdam Musical Association, Inc. are coordinated by the volunteer efforts of a small group of NAMA members with professional office, performance, and educational experience. Together, they work diligently to provide efficient and courteous service to the public. Administrators also conceptualize and implement strategies to improve NAMA’s fundraising efforts, including the Building Renovation Fund, an ambitious plan to improve the condition of the New Amsterdam Musical Association’s building of operations.

By the end of 2017, NAMA intends to modernize its plumbing system and replace the windows. By 2018, NAMA administrators hope to expand the organization’s capabilities to serve musicians, artist, and the general public through a musical library, computer classes, secondary education programs, and increased employment opportunities.

Our potential development opportunities rely on subsidiaries from private organizations, government offices and the continued support of music lovers like YOU!! All persons genuinely interested in improving NAMA in these areas are encouraged to become members of the Association or send a donation payable to the New Amsterdam Musical Association, Inc. 107 West 130th Street, New York, NY 10027. You can also make a donation by selecting the link: Membership/Donations. Your donations are much appreciated. Thank you! (All donations are tax-deductible)