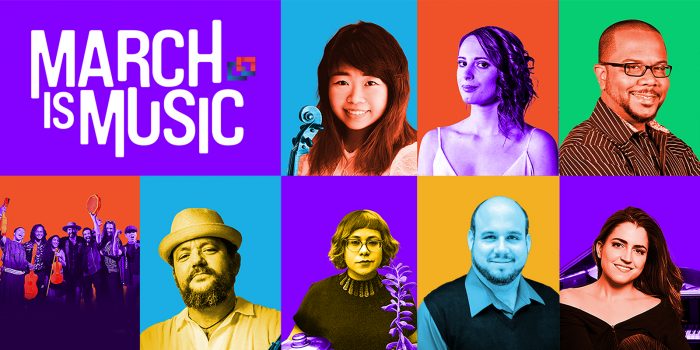 Performances run Fridays through Sunday from March 4-27 live at Pregones Theater. FREE and low-cost tickets ranging from $5-$15 are available at www.pregonesprtt.org. The complete concert schedule and event description are below.

March Is Music builds on a commitment to present artists of the highest caliber in The Bronx. This multi-genre series showcases the range and vitality of today’s varied musical cultures. Curated by seasoned Latinx artists, series concerts and dialogues draw links between Music, dance, and popular culture, highlight ruptures and continuities in form and content and make room for intercultural fusion and exchange. Bronx Piano Sundays, taking place during March, this subseries shines a spotlight on one of Pregones/PRTT’s prized possessions: a Steinway & Sons grand piano. Stellar pianists are invited to perform works of all styles and eras on this magnificent concert hall instrument. Showtime is 4 pm, and admission is always FREE.

Pregones/Puerto Rican Traveling Theater is an award-winning acting and music ensemble, multidiscipline arts presenter, and owner/steward of bilingual arts facilities in The Bronx and Manhattan. Our mission is to champion a Puerto Rican/Latinx cultural legacy of universal value through creating and performing original plays and musicals, exchanging and partnering with other artists of merit, and engaging diverse audiences. Our year-round programs offer attractive and affordable opportunities for arts access and participation to NYC residents and visitors alike.

Creator of the massive and triumphant Chorus of the Forest installation for the New York Botanical Garden, and winner of the 2022 Hermitage Greenfield Prize, composer, and multi-instrumentalist performer Angélica Negrón joins the also formidable Bronx Arts Ensemble in a much-awaited concert program featuring Marejada for string quartet and other original works. This MIM concert was first announced in spring 2020, proving that good things come to those who wait! “Wistfully idiosyncratic and contemplative” (WQXR Q2). “Mesmerizing and affecting” (Feast of Music).

Para cantarle a un Plenero – For one night only, Pregones Theater transforms into a gathering space for practitioners of the traditional Puerto Rican musical forms Bomba y Plena. They come together to celebrate, shine a light, and honor Héctor René “Tito” Matos Otero (1968-2022), Master percussionist, teacher, and honor the life, legacy, and influential voice composer, and cultural activist. During his time here, he forever changed the course of NuyoRican Music. Members of renowned ensembles Los Pleneros de la 21, Alma Moyó, and Los Hijo ‘e Plena play their panderos and barriles to sing songs and raise memory from Plena Lamento to soul purifying Bomba, in reverence of Tito Matos… cherished Plenero, gone before his time. This memorial event is Livestream Only. There will be no in-person audience — please join the musicians via FREE broadcast.

A soulful reed player known for his skilled mastery of the saxophone and the flute, Ricardo Pons is also a gifted arranger, composer, and teacher, musical director of contemporary Bomba y Plena sensation Viento de Agua (with Tito Matos), and former musical director of Pregones Theater. He has worked with legends like Chick Corea, Tito Puente, Eddie Palmieri, Mario Bauzá, Willie Colón, and Celia Cruz. He has played many of the great Jazz and Folk festivals worldwide, from Sydney to Chicago to New York. Now based in Puerto Rico, Pons travels to his former creative home in The Bronx to perform new and recent compositions for Latin Jazz ensemble.

Gabrielle Chou is an NYC-based pianist and violinist seeking to defy genres and break barriers in performance. A graduate of The Juilliard School, she has been a soloist with orchestras in the US, Austria, Italy, Spain, and Taiwan. She has performed in David Geffen Hall, Alice Tully Hall, Carnegie Hall, National Sawdust, and the Taipei National Theater and Concert Hall. She will perform works from Tchaikovsky, Rzewski, and Bolcom for this concert.

Praised by the New York Concert Review for her “aplomb” and “natural, individual interpretation,” Spanish pianist Enriqueta Somarriba develops her career in the US and Europe as a soloist chamber musician and educator. Her MIM concert program, titled Nature, religion, and myth—Musical Impressions of Ribeira Sacra, will feature works by Isidro Maiztegui, Claude Debussy, Luciano Berio, Henry Cowell, Ricardo Lorenz, and Franz Liszt.