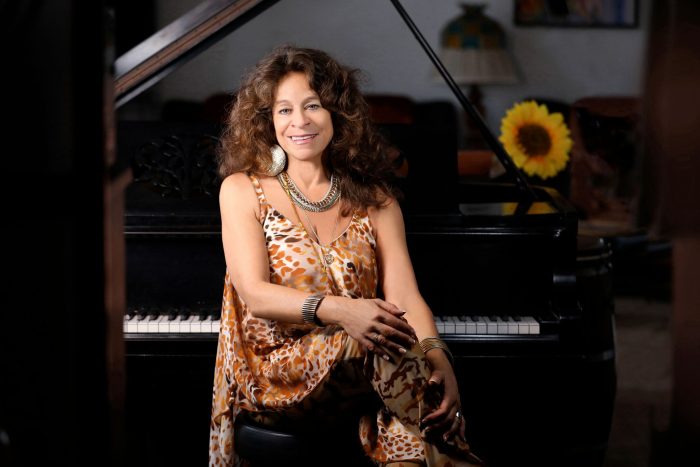 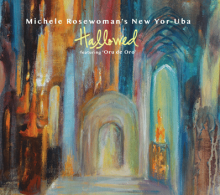 The anticipated next chapter of Michele Rosewoman’s New Yor-Uba marks its debut on November 1, 2019 with the release of “HALLOWED,” on the artists’ own label, Advance Dance Disques. CD release events, will kick off with a residency at New York City’s ZINC, 82 West 3rd Street, 212.477.9462, on November 2 & 8, 2019 at 7:30pm & 9:30pm, presented in association with Habana/Harlem®  Neyda Martínez & Onel Mulet, and a performance at The Philadelphia Clef Club of Jazz on December 21.

Following up on their 2013 double-disc release, which celebrated 30 years and garnered NPR’S #1 Latin Jazz Recording of the Year Award, Rosewoman continues her artistic exploration along with her cast of master musicians and folklorists. With an evolution in personnel, New Yor-Uba returned to the studio to record and present its next groundbreaking offering, “HALLOWED”.  Recorded in 2017-2018 at Systems Two Studios, the return of the ensemble represents the next body of work in its 35-year musical evolution. Her current and long-standing ensemble members are some of the brightest and most sought out voices from both the spiritually based Cuban folkloric tradition and contemporary jazz worlds. To conceive a thoroughly uncompromised synthesis of both, Ms. Rosewoman has spent a lifetime immersed in the essence of these two profound musical traditions.

In recent years, Rosewoman delved more deeply into a distinct liturgical set of rhythms, preparing her on multiple levels to manifest a new and challenging composition. “Oru de Oro”, an extended work commissioned by Chamber Music America,  is considered adventurous and pioneering and has been well-received by audiences including the D.C. Jazz Festival, Jazz at Lincoln Center’s Dizzy’s Club and the 2018 Chamber Music America Conference.

Oru de Oro roughly translates as  ‘room of gold’.  “It is an instrumental body of music that I created around a venerated sequence of rhythms with often baffling transitions, known as the Oru Seco or Oru del Igbodu, which is played on traditional Batá drums in sacred chambers,” Rosewoman explains.  “Compositionally, Oru de Oro is anchored in the rhythmic patterns that are associated with various Orishas (Yoruba deities), endowing them with unique musical content while fully integrating featured soloists and master drummers.” Oru de Oro is presented on “HALLOWED” as multiple tracks (1-10) that can be seamlessly heard as one unified rhythmic suite.

“I’m very rhythmically motivated, both as a composer and pianist,” says Rosewoman. “The Batá tradition explores the cracks of time—they reveal endless nuances that one never knew existed.  I think it’s in my nature to explore time in this very way – that’s one reason why I am so drawn to and intrigued by it. This latest work is built on the foundation of the form, contours, and mastery of folklorist and percussionist Román Díaz (a treasured member of New Yor-Uba since 2008)—and the way he plays the traditional Oru Seco.  It is a strict tradition, but there are many points where those with the knowledge can take liberties. Each master drummer interprets it somewhat differently and definitely has his own feel.  Sometimes the order in which the Orishas are addressed,  and thus the order of rhythmic patterns, are changed.   Our improvisations and solo sections are obviously not a part of the traditional Oru Seco.  To fit those in involved various stages of adjustments to make room for them and to find the sections that could accommodate them naturally, while staying out of the way of some of the most nuanced moments of the Batâ.  It’s almost like we’re decorating what the drummers do—which is not to say there isn’t already a lot of decoration. But the ensemble is endowing all of these rhythmically-defined Orishas with musical content where traditionally there isn’t any.  In fact, from what I’m told, no one has previously written a musical piece (in contemporary form or otherwise) built on the Oru Seco in its entirety.”

The final two tracks are also suites with surprises built-in. The Wind Is the First To Know, (a tribute to Oyá) features Román Díaz’s and Nina Rodriguez’s heart-stirring vocals over Fender Rhodes, prefacing a purely folkloric presentation that later intersects with the rest of the ensemble.  The final track, Alabanza, (Praise) is full of instrumental textures and groove, rhythm and mood — a piece that earned Ms. Rosewoman a 2016 Latin Jazz Grammy® for her work as both pianist and composer on the track which made its debut on the Afro Latin Jazz Orchestra (ALJO) recording, “Cuba, The Conversation Continues”.

The cover art on the double CD is a detail from an original oil painting entitled Cathedral Splendor by her late mother, Estera. Rosewoman explains, “Any 2-inch section of any of her paintings is a painting within itself.  There are energies and beings vibrating throughout her body of work. The more you look,  the more you see – nothing accidental – and her irrepressible manifestations gave life to endless layers, worlds and beings. I feel close to her way of seeing and find many similarities in my way of hearing. This chosen image embodies the music on the disc in many ways. Her vision has always stirred mine and her art on this cover serves as a portal into what I hope will be a hallowed and rich musical experience for those who enter.” Estera’s art legacy includes oil painting, watercolors and printmaking with forays into batik and experimentation in many mediums. Her life-long interest in culture is evidenced in her sizable body of work.

Some personal insight into each track by Michele Rosewoman:

Oru de Oro–a rhythmic suite (Tracks 1-10):  Track 1, We Need You Now (Eleggua, Oggun, Ochosi) is an appeal to the guerreros/warriors that opens this suite, as practiced in traditional ceremonies… (and boy, do, we need them now.)  The door to a sacred journey swings open (Eleggua).  The ensemble weaves itself around beautiful melodic bata conversation, as it does from beginning track to end track—here, shifting gears to 7/4 solos against the 4/4 moving train of the bata (Oggun) and then downshifting for the creep of the hunt as Ochosi spots, pursues and moves on his prey.  Tenor and alto solos culminate in a short group improv and bata make the final sprint. In this manner, the tracks move from one energy to the next–from one life principle to the next- representing creation and humanity–featuring each master soloist and folklorist in a complete integration of musical forms– further reflecting on the links between these profound musical traditions. Track 2, Mountain Sky, Healthy High  (Obaloke, Inle, Babaluaye) Landing on a mountain peak, time teeters as the horns and harmonies touch the sky and evoke fresh air trombone and piano solos.  Then, touching earth, bata ask questions, ensemble answers. Magical ingredients combine- to alter, heal and restore the mind. Track 3, Forest of Secrets (Ossain)  Transitions, moods and colors –from a delicate ballad-like flute feature, to runaway tempos for trumpet and piano solos, to a spacious funk groove with floating horns. Track 4, Color Crown (Osun, Dada, Oggue) offers a bata/piano feature, where piano adorns and joins in the execution of specific bata conversation, followed by free tonality tenor, piano and trumpet solos on a bassline groove. Track 5, Hallowed (Obatala) is an homage to the Orisha who represents the most holy and sanctified.  Characterized as elderly and slow moving, his power lies in peace, purity and wisdom,  Complex low and slow transitions steadily build up to a piano/batá feature setting the stage for airy bass and trombone solos.. Track 6, Puntilla’s Gift (Aganyu) is a reflective ballad with saxophone solos, wrapped in colorful piano threads—built on a multi-rhythmic bata melody and paying tribute to Rosewoman’s  mentor, master folklorist Orlando “Puntilla” Rios–a 25-year featured member of the ensemble, until his passing in 2008. Track 7, Two Bodies, One Heavenly Soul (Orúnmila, Orisha Oko, Ibedji) A melodic angular opening into an extended high energy piano/soprano free tonality duo on top of soaring bata energy, culminating in conversation, confirmation and new direction. The drums govern in Track 8, The Heart of It (Chango)  The tamboreros (drummers) are featured in all their glory — the precision, mind-boggling–and the ensemble learns what it takes to keep up and be worthy.   Track 9, Flowers That Bloom In the Dark (Oya, Yewa, Ochun, Oba) is a tribute to the feminine deities. Strong but gentle complexity rides the wind–into an interactive funkified improv grounded on the groove -concluding with intricate conversation that bursts into evening longings and life-long understandings.  Track 10 – There is Here, Then is Now  (Yemaya, Odudua)  We frolic in the wide-open sea with piano/soprano and piano/trombone duos that preface a unified prayer –and then we dive again into eternal cycles, where water meets sky–as the beauty of the bata takes breath away. Track 11, The Wind is the First To Know (for Oya) is a vocal feature with Fender Rhodes.  A suite, starting with a keyboard/ bass duo offering a backdrop to Roman Diaz’s poetic vocal insights into the deity Oya– baritone saxophone then joins for a warm 5-horn rendition of a melodic prayer and Nina Rodriguez’s heart-touching vocals eventually take us into a beautiful purely folkloric presentation (bata, lead vocals and  chorus) before piano and ensemble enter— solos  follow and we end with pure folklore once again.  Track 12, Alabanza (Praise), the 3rd suite.  Bass grooves that never touch the one set up horn hits equally mystifying, then horn orchestrations and bata set up both open tonality groove and chord-change solos, until part two–another world, where rumba, quinto and drum solos take over, leading into piano guajeo and horn solos, ending with a bata and horn outro–and a prayer.