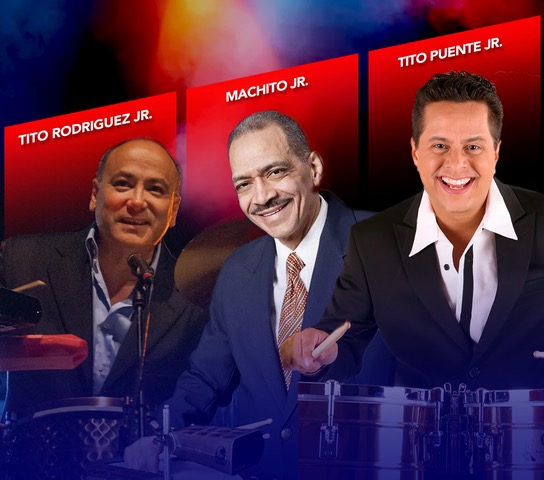 Lehman Center for the Performing Arts presents Palladium in the New Millennium, a night reminiscing on the era in the 1950-60’s where Machito, Tito Puente, and Tito Rodriguez headlined as “The Big Three” at the Palladium Ballroom! The sons of these three legends, Tito Puente Jr., Mario “Machito” Grillo, and Tito Rodriguez Jr. put together “The Big 3 Palladium Orchestra” to carry the torch from their fathers. On Saturday, March 5th, 2022, at 8pm, they will come together after 20 years to play the original arrangements of the great master Ray Santos and relive the glorious and golden age of music in New York. This show is honoring Robert Sancho, who has worked incredibly hard for more than 20 years to make the arts shine on the Bronx stage. This event will be hosted by Joe Conzo Sr. and joined by special guest performer John “Dandy” Rodríguez.

The night is dedicated to celebrating the contributions of Robert Sancho, the Vice President of Development and External Affairs at the Bronx Care Health Systems. For the last 20+ years, Mr. Sancho has produced excellent season opening concerts at Lehman Center for the Performing Arts. Some of the notable performers who have graced our stage in these concerts include Eddie Palmieri, Andy Montañez, the Mambo Legends, Tito Puente, Dave Valentin, Cheo Feliciano, MichelCamilo, the Machito Orchestra, and many others.

Lehman Center for the Performing Arts is on the campus of Lehman College/CUNY at 250 Bedford Park Boulevard West, Bronx, NY 10468. Tickets for PALLADIUM IN THE NEW MILLENNIUM on Saturday, March 5th, 2022 at 8pm($100, $65, $55, $50, $45) can be purchased by calling the Lehman Center box office at 718-960-8833 (Monday through Friday, 10am–5pm, and beginning at 4pm on the day of the concert), or through online access at www.LehmanCenter.org.Lehman Center is accessible by #4 or D train to Bedford Park Blvd. and is off the Saw Mill River Parkway and the Major Deegan Expressway.

In the 1950s, America fell in love with mambo, and “The Home of Mambo” was the Palladium Ballroom at 53rd Street & Broadway. The Palladium Ballroom was the heart of mambo and Latin music until it closed in 1966. Initially starting as Alma Dance Studio, it was renamed the Palladium Ballroom in 1946, with Machito headlining and Tito Puente appearing on the scene as a director in 1948. Later, singer Tito Rodriguez and his band began to compete with Machito and Puente as headliners, establishing Machito, Puente, and Rodriguez as the Big 3. The Big 3 Palladium Orchestra is the brainchild of Machito’s son, Mario Grillo, as he wanted to get closer to the Puente and Rodriguez families to represent the music of the Palladium era. With 20 members and a repertoire of more than 2,000 tunes, the Big 3 Palladium Orchestra recreates all the glory of the Latin big band and the mambo craze of the 1950s with its tropical-flavored trumpets, be-bop piano and drumbeats.

Lehman Center for the Performing Arts, Inc. is supported, in part, with public funds through the SVOG Grant by the U.S. Small Business Administration implemented by Senator Charles Schumer, and from the New York City Department of Cultural Affairs in partnership with the New York City Council. The 2022 Season is also made possible through the sponsorships by New York State Council on the Arts, Spring Bank, Con Edison, and the Friends of Lehman Center.