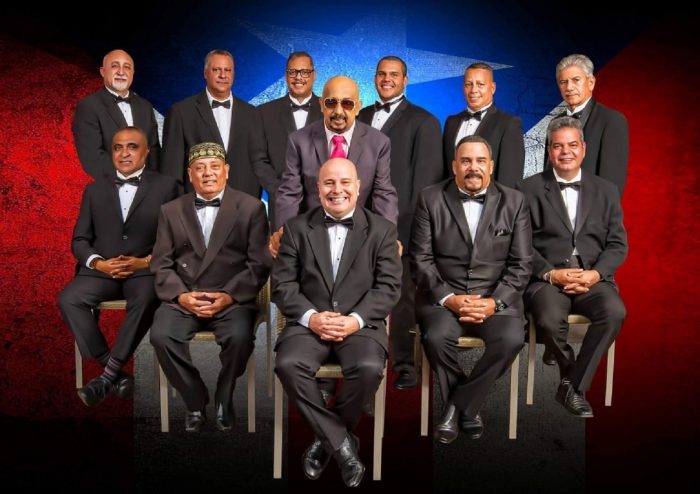 LEHMAN CENTER FOR THE PERFORMING ARTS and GOYA FOODS is proud to present one of the most popular salsa bands ever, LA SONORA PONCEÑA featuring the piano virtuosity of PAPO LUCCA and long-time leading vocalist of the band YOLANDA RIVERA on Saturday, November 2nd, 2019 at 8 pm. As the orchestra celebrates their 65th Anniversary, they will turn up the heat for a night of old school salsa.

*VIP Reception: The Havana Café, Goya Foods, and Lehman Center special VIP pre-concert wine & hors d’oeuvres reception will start at 6:30 pm. VIP tickets include the reception and the best seats in the house. Sponsored by Havana Café Restaurant and Goya Foods. Lehman Center is accessible by #4 or D train to Bedford Park Blvd. and is off the Saw Mill River Parkway and the Major Deegan Expressway. Low-cost on-site parking available for $5.

LA SONORA PONCEÑA was formed in Puerto Rico in 1954 by Enrique “Quique” Lucca, who named the band after the famous Cuban band Sonora Matancera and his home city of Ponce, thus Sonora Ponceña. Don Quique created a distinct salsa sound using a full percussion section, with only trumpets in his horn section that in turn harmonized with the piano and voices. By 1956 the group included pianist Vicentico Morales, with Quique’s ten-year-old son, Enrique “PAPO” LUCCA Jr., already at the piano writing arrangements. Papo recorded his first piano solo, “Smoke Mambo“, in 1958 at age twelve. By 1960, the band had performed in New York, catching the attention of Fania/Inca Records owner Jerry Masucci. The band’s early recordings featured various popular vocalists of the time until Humberto “Tito” Gomez joined the band in 1967, and Luis Guillermo “Luigi” Texidor joined the following year. After studies at the Puerto Rico Conservatory of Music, Papo was an accomplished pianist and arranger, and in 1968 Don Quique stepped down as musical director. Now under Papo’s direction, La Sonora Ponceña’s sound became a fusion of traditional Cuban and modern Latin styles. In 1969 they released their first Inca LP, with all arrangements by Papo, Hachero Pa’ Un Palo, whose hit title song established them as salsa pioneers. That album was a hit in New York, as well as their second release, Fuego en el 23 (1969). La Sonora Ponceña recorded 29 more albums for Inca, including 8 that featured singer Yolanda Rivera, 1979’s album La Ceiba that featured Cuban singer Celia Cruz, and by 1980 were a huge success. For their 1980 release New Heights, they began to make albums in English and to include Latin jazz themes, establishing the international character of the band. As salsa romántica became popular, they adjusted to commercial forces without deserting their trademark sound. In 1993, the band was awarded the Congo de Oro for the best international band. La Sonora Ponceña has recorded over 35 albums, garnering dozens of platinum and gold releases of unforgettable music with hits such as “Fuego en El 23”, “30 Anos”, “Juana Bayona”, “Moreno Soy“, “Borinquen“ and “Suena El Piano“. During the celebration of the band’s 50th Anniversary, the 23rd Día Nacional de la Salsa, celebrated in Carolina, Puerto Rico, was dedicated to Don Quique, Papo Lucca, and La Sonora Ponceña. Distinguished by their legendary combination of guaracha, salsa, and Latin Jazz, more than a hundred musicians have played in the band over the years. La Sonora Ponceña’s most recent albums are 2011’s A Band and Their Music El Gigante Sureño, and 10 Para Los 100, which was released in 2012 to celebrate Don Quique’s 100th birthday!

YOLANDA RIVERA was born in Ponce, Puerto Rico and her family moved to New York City when she was a child. Her first break was in 1969 as a singer in Willie Rosario’s band. She returned to Puerto Rico in 1975, performing with several orchestras including Joe Rodriguez’s orchestra La Terrifica, which whom she recorded the album Sabor a Pueblo. Her big break came when she joined La Sonora Ponceña in 1977 and subsequently recorded eight albums with the band over the next seven years. The song “Borinquen”, a musical tribute to Yolanda’s native Puerto Rico from the 1980 album Unchained Forcede, made her a star. Yolanda Rivera is considered one of the most famous leading singers of La Sonora Ponceña with songs like “Rumba en el Patio” and “Madrugador”. Her repertoire includes salsa, plena, bolero, guaguanco, son montuno, and guaracha.