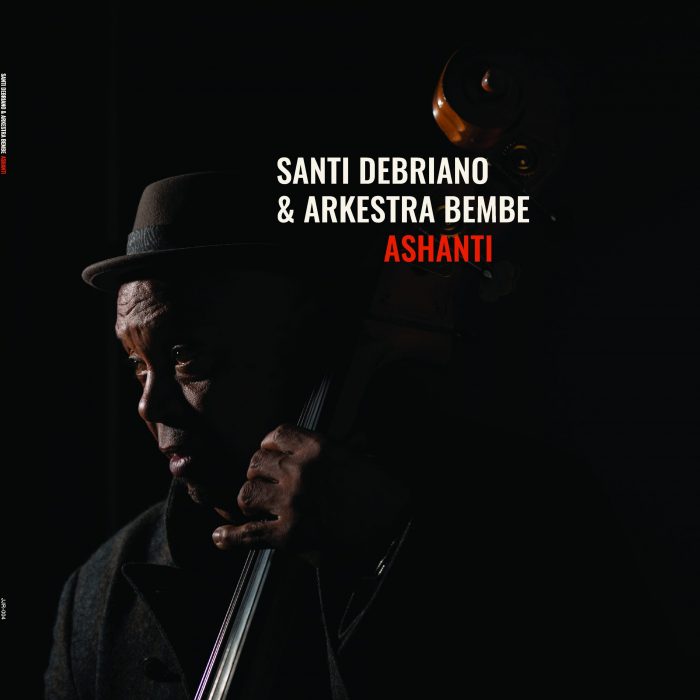 Panama-born and New York-based Santi Debriano steers away from simplicity. The bassist-composer, who emigrated to the United States from Panama at the age of four and later obtained an ethnomusicology graduate degree from Wesleyan University, has made a point to transpose Afro-Caribbean tradition onto his compositional work. His latest mark, Ashanti, finds West African language and ritual at its core. Alongside his Arkestra Bembé, Debriano harnessed the power of the Yoruba tribe’s bembé — a celebration involving food, drink, music and dance — and fabricated his own, pandemic-inspired jam session tradition of a similar intimacy. Countless weeks of bembés yielded Ashanti, the stalwart bassist’s eighth release as a leader and first via Jojo Records, due out on November 18, 2022.

Back during the pandemic lockdown, Debriano made a sanctuary for New York area jazz musicians deficient in a communal practice space. In the basement of his Staten Island home, he would organize weekly bembés, creating a musical lifeline, a means of survival, for artists until it was safe to venture into the studio again. “At first, the weekly bembés were loose and unstructured,” Debriano shares. “But as they grew in size, it enticed me to start expanding on my arrangements and experimenting with them.”

These sessions afforded the bandleader the opportunity to fashion compositions for a larger cast while witnessing fantastic interactions between instrumentalists. As weeks went by, Debriano’s compositional imagination stretched in tandem with what would become his Arkestra Bembé. This stellar cast finds Debriano as anchor on bass with Robby Ameen on drums, TK Blue on alto saxophone, Andrea Brachfeld on flute, Tommy Morimoto on tenor saxophone, Ray Scro on baritone saxophone, Emile Turner on trumpet, Adrian Alvárado on guitar and Mamiko Watanabe on piano.

Wrought by challenging chord developments and sudden variations in tempo, a typical Debriano composition is nuanced and even tricky. Through the routine workshop participation in these bembés, band members found an intimate opportunity to indulge in Debriano’s remarkable writings.

The record opens romantically with “Angel Heart”, a dedication to Debriano’s wife. Pulsing with romance, the composition is also a masterclass in intuitive string interplay, where the Brazilian-born Adrian Alvarádo is heard on his Flamenco guitar adagios while Debriano introduces African and Caribbean phrasing on bass. “At the core of ‘Angel Heart’ is a melody that’s been in my head for maybe two or three years. I’d rewritten and rewritten it. I realize now that what it was waiting for was a guitarist like Adrian,” Debriano shares.

The title track “Ashanti” is the most spiritually African in its intentions of all tunes on the record, Coincidentally, this melody rolled off of Debriano’s subconsciousness, “almost completely intact” as he describes, sourcing its name from a conversation he had with man in the West African nation, Togo, who told Debriano that he was named after the Ashanti tribe. Steeped in the ancestry of its namesake “Ashanti” kicks off with the rumbles of Robby Ameenand includes an extended bass solo from the bandleader.

It’s no surprise that a record assembled under the premise of survival would toy with so much imagination. The back to back tracks “Imaginary Guinea” and “Imagined Nation” are mystical and exploratory by nature, the former offering a trance-like, eerie prayer in 6/8 measure; its melody extracted from a Haitian Voodoo folklore belief that when a Haitian dies, his soul follows a river across the Atlantic Ocean to Guinea, where it will reside permanently. Ray Scro distinguishes himself on “Imaginary Guinea” with a resonant, surging solo on bari sax.

Images of water continue to flow across the record; the shapeshifting arrangement of the late, great marimba player Bobby Hutcherson’s “Till Then,” came to fruition when Debriano asked pianist Mamiko Watanabe to create a descendent opening, “like water tumbling down a waterfall.” The results are a testament of her artistry. In succession, “Spunky” turns to a  straight-ahead mashup of funk and swing with shining contributions from the horn section, including a taste of New Orleans from the Louisiana-born trumpeter Emile Turner.

“Arkestra Bembé Boogaloo” introduces an upbeat, pulsating Latin rhythm held together by Ameen on drums overdubbed on the Cuban guiro, laying down the foundation for an infectious Afro-Caribbean composition. “Basilar” maintains this Latin American spirit, with soaring solos from Tommy Morimotoon tenor sax and the inimitable Andrea Brachfeld on flute before a parade of rhythm culminates at the hands of Ameen on drums.

A virtuosic collaboration between Debriano and saxophonist Ray Scro yields “Mr. Monk and Mr. Mingus.” Written by Scro and arranged by Debriano, the pair honor both jazz giants’ use of metric modulation and affinities for the flatted fifth. Both musicians had a heightened philosophical sense of what Mingus meant when he famously said “music has to have the beauty and the ugliness.” In his own interpretation of the phrase, Debriano shares: “I think what he meant by that was to combine harmony and disharmony in a pleasing way, but with some element of chaos also.”

The record closes with a two and a half minute arrangement of Charles Mingus’, “Portrait”, which was written for his wife, Sue, who recently passed. Debriano pays tribute to both on this reflective solo. At its core, Ashanti is the product of commitment, a banner of sympathy and understanding between musicians born from a crossroads. With a shared fixation on this music, this practice of endurance became sacred for the members of Arkestra Bembé, who effortlessly merge their cultural and creative backgrounds onto a plain of spiritual comprehension. “Because of the shared physical space as we worked out the details of this over an extended period, I think we’ve been able to achieve something special that took us all into a deeper place.”