“The drum is the pulse of our culture, and it unites all of our people regardless of where we come from.” Manolo López, Founder of the Collective Cosa Nuestra 1 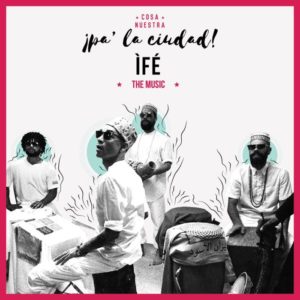 Cosa Nuestra celebrated Latin music and culture at La Factoria (The Factory), one of Greenpoint Brooklyn’s newest venues. The event was billed as “Pa La Ciudad!” (For the City) and it was hosted by the renowned “new gen,” Nuyorican poet and actor, Flaco Navaja, who guided the crowd through a transcultural history of El Tambor aka the drum – from Africa to Latin America and New York City.

At La Factoria, the mood and the atmosphere was festive and the crowd – an eclectic mix of hipsters, island Puerto Ricans, Latin Americans, Nuyoricans, Pan Latinos and a sprinkling of Baby Boomers – were intent on an intergenerational celebration.

As xenophobic, anti-immigration politics and Puerto Rico’s crises sober us up, Cosa Nuestra seeks to use art, culture, and cuisine to bring Latino ethos to life and heal and transform the conversation around Latinidad. Proof of this event was the curative power of our Afro-Caribbean rhythms – celebrating Afro-Latinos!

The personal magnet for this review was ÌFÉ. Their performance was a mind/heart sojourn of inter-dimensional quality with a “Ęlégbá” mindset (Divinity foremost in opening Pathways to Consciousness).

ÌFÉ is a collaborative team of devotee/artists who contribute their talent, soul, and spirit to a precedent-setting creation not seen since Lazaro Ros’s “Sintesis 1 and 2” (1990s) where Afro-Cuban, predominantly Yorùbá (Lùkùmí) infused religious music for Orisa was mixed with progressive electronic fusion rock jazz. Sintesis was cutting edge then. ÌFÉ is cutting edge now – carving a similar yet distinct path of their own – beyond clichés and “electro-rumba.”

The result? Joy and waves of Euphoria! 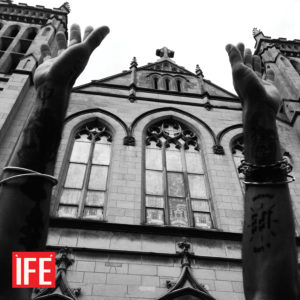 Behind the scenes, the paternal mentor is veteran Akpon Ol’ Obàtálá Emilio Baretto (Master Devotional Singer to Òrìšà (The Divinities) – Yorùbá Deities – akin to a Jewish Cantor) graciously guiding ÌFÉ’s spirit filled team of musical Sky Walkers with Yoda like acumen. Decades of dedication to the craft of devotional song / cultural understanding of Orisa, is selflessly passed on.

With divinely sanctioned “Apoyo Fraternal” (fraternal support) by fellow Awo (Ifá Priest) Èjì Ogbè Rafael Maya and the first class team of dedicated musico-artistes present a formidable priestly presence onstage – which is somewhat unusual in venues of this sort. It was a breath of fresh air, ethereal yet grounded in a renewed approach to tradition. The supporting cast at this event was Anthony Sierra, Beto Torrens and Yarimir Caban where her voice – at modulated devotional invocations to Òrìšà (The Divinities) evoked heartfelt emotions and raised goose bumps.

Before a full house as on the new CD, ÌFÉ brings an organic, digital-enhanced Yorùbá-Lùkùmí inspired, creolized marinated Afro-Caribbean sensibility to the world. This event, dedicated to Africa and the drum, debuted their new production entitled “IIII+IIII.”

ÌFÉ began with Preludio (Èjì Ogbè, Track 1). Wisely syncing with the first Odu Ifá (Principal Chapter of God encoded wisdom), which initiated a brief yet powerful journey through primal creation. Al Capella chants of Ifá verse poetically state: “Horses we mount with Ifá as King of this world guiding our essence on our way to “ÌFÉ”…

The ascension prepared the audience to ground with ”Come Down (Umbo),” a digital-clave multi-lingual male lead followed by the sweet diva Yarimir Caban. Her vocals – at times digitally modulatated — flow like “guarapo de caña” (extracted sugar cane and syrupy juice) – suggesting a flattering call for Yemaya / Yęmōja (Mother of Children of Fish) descend and heal her children.

“Aro” (ritmo electro-bata) for Yemaya / Yęmōja (Mother of Children of Fish): Crescendo building slow to rapid tempos set to blue lighting and white cloth. The tune transports the audience to an oceanic realm in preparation for what is to come.

“Prayer for Odùduwà” (Para Merceditas) – The first King of the ancient primordial Yorùbá city of Ile-”Ife” impresses with depth and somber respect as it segues to devotional honor to Obàtálá with “Baba Loroke” (Father of the mountain of wealth). Gently lead by Yarimir Caban.

ÌFÉ’s evening excursion closed with “Bangah” (Pico y Palo) with an invitation to liberate the audience from mental and spiritual slavery and is inspired by Puerto Rico’s liberation. From the opening inhale/exhale oxygenating intro to the honoring of warrior Father divinities Ògún (Yorùbá) and Sarabanda (Bantu / Ki-Kongo) this flow invigorates with electro-bata ChaCha Lodafun rhythm, creolized Bozal “Sia! Also, it announces the intentional use of “Nsalo Maleko,” a pre-Islamic creolized retention of ancient Central African greeting of PEACE. Universal then, universal now!

Performed in a festive secular venue, “ÌFÉ” succeeded in delivering a genius, heart touching sequence of sacred songs. A unique spiritual ambiance was created before our eyes and ears – unusual for a raucous nightclub and a healthy and much needed humanitarian message was delivered con Sabor Criollo (creolized flavor).

To close, from the outset, ÌFÉ’s stage presence establishes an ethereal yet firmly grounded en clave 2/3 time (meter structured and controlled) and delivers consistent and ageless advice to humanity: cultivate Iwa Pele, Iwa Suuru, Iwa Rere (a character that is gentle, patient, content). Their gentle, soothing sweet water, sonic signature is consistent with the IFÁ principle of developing gentle, patient and soft character as human virtues. And, ÌFÉ surprises when the flow intentionally morphs into a visceral and muscular staccato groove crafted to stimulate and ultimately unshackle the human heart towards Expansion + Love = Liberation. ÌFÉ excels with ​Ášé / Aché!