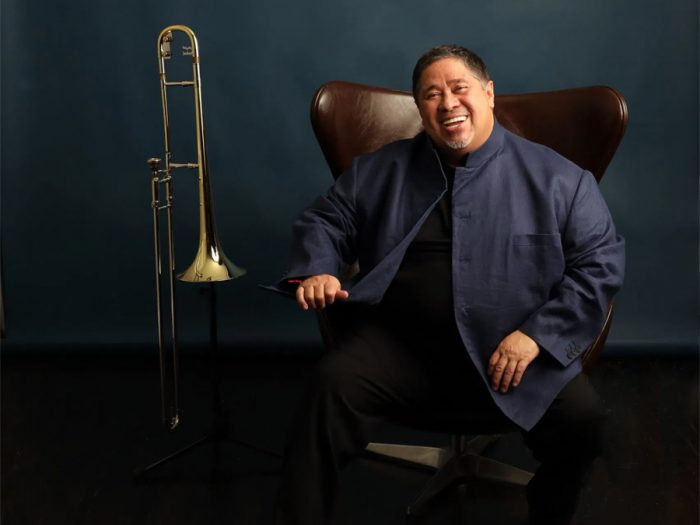 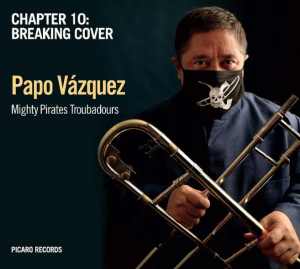 Known for an iconic career that spans 40 years, GRAMMY-nominated Latin music luminary Papo Vázquez is pleased to release Chapter 10: Breaking Cover, a new album with his Mighty Pirates Troubadours. Due out on November 13th via the artist’s own Pícaro Records, Chapter 10: Breaking Cover features a varied program of Vázquez’s original music that displays his signature fusion of jazz and Puerto Rican folkloric music. On his tenth release as a leader, Vázquez swiftly demonstrates why he is one of the leading voices of the contemporary Latin jazz scene.

Vázquez was described by The New York Times as “brash and precise… helping to drive the music, giving it snap and ferocity.” His deep knowledge of the indigenous music of the Caribbean peoples, intertwined with his decades-long dedication to jazz (sparked by a love for John Coltrane and J. J. Johnson) affords him to be an expert in fusing these two idioms. On Chapter 10: Breaking Cover, Vázquez’s exquisite musical breadth is on display as he seamlessly moves through various rhythms (Holande, Bomba, Cuembe) and styles (Jazz, Latin Jazz), fusing them together as only he can.

The music on Chapter 10: Breaking Cover is informed by his eclectic career that began in his native Philadelphia. Vazquez spent his early years in Vega Baja Puerto Rico before settling back in Philly, where he was raised. After earning his stripes with local Latin bands, the precocious musician moved to New York at age 17. He quickly ascended the musical ranks as he built up a robust resume with legendary salsa stars such as The Fania All-Stars, Ray Barretto, Willie Colón, Grupo Folklórico y Experimental Nuevayorquino, Eddie Palmieri, Larry Harlow, and Hector Lavoe. He cut his teeth at New Rican Village, a tiny artist-run space in the East Village, where he and other adventurous players would jam without restrictions, reframing Latin music within jazz and vice versa.

Concurrently, Vázquez’s reputation as a jazz musician grew, as he became a leading player in New York’s burgeoning Latin jazz scene of the late 1970s. He was a founding member of Jerry Gonzalez’s Fort Apache Band and Conjunto Libre, as well as Puerto Rico’s popular Latin fusion band Batacumbele. With Batacumbele he performed, composed, arranged, and recorded on several albums from 1981 to 1985. During this time, Vázquez first began experimenting with “bomba jazz”; a fusion of jazz and traditional Puerto Rican bomba rhythms. Upon his return to New York, he joined Tito Puente‘s Latin Jazz Ensemble, traveling with them as a principal trombonist, and toured Europe with Dizzy Gillespie‘s United Nations Orchestra.

For the next two decades, Vázquez appeared on countless albums as a recording artist. Among the dozens are Wayne Shorter’s Alegria; Ruben Blades’ Amor y Control, Antecedente, and Caminando; Dave Valentin’s Tropic Heat; Bebo Valdez’s Bebo de Cuba; Arturo O’Farrill’s Bloodlines; and many, many others. In 1993, Vázquez released his debut as a leader, Breakout, and in 1999 and 2000, he released At the Point, Vol. 1, and subsequently Vol. 2., with the group that would eventually become known as the Mighty Pirates Troubadours. In 2008, he released Marooned/Aislado with the expanded Pirates Troubadours (a 19-piece Afro-Puerto Rican Jazz Orchestra) which went on to receive a GRAMMY nomination for Best Latin Jazz album. Chapter 10: Breaking Cover follows the group’s 2015 album Spirit Warrior, which was referred to as “a superb album by one of the most expressive voices in Latin music” by Raul da Gama of Latin Jazz Network.

Vázquez’s latest release is a true product of the COVID 19 era. Conceived before the coronavirus was on anyone’s mind, Vázquez plans to record this past April were derailed when lockdown regulations came into effect. Finally, in June, when gatherings of 25 people were approved in the tri-state area, Vázquez and his Mighty Pirate Troubadours “broke cover” to rehearse (socially distanced, of course), and eventually record. As writer Ben Ratliff says in his liner notes: “Papo’s music contains a lot of the past, in salsa and jazz and jíbaro music and bomba and plena; as one of this country’s greatest musicians, he has a lot to summarize. But the circumstances behind this serious and wise record—as well as the life-force of Papo’s playing, arranging, composing, and the decisive way he moves through the world—inevitably convey the present.”

Chapter 10: Breaking Cover displays Vázquez’s mesmerizing facility on not only his instrument but also his prowess as a composer and arranger. His talents in this arena have long been admired; he was the first artist to receive a composer’s commission (Iron Jungle) for the Afro-Latin Jazz Orchestra, then a resident orchestra at Jazz at Lincoln Center. His first classical composition, “Palomita – Afro-Caribbean Suite” (which to this date, the first time Bomba and Plena were performed with a Chamber Orchestra) in the USA, was commissioned by the Bronx Arts Ensemble and premiered at the Hostos Center for the Arts and Culture in the Bronx in 2000. In 2009, Vázquez premiered his composition “Oasis” with the Bronx Arts Ensemble, which then expanded to the Oasis Project. In 2010, the Oasis Project premiered at the renowned Pregones Theater and earned him a prestigious honor from the National Endowment for the Arts (NEA) Master Artist award from Pregones Theater. He was commissioned by Wynton Marsalis to compose music for the Jazz and Art series, conducted and performed with JALC orchestra in August 2019.

Vázquez’s forthcoming release features a varied program. As Ben Ratliff says in his notes: “El Cuco/The Boogeyman” is built on a piano riff Papo wrote a few years ago; he realized that it could stand for the knock on our psychic doors we all started hearing in March. It isn’t possible to think of “Shadows,” the ballad, as unrelated to those lost during the first spike of the virus. In the rumba “No Te Rindas” (“Don’t Give Up”), the vocalist Jose Mangual Jr., who worked with Vázquez in Hector Lavoe’s band back in the 1970s, improvises in honor of departed rumberos. One’s past is one’s present, too.
Celebration and togetherness can be imagined: the journey of “Mr. Babu” from Africa, the killer-elite dancers conjured in “New York Latin Jazz Mambo,” the Puerto Rican family music of “Saludo Campesino” and “Fiesta En La Sanse,” named after the carnival in Old San Juan, suggests the party we will have when this is over.