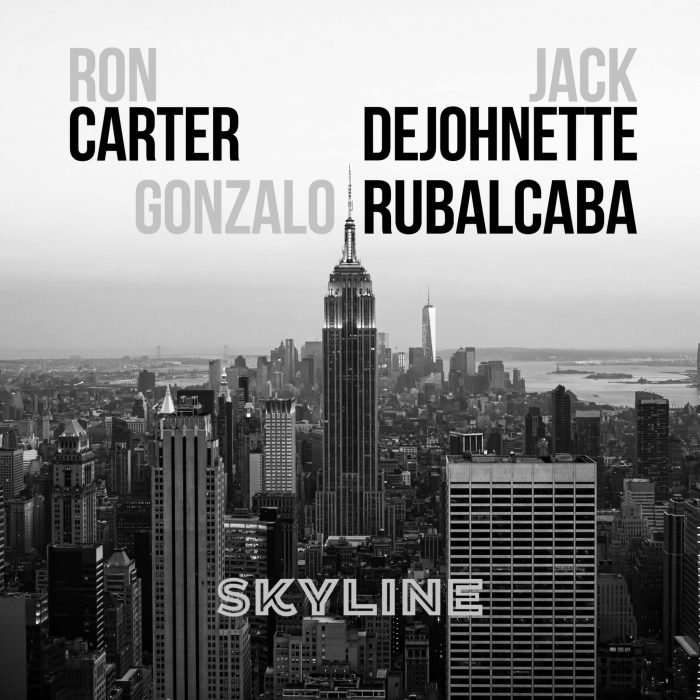 Pianist Gonzalo Rubalcaba is thrilled to announce the release of Skyline, his eighth album on 5Passion Records and the first in a planned trilogy of piano trio albums for the label Rubalcaba co-founded in 2010, due out on September 17, 2021.

Rubalcaba — raised and educated in Havana, where he played professionally as both a drummer and a pianist before emigrating first to the Dominican Republic in 1991 and then to Miami in 1996 — tells celebrated jazz journalist Ted Panken in Skyline’s liner notes that early gigs with the giants of the art form like bassist Ron Carter and drummer Jack DeJohnette turned out to be his, “real school, [his] portal to a different relationship with American musicians and American music.” So when Rubalcaba had a new trio project in mind, one rife with Afro-Cuban rhythms but informed by years studying what musical conversation between musicians should sound and feel like, he knew he needed sidemen who could pull off both elements with equal parts feel and erudition.

Carter and DeJohnette had to round out this trio.

“No matter what music you put in their hands,” Rubalcaba tells Panken in the liners, “at the end, they convert that music into something personal. That to me has an amazing value.

“But at the same time, they understand their function at every moment…. Ron and Jack know how to keep their sound, their spirit while fulfilling at a very high level your request as a producer or musical director, or composer. They combine a special talent and a strong personality with a high level of consciousness of responsibility—everything together.”

While there’s never any doubt Rubalcaba is the lead sonic architect here, it’s evident on all nine cuts, as Panken notes, that he “didn’t want this to be a “Gonzalo record per se; he wanted to create a conversation from multiple points of view.” New perspectives are applied to the familiar, as each musician offers up a pair of his own previously recorded tunes to the trio’s (re)interpretive lens. For an illustration of the group’s methodology, take Carter’s “Gypsy,” a tune originally released on 1979’s Parade with Chick Corea (piano), Tony Williams (drums), and Joe Henderson (tenor sax). After a newly constructed preface, Carter reprises a walking bass line that calls to mind the original—though this version is at a slightly more relaxed tempo. Less frenetic and in ways steadier and more self-assured, this one retains the original’s probing, prodding, and exploratory nature. If Parade’s was a showcase for Henderson, Skyline’s version is a showcase for Rubalcaba, as he plays both Joe Henderson’s lead lines and Chick Corea’s comping lines. The latter third of the tune spotlights DeJohnette and, secondarily, Carter—before Rubalcaba returns for one last lightning run. It closes with a sparse, contemplative dialogue that hits like a deep, awakening stretch—the musical manifestation of end-stage savasana.

Hypnotic and wistfully circular, “A Quiet Place” is the other contribution from Carter’s seemingly infinite catalog. It holds special meaning because DeJohnette also played on the first incarnation, from 1978’s A Song for You. But perhaps more meaningfully, this one speaks to the risks Rubalcaba—who’s always had the insane facility to play at breakneck speeds—took to develop as both a player and composer. “I put myself in contact with different spaces and musical visions,” he tells Panken in the liners. “Even where you are not totally comfortable with [different] ideas, you can always learn. Life is a palette with many tastes and flavors and colors and moments.” Carter’s playing makes the visceral richness of this piece possible; his framing allows Rubalcaba to plumb not just depths of feeling but also to communicate the kind of breadth of emotion that separates really good art from everything else.

The first of DeJohnette’s offerings is “Silver Hollow,” a tune the drummer recorded first in 1978 with his New Directions group, then 13 years later, with Rubalcaba, on the latter’s The Blessing. Deliberate and inherently narrative, this one tells a story, but that story’s construction is left to the imagination of the listener—almost as if the musicians leave it to you to choose your own noirish adventure. Then there’s “Ahmad the Terrible,” inspired by DeJohnette’s formative years in Chicago, when, as a young gigging pianist—that’s right, Rubalcaba isn’t the only multi-instrumentalist here—he learned by watching Ahmad Jamal at his fabled Second City haunts. Presented almost scenically, like a theatrical number, this one displays the combination packages—the sweetness and muscly melodicism, the tension and release, the insouciance and the sober weightiness—for which Jamal is so beloved.

Rubalcaba sources his original offerings from a pair of his ’90s releases for Blue Note. “Promenade” is the first, most appropriate selection that originally appeared on 1998’s Inner Voyage as a dedication to Ron Carter. No doubt the hope was that one day, Carter himself would be able to play this one. That day has come, and the result proves worth the wait. Rubalcaba and DeJohnette both take turns out front, but, mostly here, they accompany Carter, whose ideas are many, never superfluous, and always expressed with an elegant authority that need not be explicitly stated. With “Siempre Maria,” Skyline’s penultimate tune, Rubalcaba presents a comprehensive harmonic and structural overhaul of the ballad/bolero that originally appeared on 1992’s Suite 4 Y 20. It’s both meandering and focused, as though Rubalcaba and co. are hard at work at deciphering that foundational Latin American mystery, amor.

Two Cuban standards occupy coveted slots; “Lágrimas Negras,” a bolero from the ’20s, opens the album, and “Novia Mia” sits square in the middle of Skyline’s nine tracks. On the former, Carter hops out front early, soloing with a series of playful, referential riffs, which includes a memorable nod to Grieg’s “In the Hall of the Mountain King.” On the latter, Rubalcaba bears his soul, with a capacious solo rendition of this iconic Cuban ballad that lends credence to the old cliché that the space between notes can communicate just as much as the notes themselves.

The bluesy closer, “RonJackRuba,” testifies to the notion that it takes a little luck to make a great record. This one’s the product of a spontaneous collective improvisation that the trio didn’t even know was being recorded. The engineer Jim Anderson had left the room to tend to a tech issue but had the good sense to keep the tape rolling. “One of us played a note, and then we followed that sound, that line, and continued playing for seven minutes,” recalled Rubalcaba. “We didn’t know Jim was recording until we stopped and he told us.”

Over nine tracks presented, what Panken astutely dubs, “an equilateral triangle aesthetic,” a fusion of distinct personalities and sensibilities from three master musicians who know when to speak and when to listen. Skyline, he says, continuing to unspool this thread, is “an immersive album that is unique in Rubalcaba’s discography for its unendingly dialogical quality, in which no topic, idea or motif is off-limits to the kinetic, soulful investigation.”