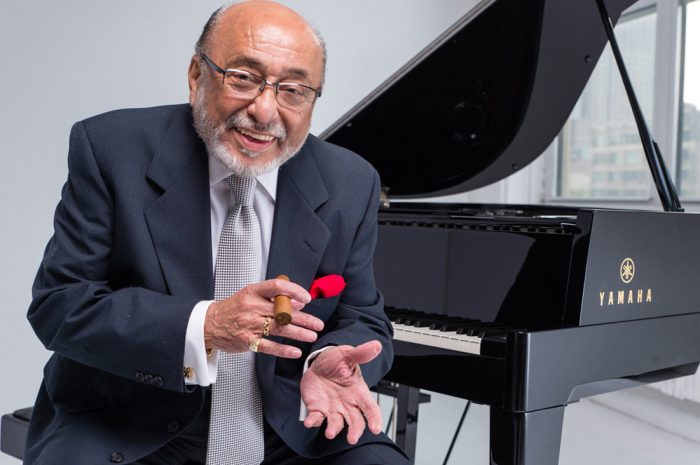 Lehman Center for the Performing Arts is proud to present the opening concert of the 2019-2020 season CELEBRATING 40 YEARS OF EXCELLENCE with a spectacular evening featuring TWO PIANO LEGENDS: EDDIE PALMIERI with his AFRO CARIBBEAN ORCHESTRA and also the MICHEL CAMILO TRIO on Saturday, September 21st, 2019 at 8 pm. EDDIE PALMIERI and his AFRO CARIBBEAN ORCHESTRA featuring vocalist HERMÁN OLIVERA will present a unique program of classic salsa. MICHEL CAMILO will perform with DAFNIS PRIETO and LINCOLN GOINES for a dynamic performance as the MICHEL CAMILO TRIO.
This concert is the first presentation of Lehman Center for the Performing Arts 2019-2020 Spectacular Season, and it is also the first performance in the newly renovated, 2,278 spacious seat concert hall, with a redesigned entrance, lobby, and accessible elevator balcony. Lehman Center is one of New York’s top nonprofit performing arts centers and the Bronx’s most extensive entertainment venue serving over 200,000 audience members each season.

Eva Bornstein, who is beginning her fifteenth season as Executive Director of Lehman Center, says, “During this milestone year, Lehman Center proudly welcomes audiences and community members to the top entertainment destination in the Bronx, which is now better than ever. The improvements that have been made will help ensure the comfort and convenience of all who attend our world-class performances and events. Funding for the 15.4-million-dollar renovation was in part provided by the Office of the Governor, the New York State Legislature, the Bronx Delegation of the New York City Council, and the Office of the Bronx Borough President.

Additionally, we will continue our “Take Your Seat” fundraising campaign, which will give you a chance to be a part of Lehman’s history by purchasing a tax-deductible seat(s) in your name or a loved one.”
Lehman Center for the Performing Arts is on the campus of Lehman College/CUNY at 250 Bedford Park Boulevard West, Bronx, NY 10468.  Tickets for EDDIE PALMIERI &
MICHEL CAMILO on Saturday, September 21st, 2019 at 8 pm are $65, $60, $50, $45, and can be purchased by calling the Lehman Center box office at 718-960-8833 (Monday through Friday, 10am–5pm, and beginning at 4pm on the day of the concert), or through online access at www.LehmanCenter.org.
Lehman Center is accessible by #4 or D train to Bedford Park Blvd. and is off the Saw Mill River Parkway and the Major Deegan Expressway. Low-cost on-site parking available for $5.00.
EDDIE PALMIERI, known for his charismatic power and bold, innovative drive, has a musical career that spans over 50 years as a pianist, composer, and bandleader of Salsa and Latin jazz orchestras. The Honorary Doctor of Music from Berklee College of Music has been awarded ten Grammy ® Awards and was honored with the 2013 National Endowment for the Arts Jazz Masters Award. His recordings have become classics with such hits as “Muñeca,” “Vamonos Pa’l Monte,” “Puerto Rico,” and “Azucar Pa’ Ti” which has been included in the National Recording Registry of the Library of Congress. Born in Spanish Harlem, he started piano studies at an early age and began his career as a pianist in the ‘50s with Eddie Forrester’s Orchestra. He spent a year with Tito Rodriguez before forming the legendary Conjunto La Perfecta in 1961. With an infectious sound, Palmieri’s band soon joined the ranks of Machito, Tito Puente, Tito Rodriguez and other leading orchestras of the day. His discography includes over 36 titles, of which ten have received Grammy Awards, including Best Latin Album for The Sun of Latin Music (1975), Unfinished Masterpiece (1976), Palo Pa’ Rumba (1984), Solito (1985) and La Verdad (1987). He received both a Grammy and a Latin Grammy award for Obra Maestra/Masterpiece (2000) with Tito Puente, the Best Latin Jazz Album Grammy Awards for Listen Here! (2006), and Simpatico (2007), a collaborative effort with trumpet master Brian Lynch. His April 2017 album Sabiduria/Wisdom, a fusion of jazz, funk, and Latin with Afro-world rhythms, had its World Premiere at Lehman Center for the Performing Arts in 2013. Also, in 2013, Palmieri was honored with the NEA Jazz Master Award and the Latin Academy of Recording Arts & Sciences’ Lifetime Achievement Award. In 2015, he released a new big band version of his classic composition Vámonos P’al Monte, along with the first-ever studio recording of another popular Palmieri original Pa’ La Ocha Tambo. Palmieri continues to innovate, releasing the Full album Full Circle in July 2018, that contains fresh renditions of eight classic salsa tracks featuring a stunning group of guest musicians including Brian Lynch, Conrad Herwig, “Little” Johnny Rivera, and Luques Curtis. In December 2018, Eddie Palmieri released his second album of 2018, Mi Luz Mayor, which features special guest artists Gilberto Santa Rosa, Hermán Olivera, and Carlos Santana. The album, which took four years to complete, is dedicated to Palmieri’s late wife Iraida and contains new recordings of the songs that they enjoyed together.
MICHEL CAMILO is a pianist and composer that flavors his tunes with the spice of Caribbean rhythms and jazz harmonies that bridge the genres of jazz, classical, accessible, and world music. Born in the Dominican Republic, Camilo studied for 13 years at the National Conservatory, earning a Professorship in Music degree. At age 16 he joined the Dominican Republic’s National Symphony Orchestra. Moving to New York City in 1979, he studied at Mannes College and the Juilliard School. Camilo’s major break came in 1983 when he substituted for Tito Puente’s pianist at the Montreal Jazz Festival. Based on that performance, he was able to join Paquito D’Rivera’s band, recording two albums and touring internationally over the next four years. One of Camilo’s early tunes, “Why Not?”, became a 1983 Grammy Award-winning hit for Manhattan Transfer. 1988 marked the release of his self-titled 4th album and the first on a major record label (Sony). That album, Michel Camilo, became an instant success and held the top jazz album spot for ten weeks. His next two releases, On Fire (1989), and On the Other Hand (1990) also hit the number one position in radio airplay. Camilo has performed with the biggest stars of both jazz and Latin music, including Eddie Palmieri, Dizzy Gillespie (who has added Camilo’s composition “Caribe” to his repertoire), Herbie Hancock, Mongo Santamaria, Joe Lovano, Gonzalo Rubalcaba, and Chucho Valdés. He served two years as Jazz Creative Director Chair of the Detroit Symphony Orchestra and a five-year tenure as Musical Director of the Heineken Jazz Festival (Dominican Republic). He has been awarded an honorary Doctorate by the Berklee College of Music, where he also holds a Visiting Professorship. Since Camilo’s 1985 Carnegie Hall debut he has become a prominent figure at festivals throughout the world and has been honored with numerous awards including a Grammy Award, four Latin Grammy’s, multiple Grammy and Latin Grammy nominations, an Emmy (for the Goodwill Games Theme song), and many international awards, the latest being this year’s Klavier Festival Ruhr Award from the most crucial piano festival in Germany. June 2019 marked the release of his 25th album, Essence, a dynamic big band album stacked with Camilo classics.
LEHMAN CENTER FOR THE PERFORMING ARTS
250 Bedford Park Boulevard
The Bronx, NY 10468
BOX OFFICE
718-960-8833
Monday-Friday
10:00 AM – 5:00 PM