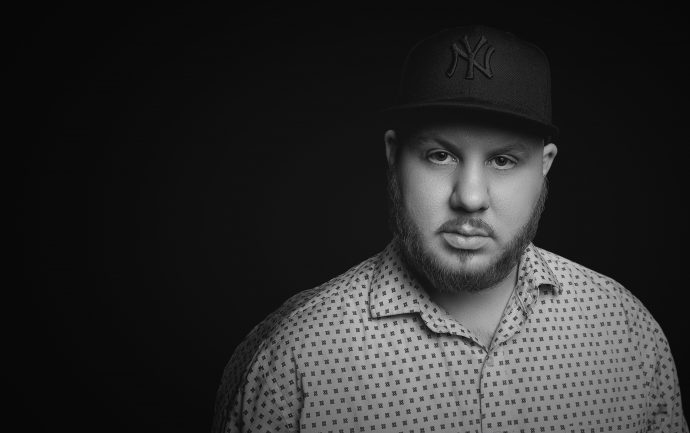 Nearly 100 years after the Harlem Renaissance shook the world, there’s a whole new cultural and spiritual awakening in that corner of the jazz world. Organized by post-bop pianist Marc Cary, The Harlem Sessions (originating at Gin Fizz and now based at Smoke Jazz Club) invites musicians, poets, artists, philosophers, and dancers to build and explore a new common repertoire with original ensemble arrangements. A key player in galvanizing this fresh and dynamic sense of cultural awareness, drummer/composer Curtis Nowosad was on hand anchoring the groove every week during the gathering’s first years – and he’s still part of the action today.

Having made his home in Harlem since 2013 when he was working on his masters at the Manhattan School of Music, the 31-year-old Canadian native emerges as a powerful musical force for social justice on the groundbreaking self-titled jazz and blues-driven collection that illuminates past and present American history while creating some profound history of its own.

While it may seem curious to some that Curtis would self-title his third overall album, it’s reflective of a desire to share his deeper core identity. He imparts his truth and the issues that have long mattered to him via five impactful originals and edgy, intensely rendered versions of three thematically related pieces: Gil Scott-Heron’s “Home is Where the Hatred Is,” Skip James’ “Hard Time Killing Floor Blues” and Nina Simone’s “See Line Woman.” Co-produced with Cary, it’s also the drummer’s first collection to feature the explosive and intuitive chemistry of his NY-based ensemble that has held court in NYC everywhere from Smalls, Fat Cat and Rockwood Music Hall to The Jazz Standard and full week residencies at Dizzy’s Club at Jazz at Lincoln Center.

Curtis laid the foundation for this current release with two previous critically acclaimed collections, his debut The Skeptic & the Cynic (which spent two weeks at #1 on the Canadian Jazz charts and featured Grammy-nominated pianist Taylor Eigsti) and the WCMA-winning and JUNO-nominated Dialectics (Cellar Live), which made DownBeat Magazine’s “Best of 2015” list, reached #3 on the CMJ jazz charts and spent ten weeks on the JazzWeek charts. The Skeptic & the Cynic was comprised mostly of cover songs by Michael Jackson, Bob Marley, Joni Mitchell, Pink Floyd, Black Star, and 2Pac, along with two originals. Recorded in Winnipeg in 2014 after Curtis’ first year at Manhattan School of Music, Dialectics featured mostly original music along with arrangements of compositions by Thelonious Monk, Wayne Shorter and the jazz standard “I Remember You.”

“I recorded my first two albums in my hometown of Winnipeg,” Curtis says, “with a band made up of my former teachers from the University of Manitoba. Those works were geared towards my growth as a musician and gaining a deeper knowledge of jazz. Stylistically, the new one is definitely a departure from those, yet is a much better reflection of who I am and the themes and issues that matter to me. It’s more important to me than just, ‘here are some new songs.’ These social issues were always simmering in my mind, and I was very vocal about them among the people I know and love, but it took a while before I was able to convey my feelings musically.

“It’s safe to say I’ve lived a lot of life between the release of Dialectics and now,” he adds. “I’ve gained a great deal of life and musical experience and been through a lot, so it felt appropriate to self-title the album. The music is very personal to me. I have gained a lot of insight living in Harlem for the past 5 1/2 years, and as a European-descended practitioner of Black American Music, I feel it is my duty to approach this music and these themes in a respectful, earnest and serious manner. I also feel that as I have made the transition from being an ‘outsider looking in’ (being from Canada) to an ‘insider looking out,’ so to speak, I have a unique perspective that I have chosen to express with this album.” Understanding the world from Curtis’ perspective will no doubt prompt listeners not only to enjoy some of the most inventive, hard-hitting jazz they’ve heard in a long time but also to start Googling and brushing up on their social history. Four of his five originals are devoted to activists who gave their lives or livelihoods to the struggle for a better planet.

The dreamy and mystical, then percussively busier and bustling “The Water Protectors” is dedicated to the Standing Rock Sioux and all other indigenous people in the U.S., Canada and worldwide who are fighting for their rights to exist without encroachment. Ranging from lilting and simmering gospel to fiery bebop to an electric piano, organ and affected saxophone jam, “Never Forget What They Did to Fred Hampton” reflects both the forward-thinking, socially conscious vision and the violent chaos that beset the Black Panther movement. Curtis composed the track on the anniversary of the FBI’s assassination of Hampton, one of the movement’s young, charismatic leaders who was head of the Chicago Chapter of the Party when he was gunned down in December 1969, at the age of 21. “His murder must be remembered and understood as we celebrate his message and vision of a brighter future for African Americans and all people devoted to justice and solidarity,” the drummer says.

The emotional, deeply soulful ballad “Song 4 Marielle Franco” is dedicated to Brazilian politician Marielle Franco, who was the leading voice in her country against police brutality and corruption before her assassination in March 2018. “Blues 4 Colin K” is a lively, high energy blues romp with a hypnotic soul transporting melody designed to shed light on former San Francisco 49ers quarterback Colin Kaepernick, who like Muhammad Ali fifty years before him, was robbed of his best years of competing for taking a stand (via taking a knee during the national anthem) against injustice and the oppression of Black people. Curtis balances the heavy themes with a personal statement of a different kind, the romantic and whimsical “Waltz 4 Meg,” dedicated to his wife Megan, whom he has known for over half his life.

Curtis, who started playing drums at 12 and picked up piano at 16, grew up in Winnipeg, the son of a piano teacher mother and saxophonist father. While he grew up hearing jazz around the house, Curtis opted instead for bands like Led Zeppelin and Black Sabbath. Yet his mindset shifted quickly from hard rock to jazz when he heard Art Blakey & The Jazz Messengers, particularly their 1963 album Caravan. “I liked John Coltrane and Ornette Coleman and started learning with records I checked out of the public library,” he says. “But there was something about Blakey being a thunderous drummer and bandleader that tapped into my spirit and made me realize I wanted to be that kind of musician as well. Why jazz? Its sense of freedom just spoke to me, and I think that’s what attracts a lot of people. There are no limits. I was also fortunate to have the opportunity to interact with a lot of New York musicians when I was in high school and college, and that played a large part as well.”

Establishing himself on the NY jazz scene, Curtis has played in the bands of Philip Harper, Craig Harris, rising star saxophonist Braxton Cook and renowned pianist Marc Cary (who both make major contributions to the album) while headlining major jazz festivals in Canada and several in the U.S. He has also performed with four NEA Jazz Masters: Candido Camero, Dave Liebman, Jimmy Owens, and Kenny Barron. A recipient of several awards and scholarships, in 2014 Nowosad performed at the Bimhuis in Amsterdam as a winner of the Keep an Eye Jazz Award. He was twice selected to participate in Betty Carter’s Jazz Ahead at the Kennedy Center in Washington, DC and also attended the Banff Jazz Workshop. Curtis is an alumnus of the University of Manitoba, where he studied with Terreon Gully and Quincy Davis, and holds a master’s degree from Manhattan School of Music, where he was a student of John Riley, and performed with the multi-Grammy nominated MSM Afro-Cuban Jazz Orchestra, under the direction of Bobby Sanabria. He currently serves on MSM’s Precollege jazz faculty and is an endorser of Canopus Drums.

“From a purely musical standpoint, this album was creatively fulfilling because it was the first time that I had handled all of the audio editing myself, which was quite a task because there are so many layers, from horns to vocals to electronic sounds,” Curtis says. “It was a challenge to figure out how to bring the right people into unique configurations for each song so that we could best bring their artistry to life, and we were still adding guests a week before the recording session. It was going to be a purely instrumental project until Marc and I talked about adding vocals – which led us to bring the incomparable Michael Mayo and Brianna Thomas on board.

“Thematically, my feeling is that if we never deal with history we will never know how to grow and move forward as a society” he adds. “One of the problems in the U.S, Canada, and many other countries is that we don’t do nearly enough to understand that history and take the necessary steps toward dismantling systems of oppression. Jazz has always inherently reflected the times it’s created in, but often when it’s institutionalized in colleges and university programs, we tend to focus on jazz history alone as opposed to the American and world history it emerges from. I hope this project will inspire listeners to read up on the different icons I was inspired to write about, and open their eyes and ears to not only what was going on in previous generations but also today. By better understanding those important connections, we can collectively begin to question all the societal structures around us.”