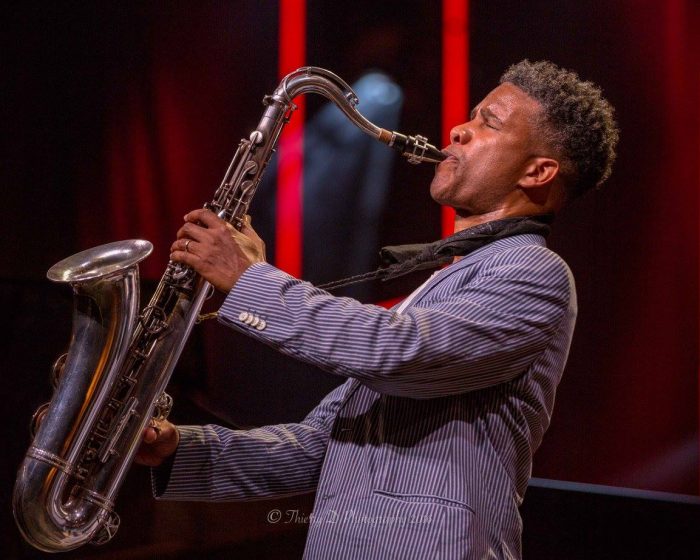 It’s been roughly a decade since the Puerto Rican saxophonist DAVID SANCHEZ appeared on a New York stage or released an album. So, when I heard that he was making a rare New York appearance and celebrating the release of CARIB (Ropeadope/Stretch Music) I made a beeline to THE JAZZ STANDARD. Suffice it to say, I was not disappointed.

Essentially, CARIB is a continuation of the “river” that began with Sanchez’s debut album, The Departure (1994) and Melaza (2000), where he drew heavily from Puerto Rican Bomba and Plena. CARIB draws inspiration from the music and rhythms of Puerto Rico and Haiti, who according to Sanchez, share striking similarities. Also, it pays tribute to the Afro-descendant communities that shaped Sanchez’s music and his father, Dimas, and wife, Karla who recently transitioned. It was she who insisted Sanchez visit Haiti and experience the music and the culture first-hand. “I feel like this recording wouldn’t have been possible without her wisdom, sensibility, and love,” wrote David in the album’s liner notes.

Sanchez is known for his muscular sound but on this evening his sound was more paced, measured, sweet, joyful, and at times, sad. Tunes such as Canto and Fernando’s Theme wrenched the heart while Madrigal and Land of the Hills were more festive, celebratory.

Overall, the performance was impressive but for Sanchez, it must have been a triumph to return to the city where he once lived, worked, and earned his bones. On a larger scale, the performance (and the album) demonstrate triumph over loss and the courage to press on and evolve as an artist, despite the circumstances. Between sets, I spoke with Sanchez briefly. During the course of our conversation, we touched on the death of his father and wife and he said, “You just have to keep going.”

CARIB is the first in a series of recordings that explores and pays homage to Afro-descendant musical traditions throughout the Americas. If Carib is an indication of what’s to come, listeners are in for a treat. CARIB is available on all digital platforms.