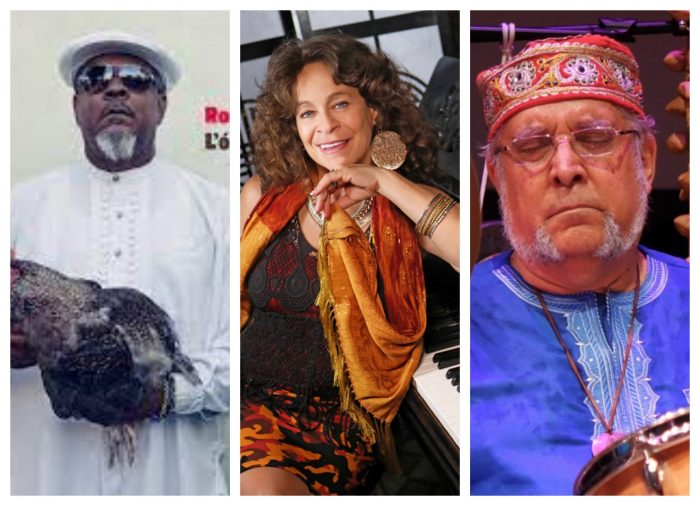 On December 18, the event will be broadcast on Cuban national television (and beyond) as part of a 2-night event (Dec 18/19) through the HotHouseGlobal streaming platforms on Twitch, YouTube, HotHouse’s website, and Facebook Live.

A recipient of the prestigious Southarts Jazz Road Creative Residency grant, Rosewoman has created a night that gives broader space and voice to the inspirations and traditions that have shaped and nurtured her. “With New Yor-Uba, we pay homage to the journey of centuries-old Yoruba traditions from Nigeria through Cuba to present-day New York, reflecting its contemporary manifestations,” says Rosewoman.

The New York Times has described her music as “two big cultural streams flowing simultaneously…ancient and experimental at the same time, and capacious enough to include more and more.”

A Function at the Junction: Ancestral Bridge, Musical Streams is made possible with the support of Jazz Road, a national initiative of South Arts, which the Doris Duke Charitable Foundation funds with additional support from The Andrew W. Mellon Foundation.

Rosewoman shares her vision:
As part of a unique community of musicians in NYC with deep ties to spiritually-based Cuban folkloric traditions and contemporary jazz, Ms. Rosewoman, Román Díaz, and Francisco Mora Catlett share conceptual, artistic, and spiritual intersections. Ms. Rosewoman sees this residency as an opportunity to “incorporate and stage the work of treasured co-creators who also highlight these traditions in unique contemporary contexts while building bridges between artists and cultural voices based in N.Y. and also those artificially separated by Cuba/U.S. policies.”

Master folklorist Román Díaz, a member of all three ensembles (leader of one) and a former member of Yoruba Andabo (Cuba), has been a featured and foundational member of her New Yor-Uba ensemble since 2008. Fulfilling a desire to further share her music (deeply informed by traditions born of Cuba) with Cuban audiences through her partnership with HotHouseGlobal, especially gratifying for Ms.Rosewoman is that Mr. Diaz is featured in all three ensembles.

“This project enables us to share Mr. Díaz with the Cuban communities he is born of but separated from, as they experience his impact on the jazz community here in the U.S.,” says Rosewoman. “And by ‘taking’ this music to Cuba, we all return to the source and pay homage to the roots of our inspiration, nurturing this junction.”

ABOUT NEW YOR-UBA
An NEA performance grant facilitated the 1983 debut of New Yor-Uba: A Musical Celebration of Cuba in America featuring master folklorist Orlando ‘Puntilla’ Rios at NYC’s Public Theater. For 38 years, New Yor-Uba has been a forum for collaboration between masters from the worlds of contemporary jazz and Cuban folkloric music. The concept and sound remain uniquely vital as Rosewoman continues to enhance the ensemble’s repertoire with new music and personnel, further inspiring her to reflect upon and explore the organic links between these deep musical traditions. The ensemble has released two acclaimed albums, a self-titled double L.P. (2013, NPR’s #1 Latin Jazz recording of the year) and Hallowed (2019, NPR’s #3 Latin Jazz recording).

AFRO HORN is an avant-garde ensemble that highlights the African presence in the Americas through an assemblage of prime musicians and a repertoire of written and improvised jazz expressions and Cuban folkloric influences. Mr. Mora has performed and recorded with Sun Ra, Max Roach, Detroit greats including Marcus Belgrave, Kent Cox, and Carl Craig and is co-founder of the Oyu Oro Afro-Cuban Experimental Dance Company (2000) with his wife Danys “La Mora” Perez Prades, performing dance and music from the African Diaspora.

ROMÁN DÍAZ is a scholar of religious and folkloric music, composer & performer of folklore, and contemporary jazz. Considered both a pillar of the New York City jazz avant-garde and one of Afro Cuban music’s great innovators, his Rumba Ensemble displays his vision of the confluence of New York City’s tradition of music of the African diaspora. He has performed and recorded with Merceditas Valdes, Raices Profundas, Paquito D’Rivera, Michele Rosewoman, Henry Threadgill, David Virelles, Jane Bunnett, Juan Carlos Formell, Orlando “Puntilla” Rios, Oriente Lopez, Afro Horn& Danilo Perez among many others.

Additional Project and HotHouse Broadcast Events
A roundtable conversation to be produced and hosted by HABANA/HARLEM™ wherein ensemble leaders and noted scholars and artists steeped in the African religious, cultural expressions will explore the junctions of Cuban cultural traditions in the diaspora and their impact on U.S.-based musicians. Participants will include Frank Bell, Ivor Miller, Michele Rosewoman, Román Díaz, and Francisco Mora Catlett (date to be announced).

Partnering Organizations and Collaborators
Arts for Art is dedicated to the exceptional creativity in the African American multi-arts jazz culture that utilizes improvisation to express a larger, more positive dream of inclusion and freedom. We work to preserve the legacy of FreeJazz through multi-arts programming, supporting the legends, mid-career and young artists. We ensure a vital future for the improvised arts by offering music education and mentoring programs to those in need.

HotHouse: The Center for International Performance & Exhibition dba HotHouse is a 34 -year old non-profit arts presenter in Chicago with a mission to instigate, produce and otherwise facilitate participatory multi-disciplinary events that create opportunities for high caliber artistic practices; that extend their collective resources into underserved communities and foster the international exchange of ideas and methods within the context of progressive social change praxis. HotHouseGlobal was created in 2020 to serve artists during the pandemic. The HotHouseGlobal channel facilitates a variety of multi-arts and community-based content and a worldwide network in the social justice and cultural sector.

Panel participants:
Scholar and Educator Ivor Miller is a Research Affiliate at the African Studies Center at Boston University who specializes in the cultural history of the Cross River region of southeastern Nigeria and southwestern Cameroon, and its impact in the Caribbean and the Americas through the trans-Atlantic slave trade.

Frank Bell has been an educator and seasoned 0riate in the Cuban Lukumi tradition for over 26 years. Mr. Bell brings a wealth of knowledge of song tradition from the Afro-Cuban belief system and the divination systems integral to the tradition. Mr. Bell is also a Batá drummer and a performer of the dance traditions of Cuba’s varied African-based belief systems. Mr. Bell will also serve as emcee and moderator for a post-concert Q&A with ensemble leaders and the audience.