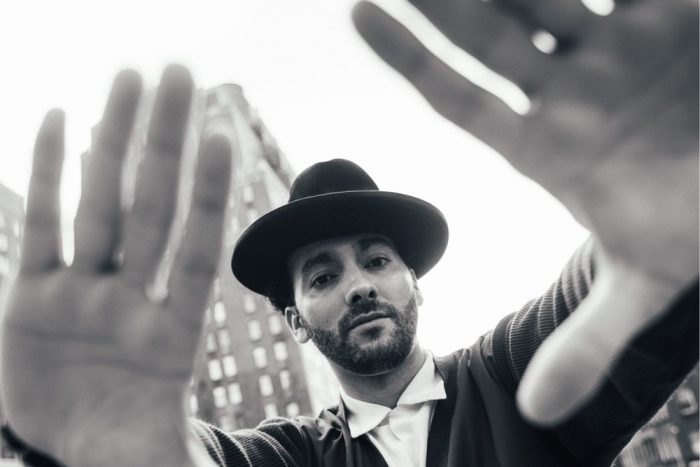 Born and raised in Cuba, pianist and composer David Virelles grew up in a musical environment. His father was a renowned singer, songwriter, and his mother was a flutist in the Santiago de Cuba Symphony. Virelles studied classical music at seven and discovered his grandfather’s jazz collection.

In 2001, he relocated to Canada as a protégé of Canadian musician Jane Bunnett, with whom he toured and recorded several Grammy-nominated) albums with.

In 2003, Virelles became the first recipient of the Oscar Peterson Prize. His debut album titled “Motion” was released in 2007 on the record label Justin Time. Virelles also received the Grand Prix de Jazz Award at the Montréal Jazz Festival.

Virelles’s album “Continuum” featured bassist Ben Street, legendary drummer Andrew Cyrille, and percussionist Román Díaz garnered worldwide critical success and was selected as one of the best recordings of the year by the New York Times in 2012.

Tomas Peña: Your previous recording titled Continuum drew from visual art, Afro-Cuban folklore, religion, poetry, and magic. Mbókò draws from the Carabalí culture and the Abakuá society. Does Mbókò pick up where Continuum left off?

David Virelles: Yes, Mbókòis a continuation of Continuum, originally intended to be an Abakuá project, but it’s more explicit.

TP: What drew you to the subject?

DV: I’ve always been interested in the ritual aspect of music. Also, I felt the need to reassess things from a musical standpoint, so I dug deep into what I’m interested in, which led me to that. What drew me to the subject was my interest in culture. Also, when I arrived in New York (2009), I met Henry Threadgill, Milford Graves, Andrew Cyrille, Muhal Richard Abrams, and Román Díaz, who I consider to be the creators of music of this nature. Having access to people that have an interest in this musical direction has been very important.

TP: Did not being an “insider” pose problems for you in terms of accessing information?

DV: I’m interested in the relationship between the ritual and the metaphysical aspects of music and how it affects people’s psyche and consciousness. I don’t feel I have to be a participant to tap into that. I’m learning about a vast culture with a vast history, which is very inspiring. I’m not trying to recreate Abakuá music. I’m observing how the elements behave and interact within the culture. I’m analyzing how that works to bring it to my music’s context. Painter Wifredo Lam, composers Amadeo Roldán and Alejandro García Caturla, and author and musicologist Alejo Carpentier are models for me because they incorporated (Afro-Cuban) elements into their work. Yet, they never lost sight of their vision. Roldán and Caturla were not recreating folkloric music or chants; they were making original art from different traditions. They acknowledge the folkloric presence in their work.

TP: The word, Mbókò has several meanings: “fundament,” “sugar cane,” and “the voice.” Which meaning resonates with you?

DV: The Divine Voice and Fundament (Foundation). It also represents a quest for higher consciousness.

TP: How does the term “sacred” apply to this project?

DV: The music is sacred because of its function and intent and because of what is being explored, the history and tradition of the material. There’s a long and storied lineage of sacred music, from Bach to Duke Ellington to John and Alice Coltrane. In Cuba, we have a so-called classical sacred tradition alongside the folkloric. For example, musician and composer Esteban Salas wrote music for the church and the liturgy. One could say his musical aesthetic came out of Europe, but being Cuban sets him apart. So, he’s also a model, someone making music with that function. I’m inspired by the concept and direction of his music. With Mbókò, the main inspiration was folklore, Abakuá specifically. I consider the program in the album to have a sacred aspiration because of the function of the biankoméko orchestra, which isn’t used much outside the ritual context. When you have someone like Román Díaz playing the drums, I consider anything he plays sacred because he’s dealing with a particular language from that environment.

TP: You describe Román Diaz as “the soul” of the project.

DV: Yes, because of what he brings musically and culturally. He’s also a titleholder in the Abakuá tradition, a specialist of the largest drum in the four-drum biankoméko kit, the improvising bonkó enchemiyá, and its language. Román is a master percussionist and a carrier of the culture.

TP: I admire Román’s adventurous nature and how he draws inspiration from disparate sources and incorporates it into his work. For someone of his stature, he is unique.

DV: He’s been doing that since his early days. Check out some of the stuff he did with Yoruba Andabo, and you’ll see he was already there. When he came to New York, he met people from different lineages. He’s incorporating that into other things abstract from his background, things that might not be directly related, but he makes them come together. Improvised music in the U.S. has a shared history with Cuba. Román understands the relationship and develops both, bringing those elements together uniquely.

TP: You and Román have developed a “language” of your own.

DV: It’s essential to develop a rapport. The musicians that participate in Mbókò and Continuum are people I developed relationships with, and the projects grew out of that. For example, before Román came to the Continuum project, I played trio gigs with Ben Street and Andrew Cyrille. When I brought Román in, he fit perfectly. It’s the same with this project. I’ve played with Thomas Morgan and Robert Hurst on different projects. So, the projects I’ve done are an extension of the relationships I’ve developed over the years and a snapshot of the relationships at a particular time.

TP: Tell me about the band and the configuration.

DV: I knew I wanted to have the biankoméko because I love the sound and the rhythms. Many people are curious about why I chose two basses. I wanted to work with Thomas and Robert. There are two tracks where I ask the bassists to reflect on but not imitate, for example, the sound of the marímbula (a large, resonating wooden box with tuned metal keys). I had Robert play a foundational role on some tracks, and Thomas added counterpoint, texture, and color. Other times, it was the reverse. Marcus Gilmore has a very orchestral approach to playing the drums. I love his precision and how he deals with different rhythms and colors. We’ve played together in various situations. He comes from a family with a deep musical history; he is the grandson of one of the founding fathers of modern drumming, Roy Haynes.

TP: Let’s review the tracks. “Wind Rose” and “The Scribe” are conversations between the piano and the bonkó.

DV: The bonkó has a specific vocabulary. Different rhythms mean different things. For example, Román will play a phrase that has a specific meaning in the culture and brings out certain energies. Wind Rose opens the way for the rest of the album. “The Scribe” (Tratado de Mpegó) deals with the titleholder in the society and graphics (symbols) as sound. I was interested in exploring someone whose role is to create vibrations through graphics. Biankomékois the drum ensemble, which consists of four drums, a bell, and wooden sticks. The tune deals explicitly with the rhythms that come out of the ensemble. The piano figure also comes out of those rhythms, and the rhythmic vocabulary comes out of the tradition. It’s the one track that is the most literal in terms of Abakuá musical information.

DV: Supposedly there were two structures in the Cuban army, the military and a religious structure. Quintín Bandera was a spiritual leader. Cubans suffered many hardships. I would imagine they had to get into a spiritual zone to deal with the atrocities of war and what was happening in the country. Coming from Santiago de Cuba and being proud of my heritage, I wanted to acknowledge Quintín Bandera, who also hails from Santiago. You’ll notice the tune has an Oriente flavor.

(A reference to General José Quintín Bandera Betancourt (1846 – 1906), a military leader of the Cuban insurrection against the Spanish during the Cuban War of Independence. In 1906, Bandera, “himself almost a full-blooded Negro,” led an army of insurgents toward Havana and was killed near Punta Brava, a village close to Havana.)

TP: Seven, Through the Divination Horn, where the number seven (7), which played a prominent role in Continuum, resurfaces.

DV: This composition is related to several kinds of expression through the number. The composition contains musical phrases set up in groupings of three and four. Depending on the arrangement, the three or four might come in first, or the phrases repeat and weave in and out. Also, it opens with the ekón bell, which I wanted to feature.

TP: “Stories Waiting to be Told”

DV: That’s me thinking about how these traditions will move and evolve through time.

DV: That’s about the transmission of forces through musical instruments and sound. The Highest One– That’s a hard one to explain. The title concerns the highest form of vibration. Also, it alludes to other things, movies and soap operas from colonial Cuba in the 1800s and the writings of Lydia Cabrera. The tune is elusive.

TP: The recording closes with a tribute to Cuban vocalist, guitarist, and composer María Teresa Vera.

DV: She was important for many reasons. She brought Abakuá musical elements into the secular realm. She performed tunes with Abakuá lyrics (Ex: Los Cantares del Abakuá). The tune has the clave ñáñiga as an underlying rhythm, which I’m told Ignacio Piñeiro introduced to the music, with whom Vera had a working relationship.

TP: When Continuum was released, I was surprised that critics and listeners grasped the concept. I’m speculating that the spiritual and communal nature of the music drew people in and seduced them into listening to the recording from start to finish.

DV: Right. Listening to one track will not give you the complete picture.

TP: Also, unlike Continuum, where Roman guides the listener, here the drum does the “talking.”

DV: Yes, that distinction was intentional.

TP: Creatively and commercially speaking, the project is a bold move.

DV: (Laughs) My goal is to develop as a musician, and these projects I hope to push me in the direction I want to go in. I have no control over what the music will do once it gets out there; either people enjoy it or not. When Continuum came out, some people said: “When I first heard the recording, I didn’t know what you were doing. I was trying to figure out what you were trying to say.” Also, many people were taken aback because they thought it wasn’t as “pianistic” as it should be. People said, “It’s your recording, you’re the leader, you’re a piano player, and there’s not a lot of piano playing on the album.” However, I considered Continuum to be pianistic in dealing with the instrument from a sonic standpoint. Also, I was thinking about textures and structures and my function within the ensemble. I wasn’t thinking, “I am going to take a solo now.”

TP: The online publication All About Jazz sums the project up nicely, “Mbókò isn’t just an album that rewards repeat visits, it’s a recording that demands them. A single listen is enough to clarify something important going on here. Virelles and his talented group create an hour-long journey of deeply felt spirituality. Mbókò unveils far more with every spin.” 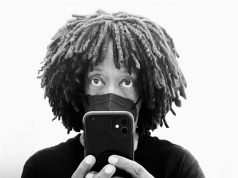 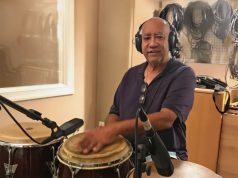