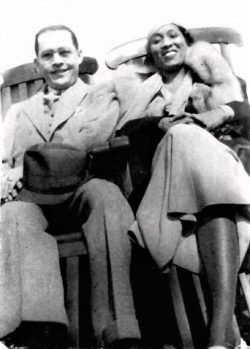 In the introduction to Juan Tizol – His Caravan Through Life and American Culture, author, Basilio Serrano makes no bones about why he decided to put pen to paper: “To set the record straight and give credit where credit is due.”

Serrano is a seasoned educator and historian who is all too familiar with the plight of Puerto Rican artists whose contributions to jazz have been unjustly ignored or forgotten. In 2000, he wrote several articles about Juan Tizol’s collaborations with Duke Ellington, Harry James, and other nationally known orchestras. Also, about Boricua Pioneers in Latin Jazz, Puerto Rican Musicians of the Harlem Renaissance, and essays about the pianist Noro Morales, the actress Miriam Colón and the political activist Lolita Lebrón.

During a recent conversation with Serrano, I asked him why he chose Juan Tizol as his main subject. “I chose Tizol because when he arrived in the U.S from Puerto Rico he spoke no English and was not familiar with American culture. Tizol knew little of jazz, and he played an unusual instrument – the valve trombone – which was mainly used in marching bands. Some would say Tizol had three strikes against him, if not four,” said Serrano, “yet despite the odds, he had an extremely successful life in music.”

Juan Tizol was born in Vega Baja, Puerto Rico where he grew up in a musical environment. His first instrument was the violin but, at an early age, he switched to the valve trombone. Mostly, he trained under his uncle and surrogate father, Manuel Tizol, the director of a municipal band, the San Juan Symphony, and local operas, ballets, and dance bands. Ironically, Tizol came to the U.S. as a stowaway on a ship traveling to Washington, D.C. in 1920. There, he set up residence and established himself in the pit band at the Howard Theater, who played mostly for touring shows and silent movies. Duke Ellington heard Tizol perform at the Howard Theater and in the late, 1920s when Ellington’s band was broadcasting from the Cotton Club in Harlem, he asked Tizol to bring his (valve) trombone to hear how it would sound with the band.

Tizol joined Ellington’s band in 1929 and composed, what he describes as “Spanish (exotic) melodies.” Songs like “Moonlight Fiesta,” Jubilesta,” “Caravan” and “Conga Brava” and injected Latin influences into Ellington’s repertoire. Also, as a senior and highly respected member of the orchestra, Tizol was responsible for rehearsing and integrating new musicians into the band. In his autobiography titled, “Music is My Mistress” (Da Capo Press, 1973) Ellington describes Tizol as “A tremendous asset to our band, a very big man, a very unselfish man and one of the finest musicians I’ve ever known.”

Lesser known is Tizol’s role as a racial trailblazer. During his tenure with Ellington’s orchestra, Tizol endured the indignity of being described as a “blob of sour crème in a black bowl of caviar.” Also, he adhered to “color codes” and black face for the films “Black and Tan” (1929) and “Check and Double Check” (the 1930s). The fact that Tizol made a conscious choice to work with black jazz orchestras, marry an African American woman (Rosebud Brown) and live in a mostly African-American community during a time when racial inequities were rampant speaks volumes about his character. When the Duke Ellington Orchestra toured the South and restaurants refused to serve bandmembers Tizol’s typical response was, “If you don’t serve them, you don’t serve me.” Ironically, Tizol’s detractors unjustly criticized him for “trying to pass for black.”

Tizol remained with Ellington until 1944. Afterward, he joined Harry James’s orchestra in order to be close to home (California). He returned to the Ellington orchestra in 1951 and reunited with Harry James three years later. In 1960, he spent one year with Ellington, and appeared on television with Frank Sinatra and Nat King Cole, before retiring.

In 1984, Tizol died of a heart attack at the Daniel Freeman Hospital in Inglewood, California. He was 84 years young.

Juan Tizol – His Caravan Through Life and American Culture, is an insightful and engaging read. Also, it demonstrates there was much more to the icon than meets the eye. Highly recommended!