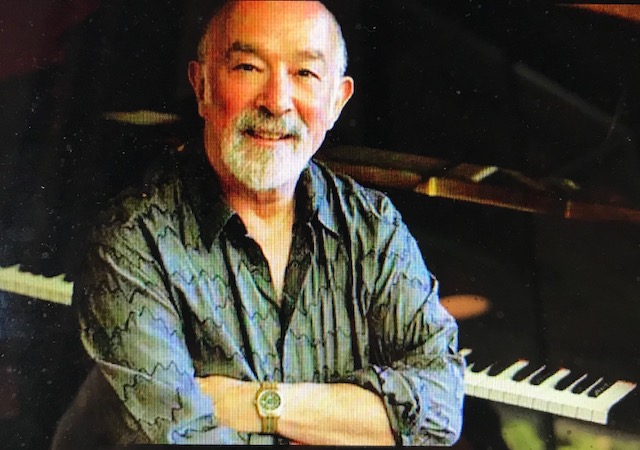 Pianist, composer, educator Mark Levine was a graduate of Boston University who began his career as a bebopper. His interest in Latin Jazz was generated by a visit to the world-famous Palladium Ballroom in New York City where he saw Tito Puente. Eventually, he moved to Los Angeles and honed his skills by playing with a variety of Latin bands. Over the years Mark performed with some of the most renowned names in jazz and Latin jazz: Willie Bobo, Mongo Santamaria, Cal Tjader, Tito Puente, Harold Land, Blue Mitchell, Joe Henderson, Stan Getz, Bobby Hutcherson, Carman McRae, Bobby Shew, and others. He distinguished himself as the leader of The Latin Tinge. In addition, he is the author of The Jazz Theory Book, The Jazz Piano Book, and the Drop a Book. Levine resided in the Bay area and taught World Music at the Jazz School Institute in Berkeley, California. Mark passed on January 27, 2022. He was a lovely man and a titan on the keyboard. Rest in Power, Mark Levine!

Tomas Pena: Congratulations on Off & On – The Music of Moacir Santos (Left Coast Clave Records). You seem to have struck a chord; the reviews are amazing!

Mark Levine: Thank you! I will be happy if Moacir’s music becomes better known. Maybe it will inspire Blue Note Records to release the recordings Moacir made in the 70s: Maestro (1972), Saudade (1974), and Carnival of the Spirits (1975).

TP: No doubt, aficionados would love to get their hands on the recordings, me included!

ML: E Bay and Amazon.com in Japan are good places to look. Oddly, a collector’s copy price fluctuates between $14.98 and 304.00! The albums have a mysterious way of disappearing and reappearing, but you can find them for a reasonable price if you look hard enough.

TP: You toured with Moacir and played an essential role in making (the album) Saudade.

ML: Yes, I worked with him and fell in love with his music. I rehearsed with Santos’s working group but only performed with him on one ill-fated tour. What we played was strikingly different. One casino manager called it “jungle music” and told us to go home halfway through the tour.

TP: Racism and ignorance rear their ugly heads! How did you meet Moacir?

ML: Through Luis Gasca, a Mexican-American trumpet player touring with Mongo Santamaria. Before that, I had never heard his music.

TP: For the benefit of readers who may not be familiar with Moacir Santos, explain who he was and why he is so significant.

ML: Moacir was a great Brazilian songwriter. Arguably the best one of all, with all due respect to Antonio Carlos Jobim and everybody else. But he wasn’t just about Bossa Nova and Samba. He grew up in Pernambuco in the country’s northeast region and was exposed to the backwoods area. He also traveled a lot, played with many bands in that area, and was exposed to music other than Bossa Nova and Samba, so he used a lot of rhythms unfamiliar to this country. Eventually, he moved to Rio and Sao Paulo, becoming a conductor and movie writer.

TP: I understand Moacir was also an educator.

ML: The list of those who studied with Moacir is a who’s who of Brazilian music: Sergio Mendes, Nare Leao, Flora Purim, Deodato, etc. Harmonically, he was way ahead of any other Brazilian songwriter. His music is strange in that it has nine-bar phrases and seven-bar phrases, and it wasn’t uncommon for him to superimpose one rhythm on top of another. He was a tremendous influence in general.

TP: What prompted Moacir to move to the U.S., and why, in your opinion, did fame elude him?

ML: When Moacir came to the U.S., it was the time of Sergio Mendes, Joao Gilberto, and other Brazilian musicians, many of who moved to Los Angeles. Aside from Moacir recording the Blue Note albums, everything else was wrong.

ML: Blue Note was seeking another Sergio Mendes and Brasil ’66. I don’t know if you’ve ever heard the first track from the album, Maestro, but it’s not commercial. There is a long monologue where Moacir talks about coming to the United States. It wasn’t what Blue Note was expecting. Regrettably, they sat on the recordings, and Moacir was stuck in the U.S.

ML: He did a couple of things in movies. Nothing memorable.

TP: In a 1996 interview, Moacir said he was a ghostwriter for a ghostwriter! The film, Final Justice is the only film he received credit for.

ML: There are still a lot of blanks in my knowledge about Moacir’s life. For example, people have sent me versions of recordings by Moacir I’ve not heard before. Every few days, I discover another version of the tune, Nana. There must be a hundred versions!

TP: Was Moacir revered in Brazil?

ML: He was well known in Brazil, but I don’t think he made much money. As far as being revered, I think that happened when Mario Adnet produced Ouro Negro (Black Gold) in 2004.

ML: They brought back some of the people from his early records and a lot of Brazilian superstars. It was a tribute to them and what they learned from Moacir. Wynton Marsalis was a featured guest.

TP: I understand Adventure Music was working on a documentary film about Moacir’s. Do you know if the film was completed?

ML: It’s possible. I know there is a lot of research going on in Brazil. There’s a guy in Brazil who is writing Moacir’s biography.

TP: Tell me about the making of Off & On and why you chose to pay tribute to Moacir at this juncture in your career.

ML: It was basically, “Gee, I should have done this before.” In a way, it’s better that I didn’t do it until now because I am more ready now than I was five years ago. You know The Latin Tinge’s recordings are all Afro-Cuban in orientation. But, I knew, as soon as Mike Spiro got a hold of the music, it would take a left turn and go to Havana! I was hoping that would happen, and it did. The music is a mixture of Brazilian and North American jazz, but rhythmically it’s Afro-Cuban.

TP: So, technically, it falls under the heading of World Music.

ML: This is a World Music project. The record has only been out a few weeks and is doing well on the World Jazz charts.

TP: Who are the band members?

TP: How did you select the material?

TP: Was the project a labor of love?

ML: It was a labor of love, and everyone was familiar with Moacir’s music. They discovered his music twenty years ago, and they were chafing at the bit to do it.

TP: Do you think it will spark a resurgence of Moacir’s music?

TP: If you don’t mind my asking, what was the complaint?

ML: He expected the music to be more Brazilian, but after he listened to it, he took it back! If I may put my teacher’s hat on for a moment, I teach World Music at Jazz School Institute in Berkley, California. My view of World Music is music that combines genres and works. There are commonalities between different genres, and clave is common between Brazilian and Cuban music. Clave rules Cuban music. Everything is in clave if you listen to almost any Brazilian record, though most Brazilian musicians will vehemently deny it! That said, they break some rules in the Cuban sense. All of a sudden, there might be an extra bar or one fewer bar, or the clave gets flipped around, which you are not supposed to do if you’re in Havana. Other than that, all the music is in clave, and the influences are all from the same part of Africa. To me, there are only a handful of people in the world who know how to do that. One is the guitarist, Nguyen Lee, and another is the composer, multi-instrumentalist Hermeto Pascoal. They can put it together because they understand the things they have in common. Of course, Moacir did it, and that’s what I’m trying to do.

TP: In hindsight, are you happy with the results? If it were possible, is there anything you would change?

ML: I feel wonderful about it, and the airplay and reviews have been very gratifying. Our last CD, Isla was also a labor of love. It was nominated for a Grammy.

TP: The nomination was well-deserved.

ML: I think of Off & On as a record that will be listened to years down the road, simply because it is the first North American tribute to Moacir’s music.

TP: It’s destined to become a classic! Thank you for speaking with me, Mark. Congratulation and long live the music of Moacir Santos!