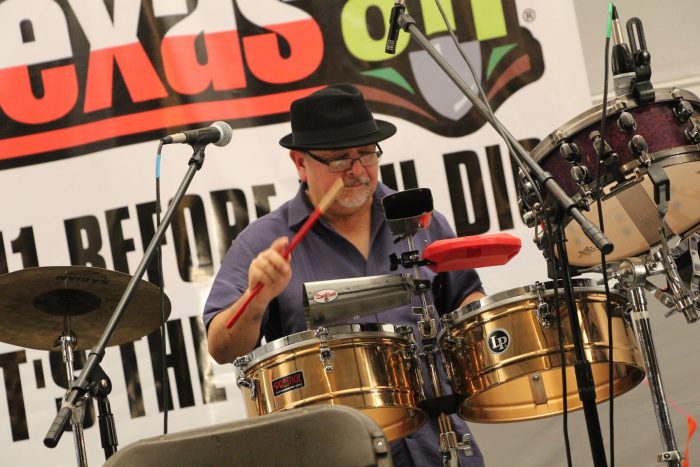 JDP: Congratulations on the release of Mambo Boulevard. Suffice it to say; listeners are in for a treat!

VR: Thank you for supporting our music. 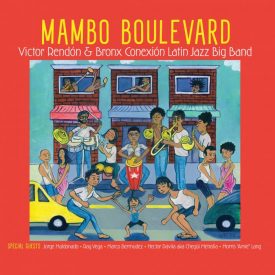 TP: The pleasure is mine! Before we dive into the album, tell me about the Bronx Conexion Latin Jazz Big Band. As I understand it, the ensemble started as a rehearsal band playing stock (standard) charts.

VR: When I was in college, I wanted to be a big band drummer. I saw the connection between the American big bands and the orchestras of Tito Puente and Machito. Of course, when I formed the big band in 2012, I didn’t have the repertoire I have now. I had arrangements by Buddy Rich, Count Basie, Thad Jones, and songs I composed for Lehman College. I started with that, but the band members began bringing in arrangements of their own, and very quickly, it took off! Within a year, I saw the potential, and it turned into an “official” band.

JDP: How critical was the residency at The Nuyorican Poets Cafe?

VR: It was major in terms of rehearsing, recording, and working out the material in front of a live audience. The tune, Chale, which appears on Mambo Boulevard went through six incarnations before I settled on the final version.

JDP: For the record, the residency was interrupted by the pandemic but it is ongoing. No doubt, you are looking forward to returning to the stage.

VR: I can’t wait! By the way, we share the residency with percussionist Wilson “Chembo” Corniel, who performs on alternate Wednesdays.

JDP: Good to know. In 2016, the Bronx Conexion Latin Jazz Big Band released the album, “True Flight,” which was well-received. Why the long gap between recordings?

VR: Time flies! The music was completed and in February or March 2020. The original plan was to release Mambo Boulevard in May and the pandemic struck in March. Given the gravity of the pandemic, I decided to put everything on hold. Also, I lost a lot of fellow musicians. I didn’t feel it was appropriate. Also, I didn’t want to release the CD during the election. So, I decided to wait until Spring. With respect to the gap between recordings, I was planning, trying out the tunes, and staggering the cost of the recording. Lest we forget, it’s an independent recording. The entire process took about four years. In the end, I decided to plan, wait and do it right.

JDP: It shows! The production, the music, and the presentation are top-notch.

VR: Thank you. Thus far, I’ve gotten a lot of positive feedback. Also, the band is being recognized. My goal is to see the ensemble perform at international jazz festivals. The Bronx Conexion Latin Jazz Big Band is a working band and has been together for nine years. It’s a unit!

JDP: Are there any similarities between True Flight and Mambo Boulevard?

VR: I prefer not to put one over the other. True Flight featured the late, great trumpeter Claudio Roditi, John “Dandy” Rodriguez on bongos, tenor saxophonists Lew Tabackin, Lou Marini Jr., and Jorge Maldonado on guiro and maracas. Also, we had excellent arrangements and original compositions geared towards general listeners, Mambo Boulevard, with the exception of two tracks is straight-ahead LatinJazz.

JDP: The tracks you are referring to are Arsenio Rodriguez’s Mami me gusto and Orquesta Aragon’s Aprende muchacho.

VR: Yes, I’ve received a lot of positive feedback on those tunes. Also, the Latin jazz tunes are not abstract. Mambo Boulevard includes mambo, Cuban son, boogaloo, songo, timba, cha-cha, a bolero, and a lively descarga (jam session). The album contains something for everyone. I want the public to appreciate the band.

JDP: Obviously, until things open up, a live CD Release is out of the question but when they do, will you celebrate the release of Mambo Boulevard at the Nuyorican Poets Cafe?

VR: Of course! Also, I hope to film a video in June or July, for promotional purposes.

TP: Mambo Boulevard is a fine recording. It keeps the big band tradition alive; the repertoire is diverse, exciting, danceable. Also, as the liner notes state, it’s the next best thing to experiencing the Bronx Conexion Latin Jazz Big Band in a live setting. Mambo Boulevard is available on all digital platforms.

As an author and transcriber, his work has appeared in Modern Drummer, Percussive Notes, LP Newsletter, Music in Motion Films, DCI Music Video, Drum! Magazine, and Warner Bros. Publications. He is the author of The Art of Playing Timbales, distributed by Alfred Publishing. For several years Victor also published the semi-annual magazine Latin Percussionist.

Rendón holds a Bachelor of Music from the University of North Texas and a Masters degree in education from Hunter College in the New York City Public Schools. A successful clinician, he conducts workshops in Latin percussion styles. Also, Rendón is an LP, Sabian, Vic Firth, and Evans performing artist and educator.

In Memoriam: In Conversation with Mark Levine (2009)