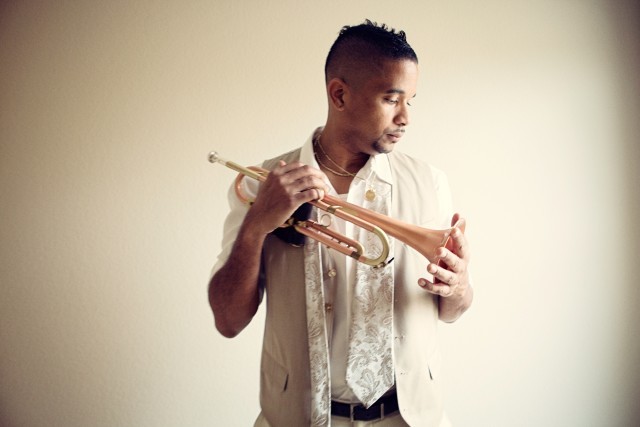 Trumpeter, vocalist and percussionist Pete Rodríguez carries the bloodline of Nuyorican salsa as he takes the tradition of Afro-Caribbean jazz to new places. The son of renowned salsero Pete “El Conde” Rodríguez and godson of Fania Records bandleader Johnny Pacheco, the younger Rodríguez cut his teeth backing up some of the great names in Latin music. He became his father’s musical director at the age of nineteen.

Coached by pianist Oscar Hernandez, the former director for “El Conde” and Ruben Blades, Rodríguez was playing trumpet, singing coro (chorus), playing maracas and giving cues to the band. As a vocalist, he sang on Tito Puente’s Grammy-award winning Mambo Birdland. As an instrumentalist, he’s appeared with legends including Celia Cruz, Eddie Palmieri, Chico O’Farrill, and Bebo Valdez. Now, as a bandleader, Rodríguez is drawing on these experiences to take his brand of Afro-Cuban jazz in exciting new directions.

Rodríguez’s music comes from a deeply personal place, reflecting on his connections to his father and heritage, as well as other unexpected influences. Rodríguez lived through the birth of Hip Hop during his early childhood in Bronx, New York. As a sharp contrast, after moving to Puerto Rico, he focused on classical music, performing trumpet with the Symphony of Puerto Rico at the young age of 15. While in the United States Army, he discovered his love for jazz and made it the focus of his professional and educational pursuits after leaving the military. The diversity of these life experiences can be heard both in Rodríguez’s compositions and playing style.

While pursuing his musical career, Rodríguez has also always made time for prioritizing education. He holds his bachelor and master of music degrees in jazz from Rutgers University. He obtained his doctorate of musical arts from the University of Texas at Austin in 2007. 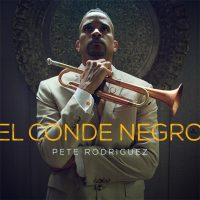 TP: Congratulations on the release of El Conde Negro.

TP: Shortly after your father, Pete “El Conde” Rodriguez’s death (2000), you put down your horn and “retired.”  Did you ever imagine you would return?

PR: After my father died, I became very depressed and stopped playing for three years. I started up again because I got a job, teaching music in an elementary school. Then I went back to school and obtained my Doctorate in trumpet. In 2008, I quit again after El Alquimista came out. I couldn’t find work.

TP: Several reviewers described “El Alquimista” as, “An attention-getter,” and “A new potent formula for jazz that deserves to be replicated,” but the recording didn’t receive the attention it deserved.

PR: It was a very disheartening time. I was angry and frustrated. Someone else might have handled it differently, but I can’t say I regret it. The situation inspired me to write a lot of music and pushed me in new directions.

TP: What came first, the birth of your daughter or the move to Austin, Texas?

PR: The birth of my daughter, that’s when my life changed. I was a stay-at-home dad for ten months, and it was the hardest job ever. My wife worked from home, and my daughter didn’t sleep a lot. I spent more time at Chucky Cheese, Barnes & Noble, and shopping malls than I care to mention. But when she was born things changed. When my daughter hugged me, it felt like my father was hugging me. I felt a strong connection.

TP: When did you move to Texas?

PR: In 2011. When I arrived, I was musically out of shape. After my first gig, I was exhausted, my “chops” were done, my dexterity was off. Around that time my daughter started school, and I started “shedding” (practicing) every day. I connected with a club called The Brass House, where I perform on Saturdays, and I organized a jam session as a way of giving back to the community. It’s one thing to practice at home and another to perform with colleagues in front of a live audience.

TP: How did you connect with Destiny Records?

PR: I learned about the label through a friend. The connection led to the album, Caminando Con Papi and El Conde Negro.

PR: I couldn’t listen to him. I’d cry. Also, I was blocked; I couldn’t come up with anything. Ten years later, I sat down at the piano and composed the arrangement for Tambo in twenty-five minutes. I started by singing the tune the way my father did, and experimented with variations. Also, I understated the vocals and highlighted the lyrics.

TP: Caminando con Papi marks the first time you sing on a project of your own.

PR: I wasn’t sure I would like it. I’m not trying to sing like a “salsero,” and I wasn’t sure what I would do harmonically. I didn’t want to transcribe the arrangement and sing it the same way. My father wouldn’t have approved of that. He was the first one to tell me, “You have to find your own voice. Don’t try to imitate me. I didn’t bust my ass singing and paying for you to go to college for you to imitate me.”

TP; Nate Chinen of the New York Times described Caminando con Papi, as, “A brilliant homage to your father.”

PR: Yeah, that went well. Many people liked what I did with Tambo and Cabildo, so I included five tunes by my father on El Conde Negro. One of Papi’s biggest hits is Catalina La O, and another is Soy La Ley. I was in the studio when Victor Paz recorded the trumpet solo on the original recording. There’s also a story behind the tune, Convergencia. My father was warned about messing with the song because “supposedly” a Puerto Rican couldn’t do justice to a Cuban classic. He proved them wrong.

TP: How do you go about interpreting your father’s material?

PR: I don’t listen to the original version because I’m afraid what will come out will be similar to what was done before. Also, I do it out of respect. I make sure that I know the lyrics and the melody and I pick a range, a starting note, see how high the tune goes and I find a comfortable register. Then I choose chords and harmonies, and I sing it in broken time. With Convergencia, for example, I thought how uncomfortable my father must have felt when people told him he couldn’t, or shouldn’t sing the song, and I tried to put myself in his state of mind. One week before we went into the studio I was at my mother’s house, and I was blocked, I couldn’t come up with anything, and my mother said, “When you go home it will come to you,” and it did. In a case of history repeating itself, I was warned about messing with Convergencia. I  couldn’t do it any better than my father. I took that as a challenge and composed. When you listen to the tune you’ll notice, towards the end, the drummer and I play “free.” That’s our reply to the naysayers, to those who said we couldn’t do it. Some people will like our interpretation and others won’t, you can’t please everybody. I sent a copy of El Conde Negro to (pianist) Oscar Hernandez, and he called to tell me how much he liked the album, which means a lot. Oscar is the person who coached me and made me the musical director I am today, and he played the piano on the original version of Soy La Ley. One question he asked is, how I came up with arrangements. I explained that my music is a mixture of many things. I grew up listening to my father’s music, Beny More, R&B, classical music and I lived in the Bronx during the birth of Hip-Hop. My music is a mixture of all those things and what comes out, comes out. It’s also the result of hard work, pain, struggle, and soul searching. I want to believe that El Conde Negro will take off and I can work and travel. I’d like to think nobody is doing what I’m doing. I think I might be only the son of a Fania artist and salsa legend performing in jazz in a Latin jazz format. For my next project, I want to include tunes by Celia Cruz and Cheo Feliciano. I’m considering tunes such as Anacaona, El Raton and Amada Mia. Cheo and my father were good friends.

TP: Tell me about the jazz side of El Conde Negro. 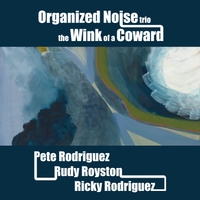 PR: I just recorded a new jazz CD with bassist Ricky Rodriguez and drummer Rudy Royston. The name of the group is the Organized Noise Trio, and the title of the album is The Dark City. Beyond that, I’m seeking management, booking, and a record label and I’ll be at Minton’s in Harlem on June 17th.

TP: Looking forward! I should mention, your sister, vocalist Cita Rodríguez is having an excellent year. She will be at Lehman College on June 10th, where she will present El Conde y La Condesa (The Count and the Countess) and at Jazz at Lincoln Center’s Midsummer Night Swing with the Mambo Legends Orchestra. She also has a new CD titled, En Un Homenaje a Graciela Perez (Tribute to Graciela Perez).

PR: The Graciela CD sounds great. My sister is ridiculously talented. I think it’s cool that we are carrying on our father’s legacy and interpreting his music our way. He would be proud. I will be in New York City on June 10th. I’m looking forward to it.