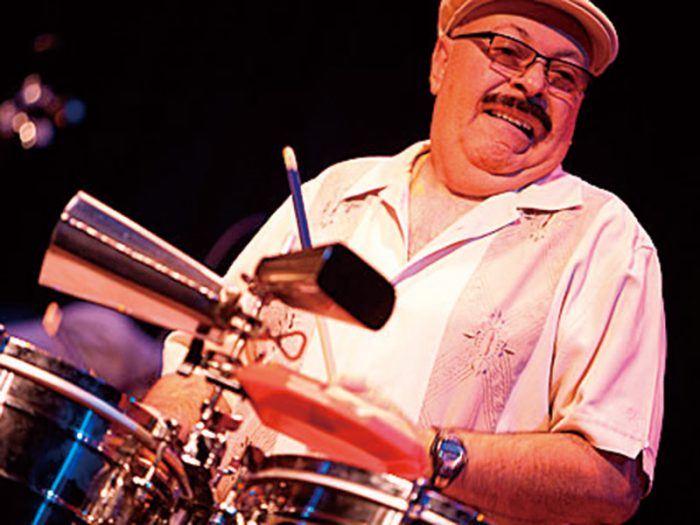 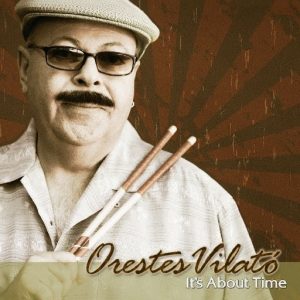 Born in Camagüey, Cuba in 1944, multi-percussionist Orestes Vilató is one of the most influential figures in the world of Latin percussion. His unique style on the timbales is one of the most emulated in the genre, and his artistry has graced the stage and recording studios with a Who’s Who of musical legends, from Aretha Franklin to Carlos Santana.

As a pioneer of the East Coast Salsa phenomenon, Vilató played a seminal role with such musical institutions and artists as the Fania All-Stars, Ray Barretto, Rubén Blades, Celia Cruz, Johnny Pacheco, and many others. After 25 years in New York, Orestes found new musical opportunities in Northern California as a member of the Santana band, forging a road into the Latin Rock genre, and as a result, his virtuoso percussion work would become a main fixture with numerous national and international artists, covering a range of styles from authentic Cuban music to Latin jazz, Salsa, Rock and beyond.

Since relocating to the San Francisco Bay Area in 1981, Orestes maintains his place as one of the most in-demand percussionists on the planet. In addition, Orestes continues to share his musical talent as a clinician for several prestigious music institutions such as Stanford University, UCLA, The Berklee College of Music, and the University of Anchorage. He has also recorded on the soundtracks for several highly acclaimed films, including The Mambo Kings, Our Latin Thing, and Dance With Me.

Considered one of the most influential Cuban timbaleros, Orestes Vilató maintains one foot in the rich tradition of his homeland and the other in the vast exploration of musical fusion in North America and beyond.

Tomas Peña: Welcome, Maestro! I understand your father was a musician and an opera singer. Also, he won your first set of bongos in a poker game.

TP: Did your father teach you to play the bongos?

OV: Sort of, my father grew up in the country, so he came from the Changui side, which is a pre-Son style.

TP: Your family moved from Camaguey, Cuba, to New York when you were twelve. Until you saw Tito Puente play the timbales, you weren’t thrilled with the idea of living in New York.

OV: I met Tito through my father, who helped Tito get a permit to open a ticket agency. The First Time I saw Tito perform was on television. Then I saw him at the Manhattan Center backing up Beny More. Also, Arsenio Rodriguez was there.

TP: I read that as a child you practiced relentlessly.

OV: I used to put the bongos on a chair, and I would make believe they were timbales and played the conga with my left hand. Also, I created a cymbal by attaching the top of a tin cracker box to a wire coat hanger. It made a nice crashing sound!

TP: Tell me about your first “unofficial” gig.

OV: It was with the Cuban Rhythm Boys, which had two trumpets and sax, the same configuration I have today.

TP: I understand you and your underage friends cleaned nightclubs to gain entry.

OV: Yes, I did that at the nightclub, The Ateneo Cubano, which was on 109th Street and Broadway (NYC).

TP: With who did you perform?

OV: Yes, in the beginning.

OV: He was Tipica Novel’s founder and one of the first guys who played the Charanga with Cuban timbales, bass drum, and a bell.

TP: After that, you joined Belisario Lopez y su Charanga.

OV: When Belisario came from Cuba, he performed at The Ateneo. He liked how I played and asked me to join the band. He took me under his wing.

TP: How old were you?

OV: I was sixteen.

TP: How did you meet (the Cuban flutist) Jose Fajardo and become a member of his band?

OV: My father picked up Cachao at the airport and brought him to Fajardo’s rehearsal at (the nightclub) La Barranca. Playing with Fajardo and Cachao was a dream come true. Cachao stayed with Fajardo for a while, then joined Tito Rodriguez’s band, and the rest is history.

TP: You and Ray Barretto go back. Tell me about your relationship with Ray.

OV: That was an exciting time for me because Ray gave me the green light to do different things. When I joined Ray’s band the Charanga craze was on the way out. There was a significant amount of development when Ray switched from the Charanga to the Conjunto format. That was around the time Acid, Mirame de Frente, and Arrepientete came out. I have said this before, and I’ll repeat it, Ray’s salsa band has yet to receive the credit it deserves.

TP: Through Ray, you subbed with Lionel Hampton, Thad Jones, and Mel Lewis, among others.

TP: The next question is from a colleague and collector who asked about the genesis of the album titled Raw.

OV: I made the recording when I was with Santana’s band. At the time, Santana was going on vacation, and he said something like, “While I’m away, you guys can do whatever you want.” So we got together and made a recording and a video. Sony Records picked up the recording, but for reasons I would rather not discuss, the record company took it off the market.

TP: Enough said. After 8 1/2 years with Ray Barretto, you Tipica ’73. To what do you attribute the group’s broad appeal and success?

OV: Tipica ’73 was a simple, organic group. We played sones and other Cuban tunes but, at the same time, Rene Lopez was doing ballads in English. In addition to such an extraordinary versatility level, we had connections in the Latin music scene because Johnny Rodriguez Jr. was good at getting work. We worked in nightclubs, theaters, graduations, etc.

TP: After Tipica ’73, you formed Los Kimbos with Adalberto Santiago. The group recorded four albums for the Cotique label, after which you packed your bags and moved to the West Coast.

OV: In 1975, Santana called me and offered me a gig. At the time, his band had changed management, and things were shaky. Also, I was under contract with Fania Records to do three more albums with Los Kimbo’s. I told Carlos that I was under contract, and I wasn’t sure if I was ready to go into Latin Rock. In 1980 he called me and invited me to participate in the album Zebop () and tour with the band. At the end of the tour, he invited me to join the band. To make a long story short, he moved me and my family to California, all expenses paid.

TP: How difficult was it for you to make the transition from Salsa to Latin Rock?

OV: It’s like going from Spanish to Japanese. I had to find a way to fit in with the band without disturbing my concept (style). I haven’t said this to anyone, but I thought of leaving the band, but a strange thing happened. I received a cassette tape from Changuito (Jose Luis Quintana), who must have read my mind. He told me it was not a good time to leave the band and not worry that my music would always come through. I stayed with Santana for another four years. Around the same time, I received a letter from Marty Cohen of Latin Percussion. He saw the band perform in New York, and he congratulated me on my ability to approach Santana’s music without compromising my style. That meant a lot to me.

TP: And you proved, “There is life after Santana!”

OV: I’ve heard many people say that when I was with Santana, and it stayed with me. There was life after Santana! I recorded with Linda Rondstadt and Cachao. Also, I recorded Ritmo Y Candela – Rhythm at the Crossroads () with Carlos “Patato” Valdes and Changuito, which won a Grammy.

TP: The Rhythm at the Crossroads series are classics and high on my list of spectacular recordings. I play them often.

OV: We went into the studio without preconceived ideas of what we were going to do. We laid down the percussion, and later, flutist John Calloway arranged the music.

TP: You have a long-standing relationship with the percussionist, educator John Santos, and the Machete Ensemble. Tell me about working with John and the significance of the group.

OV: I call the new group “Machetico” because it’s a small version of the Machete Ensemble. John is a great guy; he is family. I started recording with the Machete Ensemble when I was with Santana. Over the years, John and I have made quite a few recordings and done a considerable amount of touring. When John scaled the Ensemble down, we performed at colleges, doing clinics, and recorded Papa Mambo ().

TP: Another great recording. Before we go on to your first recording as a leader, what have you been up to?

OV: With the help of the pianist, educator Rebeca Mauleon, I’m writing a biography.

TP: I look forward to reading it. I wish more musicians would take the time to document their lives and careers.

OV: I agree. I don’t know if you know who Miguel “Anga” Diaz was, but he was a genius. He died young and never told his story.

TP: Who can forget the great Anga? He died young and left us too soon. Ray Barretto is another iconic musician who died before he was able to tell his story. Ironically, he was working with the writer, historian Juan Flores at the time of his death. That’s why the book never came to fruition.

OV: When someone writes a book about Ray, I would like to be part of it. He was like my uncle and my big brother. I told his wife, Annette, Ray, and I were Batman and Robin. When I was a teenager, he took me to see Thad Jones and Mel Lewis. We were friends for so many years, like family. Ray was the person who told me to listen to all kinds of music. That always stayed with me.

TP: Tell me about the album (appropriately titled) It’s About Time ().

OV: The concept is simple. It’s everything we discussed, things that stayed in my mind, pieces of melodies, remembering all the bands I played with, and tunes I heard as a kid.

TP: Speaking of Ray Barretto, tell me about the tune, Remembering Ray.

OV: I had Joey Leon, the son of the conga player, Bobby Rodriguez, on the congas. He even tuned the drums like Ray. Also, there’s an obscure tune for Cachao (Las Boinas de Cachao). Carlitos del Puerto transcribed Cachao’s solo and added his arrangement. Bringing the song to life was like receiving Cachao’s blessing.

TP: You’re a firm believer in the adage, “Less is more.” As opposed to flashy players who take long and often unnecessary extended solos.

OV: Johnny Rodriguez used to say extended solos sound like a popcorn machine, and they do!

TP: Tommy Lopez Sr. used to say, extended solos sound like a garbage can rolling down a flight of stairs! (As told to me by Steven Kroon).

OV: When I started out, there were many great players: Orlando Marin, Kako, Willie Rosario, and others. The competition was intense, and I was young and flashy, but it’s too much. Timbales don’t even sound like timbales anymore.

TP: You have a nickname for flashy players.

OV: Billy the Kid, the fastest gun in the west, who got himself killed!

OV: I am satisfied to have been part of something. For now, I’m more concerned with what I have to do and the road ahead.

TP: Thank you, Maestro, for speaking with me.

In Memoriam: In Conversation with Mark Levine (2009)