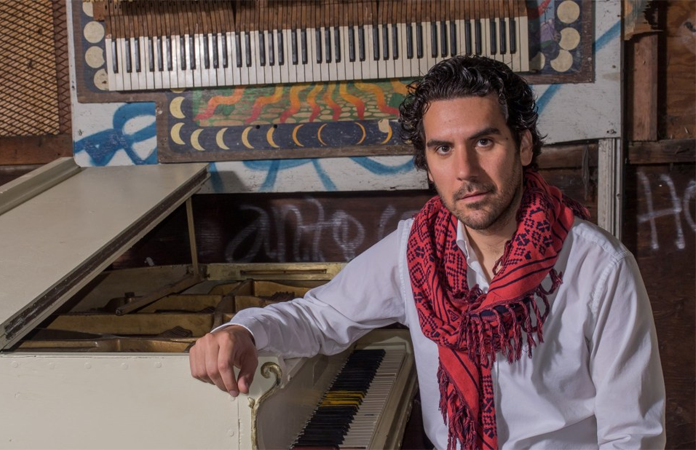 “What is it about Monk’s music that makes it so ‘ripe’ for interpretation? It’s because he’s so hip in so many ways.” Alex Conde 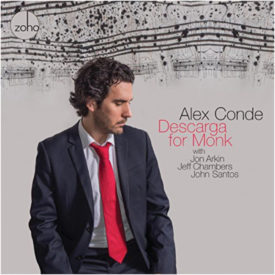 Alex Conde was born into a family of artists indigenous to Spain. His father, Alejandro Conde, is a superstar singer in the style of “Cancion Española.”

Conde graduated in Classical music from the José Iturbi Conservatory of Music in Valencia, Spain, and Piano Jazz by el Liceu de Barcelona. He moved to Boston in 2007 to attend the prestigious Berklee College of Music on a scholarship. While there, he studied with Danilo Pérez, Wayne Shorter, Maria Schnieder, Joe Lovano, George Garzone, David Santor, and Esperanza Spalding among others.

Conde released his first album, Jazz, and Claps with artists from all over the world (Greece, U.S., Japan, Spain). In 2008, he was the recipient of the Berklee College of Music’s Jazz Revelation Award.

In 2009, after graduating from Berklee, Conde moved to San Francisco, where he continues to collaborate with many Flamenco companies. He has collaborated with flamenco artists such as Nino de los Reyes, José Luis Rodríguez, Kina Méndez, Coral de los Reyes, and José Valle “Chuscales” among others.

Alex Conde has performed in Jazz and World Music festivals with top jazz artists such as John Patitucci, Danilo Pérez, Dave Samuels, The Bad Plus, and Wayne Shorter among others.

His unique style of traditional flamenco, classical technique, and jazz make him one of the foremost exponents of the genre.

Tomas Peña: Monk’s music has been interpreted by countless players over the years. What attracted you to his music?

Alex Conde: Monk is the most popular jazz musician of all time. He was the first jazz musician to appear on the cover of Time Magazine! And of course, his music is unique. During the bebop era, many jazz musicians were imitating Charlie Parker’s high-speed style. Monk came out with a unique sound – medium up-tempos, never too fast, and with the most special touch, the chord in a cluster! His compositions are harmonically complex, but they always have a clear direction. What he created was unique; it set him apart from the jazz composers of his time. Although it took a while for Monk’s music to receive the recognition it deserved, history finally recognized him as the most popular jazz pianist of all time.

TP: As I understand it, the original concept for Descarga for Monk sprang from the idea of adapting Monk’s music to a “bulería de jerez” style.

AC: Yes, it began with the tune, “Played Twice.” The “bulería de jerez” is the way bulerias are played in the region of Jerez, Cadiz (Spain). Not too fast, with a feel on the 3/4 combined with a 6/8, it’s hard to explain in words … bulerias are free forms, improvised, and played at parties; they are the most joyful palos in the flamenco style.

TP: In the liner notes, you write, “It would be sweet to see those 16th notes on the B section with a flamenco tap dancer!”

AC: Yes. It’s something I would love to see one day. Monk’s rhythms and pulse are as unique as a flamenco dancer’s footwork – strong and tight.

TP: Going into the project, what were the challenges?

AC: Finding the right musicians, figuring out the versatility between musical styles, and creating a coherent album that respects tradition. We play swing up-tempo, medium tempo, bulería, solea, Afro-Cuban 6/8, and Latin jazz. I was fortunate to have some of the best musicians in the Bay Area – Bassist Jeff Chambers, drummer John Arkin, and special guest percussionist John Santos, who plays on three tracks.

TP: Tell me about the repertoire.

AC: I chose the compositions because I connected with them and made them my own. As a result, I was able to re-imagine them naturally.

TP: You breathe new life into Monk’s music. I am particularly fond of the tunes, “Round Midnight” and “Evidence.”

AC: Thank you. It took me a while to decide how to arrange the tunes. On certain occasions, the music came to me quickly, which is always a good sign. On other occasions, finding an alternative interpretation was a process. In a case like that, I usually drop the song and move on to something else. If it takes too much time to arrange a song, it tends to sound forced and unnatural.

TP: Tell me about the supporting cast and what each artist brought to the project.

AC: Jon Arkin is a versatile drummer. He’s creative, his tempos are solid and he plays on top of the beat, which is very important for me because it’s the way I like to “feel” the drums. He’s also an excellent Latin jazz player; his playing is flexible and in clave with a natural expression that blended perfectly with John Santos. Jeff Chambers is a veteran, he’s recorded and toured with Ahmad Jamal, Gonzalo Rubalcaba, Benny Golson, McCoy Tyner… he can play swing and/or Latin jazz like no one else and his bebop solos are authentic. I feel honored to have him on the recording. John Santos is a master of percussion and the Afro-Cuban style. I collaborated with John and his sextet at a jazz venue in San Francisco, and I loved the vibe, and the energy he projects. He puts the band in a comfortable mood to create music on the spot. We had a great time, and I can’t wait to share the stage with him again.

AC: I looked John up on the Internet, and I found an album he recorded at La Peña Cultural Center, where he played the cajón. His playing was extraordinary! It wasn’t the traditional Peruvian sound; it had a shaker sound, which is produced by putting guitars strings into the cajón. I totally fell in love with his sound! So, I just asked him to perform the cajón on that track, and he played great!

TP: I believe the album, you’re referring to, is: “Musica Afro Caribeña, Cubana, and Peruana … 4 Maestros,” featuring Tito González, Coco Linares, Pedro Rosales, and John Santos. Your mother and sister provide the compas, handclaps, and a little touch of home.

AC: Yes, flamenco music is based on two elements, cante and voice (singing) and compas, which is palmas and jaleos. We recorded the claps on two tracks.

TP: The recording sessions took place at the world-renowned Fantasy Studios, where Mc Coy Tyner, Bill Evans, Chick Corea, and others recorded in the past.

AC: The pianos at Fantasy have such an old, beautiful sound. It’s so inspiring to be playing where these legends have recorded. Also, the staff is highly professional. In many situations our sound engineer, Adam Muñóz read my mind. The staff makes you feel at home; they have a long history and experience.

TP: Looking back on the sessions, are you happy with the results? If it were possible, is there anything you would change?

AC: I’m rarely satisfied with the results, but I’m happy with the recording. We had so much fun I would gladly do it all again!

TP: Your take on the commonalities between American Blues and Spanish Flamenco is interesting.

AC: Both came out of slavery and oppression; both come from vague resources of instrumentation. You can feel the black rhythm and the swing is the same.

TP: When will Descarga for Monk be released?

AC: Zoho Records will release the album on February 1oth, 2015.

TP: Thank you, Alex. Descarga for Monk is an exceptional recording. Journalist Bill Milkowski’s liner notes sum up the album nicely. He writes, “This re-imagining of Monk’s music awakens the senses in a very profound way. It will make you sit up and shout “Ole!”